So apparently Dennis Rodman has gone full dictator mode and is completely f***ing up American foreign policy. For whatever reason he’s become BFF’s with everyone’s favorite dictator Kim Jong Un, and being that it’s his 31st birthday, Rodman put a crew of NBA has beens together to play a friendly with the North Korean national team.

But what about North Korea’s well documented human rights violations? Well a CNN reporter asked Dennis Rodman about that, and things got a little bit testy….

It’s safe to say that the State Department would’ve been much better off sending Forrest Gump over there for some pingpong.

I think the question we all want to know is, how is Vin Baker going to get his shots in a country that doesn’t let you drink alcohol? Watching Chuck Smith, Doug Christie, Cliff Robinson, Kenny Anderson and the rest of those schmucks realize on national TV that they just made a really bad life choice was painful to watch. You know what sounds like a really bad idea? Going to North Korea. You know what sounds like a worse idea? Having Dennis Rodman lead you anywhere.

And since when is CNN broadcasting the WWE? I mean, I know Dennis Rodman isn’t exactly known for being a rational or smart human being, but that looked like the Macho Man Randy Savage detailing what he’s gonna do to the Ultimate Warrior.

If I’m the U.S. team, I’d probably throw this game on purpose. What with the whole “feeding your uncle to hungry dogs” thing that Kim just pulled. Either way, someone’s going to lose this game and will probably end up in a work camp for the rest of eternity.

Look, we all know that Dennis Rodman is a complete moron. But like, is it even possible to be this dumb? I mean, the fact that a grown man can say about the world’s most notorious dictator, that Kim is his “friend for life,” and is “trying to change this country in a great way” led me to believe that Rodman has gone full…..never mind. 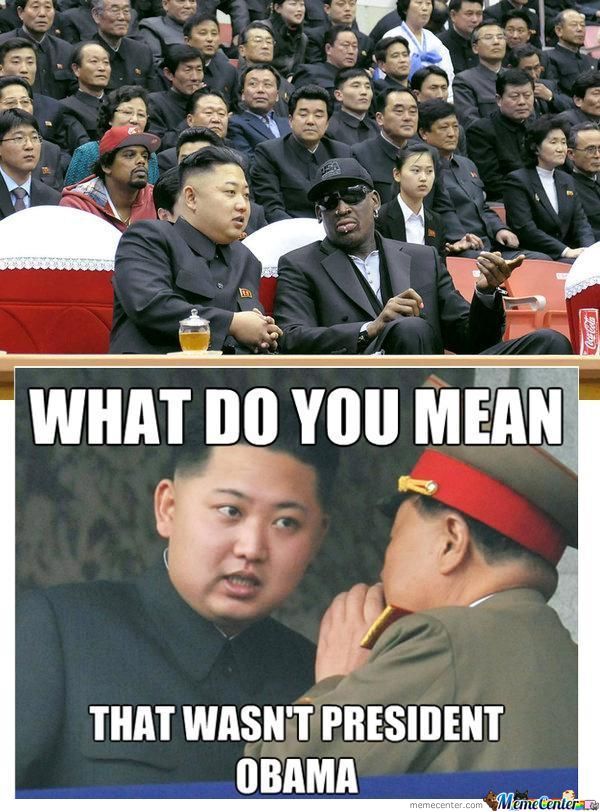 But seriously, he can’t possibly mean that – right? I mean hundreds of thousands of people spend their entire lives in North Korean labor camps if their grandparent tried to taste the sweet delicious freedom of South Korea. They’ve got no food, their national anthem is filled with lyrics about Kim making the stars and the moon, and they think they can nuke San Francisco even though they haven’t figured out how to use a rocket. And Rodman thinks he can just fix all this with a game of hoops? Gotta give it Rodman I guess. John Kerry and Hillary Clinton have been trying to deal with this madman for years with stupid crap like diplomacy and sanctions. Turns out all you have to do is just tell him happy birthday and introduce him to Kenny Anderson.

Worst case scenario Rodman turns into a traitor and the rest of the poor idiots that went along with him are all put into labor camps. Best case scenario North Korea keeps Dennis Rodman and he can see how awesome North Korea the first time he has a disagreement with his new friend.