So apparently there is someone out there who took more emasculating engagement photos than I did, and that would be Washington Nationals outfielder Bryce Harper. 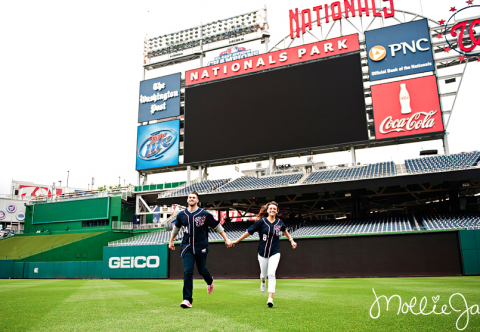 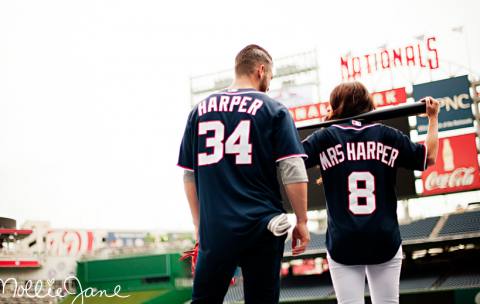 How dumb are these two? I mean, you guys look like you just won the best couple award in the yearbook. Newsflash – you’re not supposed to marry your high school sweetheart. That only happens on Boy Meets World. In a place I like to call reality, you just say you’re gonna be with your high school sweetheart forever because you don’t know any better. Then you grow the fuck up. That’s how nature works.

My question for Bryce is, what the hell is wrong with you dude? You’re 21 years old. You’re a millionaire who can have any girl he wants and you’re choosing to settle down right now? Do you understand how upsetting this is to men across America who settled down because they simply ran out of options? That’s how love is supposed to work. You get married when 21 year old girls start calling you “creepy” and you have to start lying about your age.

You know what country people get married at the youngest age on average? Afghanistan. Your average Afghan gets married when they’re 20.2 years old. That’s the company you just joined. Afghanistan. Nice going. And do you know why they get married when they’re 20.2 years old in Afghanistan? Because the village elder made them in exchange for three goats. This is America bros. You’re allowed to actually enjoy your 20’s here.

The most important thing to point out here is that obviously this marriage has a shelf life of five years max. I’m gonna go out on a limb and assume Bryce Harper is a dumbass and didn’t agree to a pre-nup. When she takes him to the cleaners and his MLB career is done because he can’t stay healthy he’s gonna have to resort to getting a real job. And that’s gonna suck for him.

Does Bryce Harper realize what he does for a living? He plays professional baseball. Dude, you’re always gonna be on the road. You’re gonna be living like a sailor – different girl at every port. Newsflash – you might think you’re in love right now, but you’re going to cheat on your wife. Probably a lot too. I don’t know much about you, but you seem like a giant dooshnozzle based on this interview:

So no, I do not believe for one second that you’re gonna be able to resist temptation wherever you go. I understand why SHE’s doing it, because women are in a constant race to beat their friends to marriage. But you? That’s a clown question bro.

I’ll never understand the early marriage thing. Like, when we went to Dallas last year for a bachelor party there was a bachelorette party at the same place we were at. The girl who was getting married was 25, which made her the old hag of the group. She was literally the only one who wasn’t already settled down with kids. What is wrong with these people? Doesn’t anyone in the bible belt wanna get really messed up and make some bad decisions?

Here’s the Top 5 states for getting married young:

You know what all five of those places have in common? They all sound like terrible places to live. Meanwhile here’s the top five for oldest marriage states:

Once again Massachusetts has to show the rest of the country how the marriage game works. That’s because people like actually enjoy life here. We like to go out, cause havoc, and listen to our Mom’s lecture us about hanging out with the wrong crowd. The girls too. You think Snooki is some sort of anecdote? Nope. Par for the course in the northeast.

So the lesson here is that Bryce Harper is an idiot who just made the worst decision of his life. The end.