We Dug Up The Police Report That Confirms That Mike Padeiro, Of Mike And Wayne’s Uniform Accessories, Did Indeed Shoot And Kill His Wife Heidi Patnaude Yesterday Wayne Oliveira, the owner of Mike and Wayne’s Uniform and Accessories in Fairhaven defended keeping “Mike” in his businesses’ name, despite the fact that Mike Padeira killed his wife and then himself in 1989, because “no one knows what happened,” thus indicating that he might not have murdered Heidi Patnaude. If that’s his reasoning for not changing it then maybe we got something wrong. So like we always do we wanted to get our FACKS straight and went and got the police report from that fateful day in April of 1989. Here it is: Says right there – shot by husband. They could’ve chosen to check off “pending investigation,” “could not be determined,” or “accident.” They chose to check off “homicide.” She was shot in the back initially and it went through her chest.

Here’s the report about it in the newspaper: 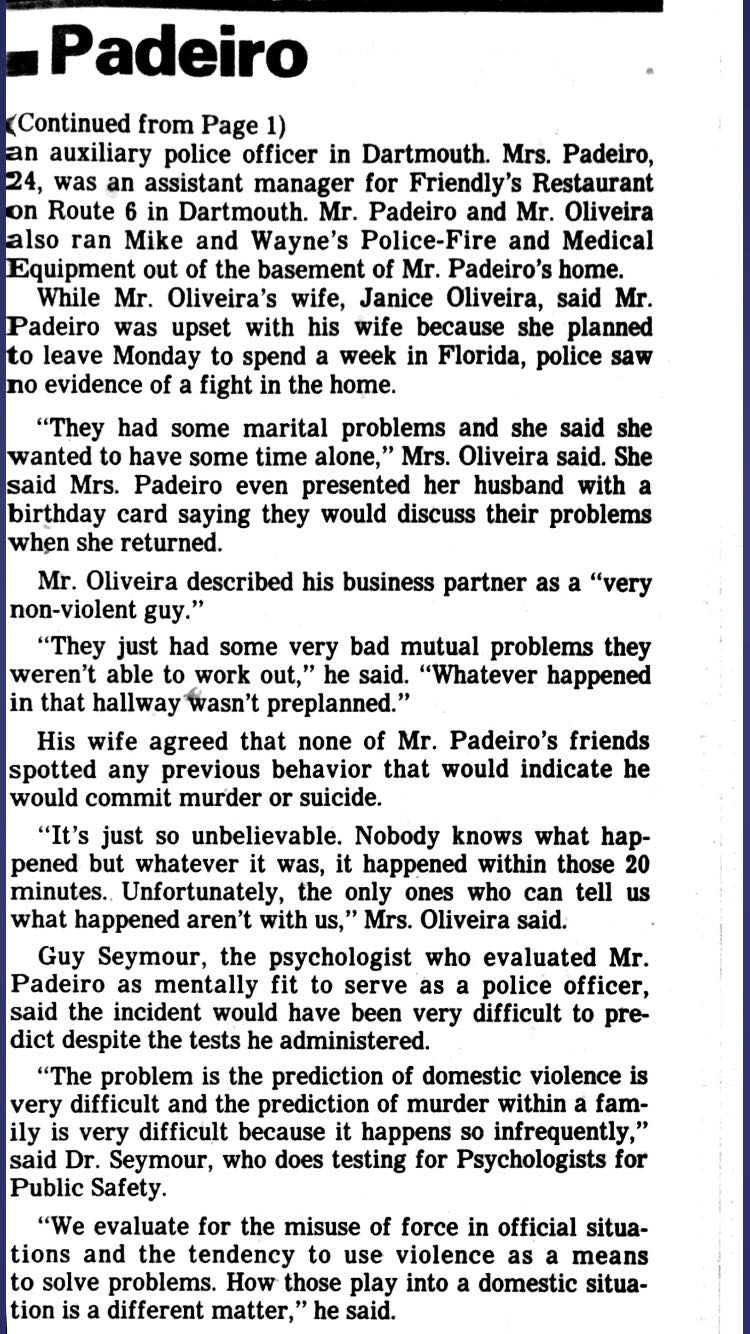 “Nobody knows what happened but whatever it was, it happened within those 20 minutes. Unfortunately the only ones who can tell us what happened aren’t with us,” Mrs. Oliveira said.

Oh OK. So because they both died we’re just gonna have to chalk this one up as a cold case. I guess that’s the way to avoid forever being labeled as a murderer – kill yourself. Then you’re officially not guilty. Worked for Aaron Hernandez.

“Police saw no evidence of a fight in the home.”

In other words, any idea that she attacked him and he shot her out of self defense is patently untrue. Two people were in that house. He killed her by shooting her in the back. The police say so. Yet they continue to name their store after this guy anyway.

Yet there’s no shortage of morons who are insisting that there are “unanswered” questions. Oh, and this washed up sea skag is mad that Phil posted the exact words Wayne told him.

How dare the media report what a source told them!!

If you were one of those people who said we were out of line on this one, this is your reminder that we were right. Imagine being the family of Heidi and having to drive by that store and be reminded that it’s named after the guy who killed her. Imagine going on their website and seeing this garbage. Is it free speech? Sure. Is it a dick move? Of course. Do people have a right to know about this? Absolutely.

Look, I get why people would be loyal to the guy, especially his family. I watched last week as the guy from Colorado who killed his wife and two daughters was sentenced to life in prison. His mother spoke to him, crying her eyes out, and said she still loved him and forgived him. It was really emotional and hard to watch. I get why she did it – because true love is an unstoppable force of nature. But what she didn’t do is insist that small businesses keep his name on it, because she knows that his name is forever damaged goods. Being sad about the tragic death of two people is one thing. Memorializing a killer is a bridge too far.