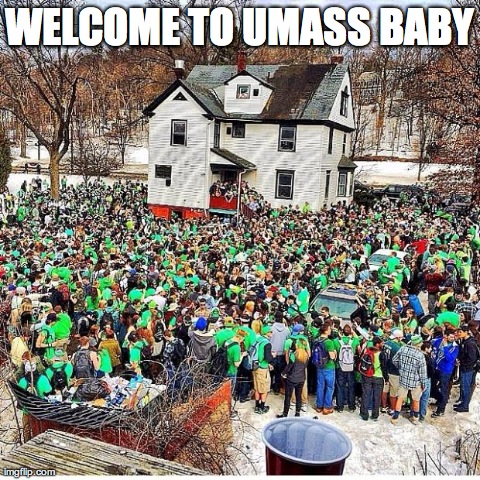 So the UMass Blarney Blowout is still dominating the news. Over half of the 73 students arrested  were arraigned today. There was also apparently some sort of protest at the Student Union, which marched its way over to the Admissions building.

My thoughts on this are pretty simple: both sides are wrong here. As we wrote the other day, if you’re one of the idiots who got arrested, you probably deserved it. When you’re in a crowd of thousands of people, always, always stick to the middle. Haven’t you idiots ever watched National Geographic before? You know which antelope gets eaten by the crocodile? The first one that goes down and sticks it’s head in the water. The rest of the antelopes just watch the guinea pig go first, wait to see if the coast is clear, and then go and get them some water.

Same thing applies here. You wander too close to the cops in a failed attempt to have a rational conversation with these meatheads in uniform, don’t expect some sort of civil discourse. That’s how it works. The police have absolutely zero interest in exchanging in a dialogue with a bunch of drunken 19 year olds.

With that being said, the police in Amherst absolutely suck. I went to school there for four years, and let me tell you, the police there always rubbed me the wrong way. Anyone who attended UMass from 2000-2004 can recall Officer Ting. He was like the Elliot Ness of Amherst. LIVED to arrest college kids for being college kids. 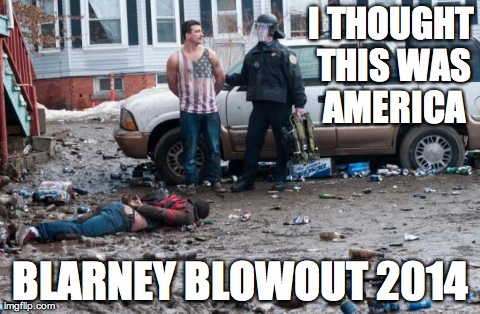 Look, the way that UMass was put together, it was like they were inviting a giant party school.

Newsflash: by accepting 20,000 undergraduates to attend your school, and then jamming 6,000 of them into half a square mile of land in Southwest, you’re ASKING for this type of behavior. This is what always annoyed me. You don’t want kids to riot in Southwest all the time? Don’t build five towers down there. UMass was literally designed to be a party central.

I also have absolutely no sympathy for the people of Amherst who are disturbed by this. Anyone stupid enough to buy property anywhere near UMass deserves everything that comes their way. Your realtor probably should’ve told you that drunken hooligans from South Hadley are gonna urinate on your lawn every other weekend.

So yea, that cop is obviously a giant dooshnozzle on a power trip. Any normal human being tells the drunken idiot to take his fat ass inside the house now…or else. But not this guy. He just goes right for the pepper spray, and not just a little pepper spray – all the pepper spray. Because I’m sure he was obviously threatened by a drunken fat bastard with his hands in the air, who clearly wasn’t approaching the cop at all.

A girl named Olivia Kennis recently wrote a blog on the police brutality that’s gone semi-viral. Basically, the point she makes is that the police in Amherst aren’t there to protect students. They’re there to beat the shit out of them. She argues that the “riot” was not a riot until the police showed up and made it that way. And ya know what? Girlfriend is 100% right.

The policy of the Amherst police with these giant UMass parties should be pretty simple – stay on the sidelines, keep an eye on things, and arrest morons who should be arrested for the public’s good. That’s it. Lining up like peacekeepers who are about to putdown all discussion of the Mockingjay in District 11, doesn’t exactly help diffuse the situation. By forcefully marching upon a bunch of kids who are pounding beers and trying to get chicks to make out with each other, the police then make themselves the cause of the violence.

It’s one thing if they were going through the crowd in order to break up a fight. That’s protecting the safety of students. But from what I’ve seen and read, they didn’t do that.

Not once in my time there did I ever feel like the police were there to protect me from violence. I felt like they were there to bust me for an open container, which half the kids arrested the other day were charged with. The students had their day in court today, and guess what? Most of them don’t even go to UMass. How bout that? I don’t wanna judge a book by it’s cover, but let’s do that anyway. Check out some of these menaces to society in court today: 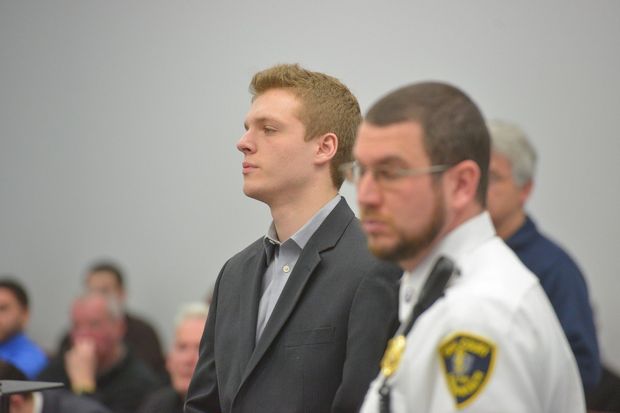 Strike one, your name is Calvin Diamond. Strike two, you seem like exactly the type of guy that makes people think that UMass is for drunken trust fund babies. Strike three, you’re charged with assault with a dangerous weapon. Let’s be honest, if this kid got pepper sprayed, would anyone be outraged? 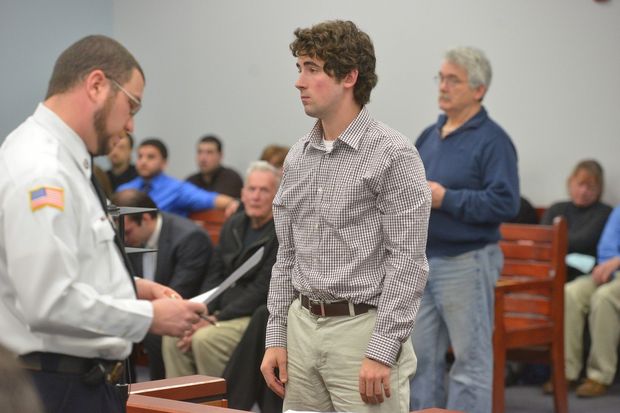 Everything about this kid reeks of the college life. Wrinkled khakis. “I don’t give a f***” haircut. The, I just rolled out of my prison cot and straggled into court outfit. This kid is completely out of his element without a backwards hat and a backpack full of keystones. 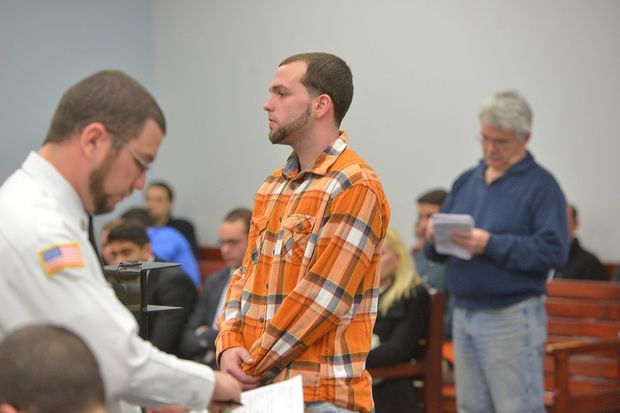 OK, would you be upset if he was pepper sprayed? You should, because that would hurt a lot. Awesome chin strap bro. 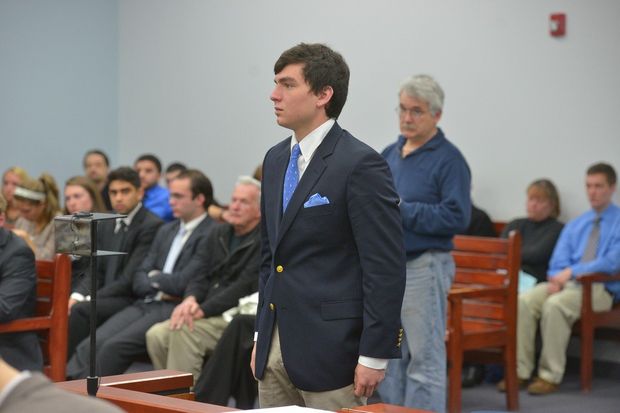 By far the most nervous kid arrested. Obviously came dressed for success. Matching handkerchief and tie is just a killer outfit. Well done. Probably not used to parties like that at boarding school though. 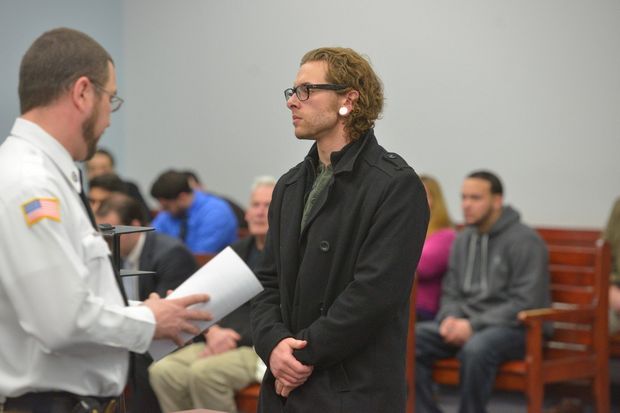 Pretty sure this poor guy just got caught up in the riot on his way to Starbucks. 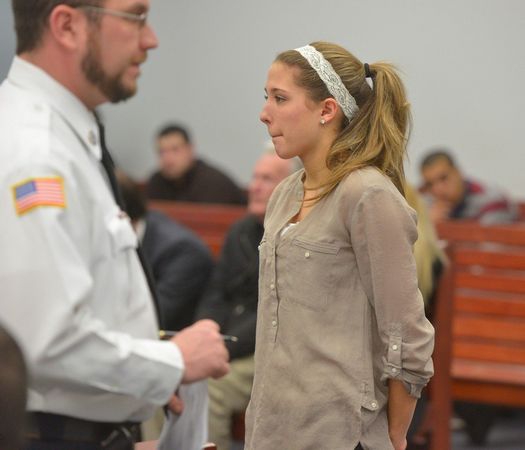 Well if this girl doesn’t look like a menace to society than who does? That’s one cold faced killer right there. Thank you Amherst police, for protecting all Amherst citizens from this obviously dangerous human being. 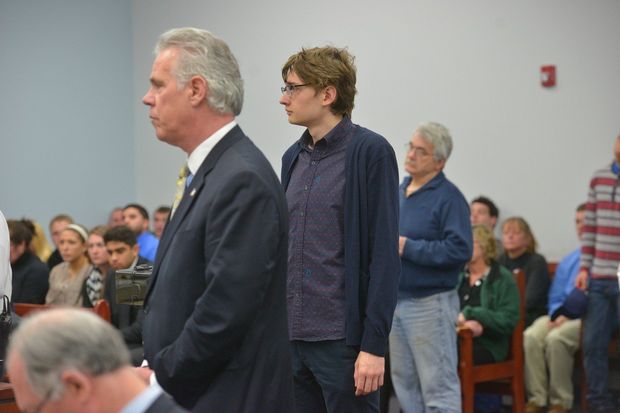 I’ve never met Ivan before, but I’m willing to bet he could beat me in chess in four moves. Does Ivan here look like the kind of guy who would incite a riot? Maybe I could picture him hacking into my computer, but other than that he looks like the definition of harmless.

Well it turns out, he might be the only person arrested in this who actually had nothing to do with the Blarney Blowout. Poor Ivan was trying to get to his home in Brandywine after the cops broke up the party there. The police saw this obviously threatening individual in a librarian’s sweater and decided to put an end to his reign of terror. They did the only logical thing a civilized police force does in a civilized society: beat the shit out of him and pepper sprayed him into submission.

Well, this guy right here might be the UMass student body’s best hope in getting the cops to stop acting like meatheads. That’s because just as predicted, he’s a computer science major, about to graduate in only three years. If this was 1957 I might be cool with this. But the Cold War is over. AKA he’s the type of student UMass wants. He’s not a drunken hooligan. It actually turns out that he doesn’t even drink:

“Sometimes I try a craft beer but I don’t get drunk.”

Good thing the police protected us from this wild animal.

At the rally today, there were a little over 100 people there. Typical. UMass kids have the attention span of your average four year old. All fired up about police brutality. Demand change. Take a bunch of bong rips instead of showing up at the protest. Instead it was the usual protesting suspects. A collection of hipsters… 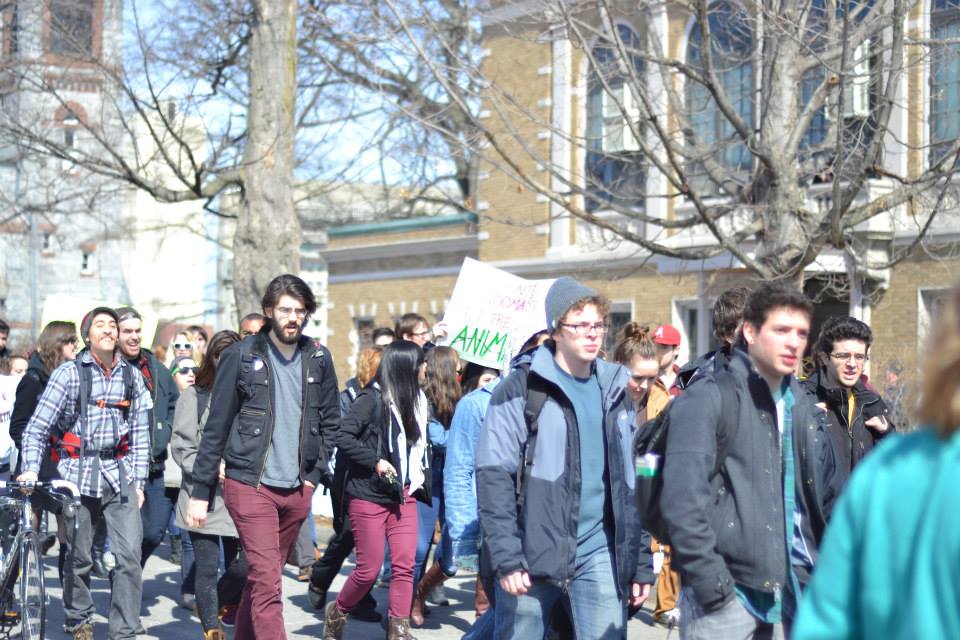 elderly hippies with nothing to do at noon on a Tuesday… 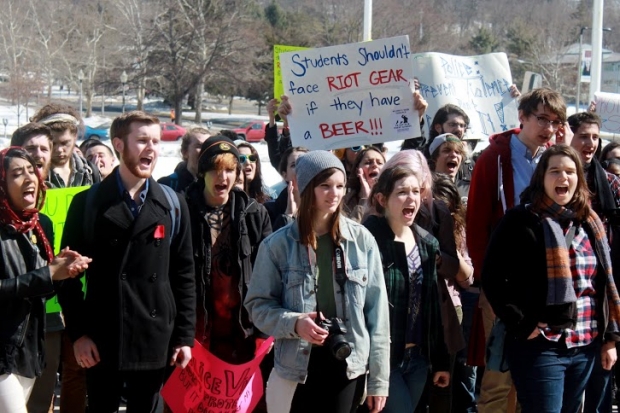 Look, if you went to UMass you’ve seen these before. These are the nudniks that hang out at the Student Union all day looking for some liberal cause to protest. Minority enrollment down .02 percent? Defense contractors save money on their taxes? Dorms don’t have a transcended bathroom? These guys will fix all those problems by yelling into a megaphone and telling their fellow students to “fight the power.” Which of course means going back to their dorms and eating Ramen noodles.

I was disappointed when this is what the protest turned out to be. It had a lot of potential. Thousands of students have a right to be pissed off by the way they’re treated by the police. But that’s why it’s probably gonna continue for years to come. The people that get their faces bashed are a bunch of morons who would rather take a nap to come down from their hangovers then actually get involved and do something about it.

There is only one hope for UMass students who want to see the police’s reign of terror come to an end: Ivan Rudovol. We got your back you beautiful Russian bastard.