Editor’s Note: Pat Tillman was an American hero. We point this out because some people are butthurt that we’re blogging about Aaron Hernandez and NOT about Pat Tillman. Because apparently you cannot respect the sacrifices made by Pat Tillman while simultaneously enjoying a bizarre story about a former Pro Bowl tight end’s prison butt buddy. So we just want to set the record straight before blogging about Hernandez again – we believe Pat Tillman was an American hero, and the world would be a better place if he was still alive. Now that that’s out of the way, Larry Army Jr, the lawyer for Aaron Hernandez’ white chocolate prison cupcake, adressed the media today to discuss Kyle Kennedy’s relationship with Hernandez. And it was a shitshow:

Here’s some of the highlights:

The fact that Kyle Kennedy’s prison bitch nickname is “pure” is the greatest thing I’ve ever heard. Almost spit out my coffee when I heard the lawyer say that. Pure wangsta!! Alright, first of all, if Jose Baez says they weren’t lovers, then they were probably lovers. Because Jose Baez is a lying gutterslug with a briefcase who only represents high profile, guilty clients, and finds ways to set them free.

Secondly, the watch thing is such a scam, and Larry Army is hardly any better than Jose Baez. He’s just looking for his piece of the pie. There’s no proof that Kennedy was promised this watch, except for some alleged pillow talk from Hernandez. More than likely Aaron just told him this so he’d be down for a late night cuddle sesh.

Thirdly, the fact that these two requested to be bunkmates is the greatest thing I’ve ever heard in my life. Five years ago Aaron Hernandez was seconds away from being named Super Bowl MVP. Fast forward to the present, and he’s begging CO’s to share a bunkbed with this guy:

Once again. Gigantic mansion, beautiful daughter, $40 million contract. Not nearly as appealing as the thought of being the big spoon with this face on a nightly basis: Fourthly, the fact that Pure White Chocolate thinks he gets to hold a press conference about who was the chocolate chip cookie and who was the cream filling in his relationship with Hernandez, is hilarious. But if somehow this does happen, it might be the greatest press conference of all time. However, I’m pretty sure prisoners don’t give press conferences. Either way, I’m getting aroused just thinking about the gold material that would come out of that.

Fifthly, Larry Army might not have confirmed that they were lovers, but the fact that he provided a note from Hernandez to Kyle Kennedy’s Dad is all the proof you need. He was playing meet the parents already. Plus, he’d already been taking part in conference calls with Kyle’s homeboys for months before that. 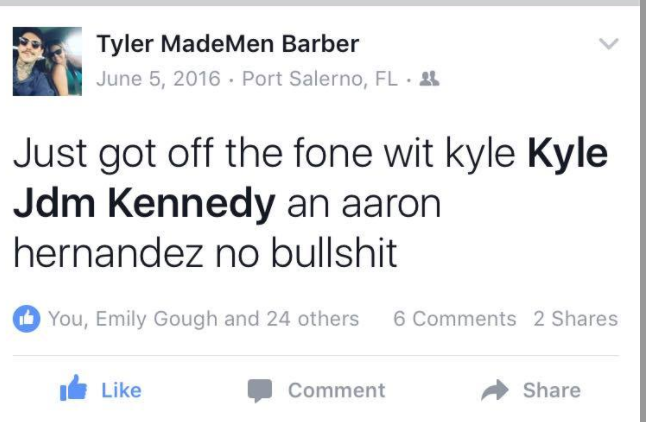 Sixthly, screwing Pure White Chocolate over on the way out is the most Aaron Hernandez move ever. Dude was the most selfish person who has ever lived. The fact that he was promising this nudnik $50K watches that he had no intention of giving him, so that Kyle Kennedy would allow Hernandez to treat him like he was a lump of dough in a pizza shop, is so Aaron Hernandez it hurts. The only thing that hurts more was Kyle Kennedy’s glory hole.

The long and short of it is that Aaron Hernandez knew he was gonna kill himself the whole time. He wanted to get his rocks off while he was in the can, so he pretended to be in love with the prettiest face he could find. He promised him a bunch of shit, and even humored his family and friends. But at the end of the day Hernandez was smart enough not to put any of these promises in writing, because obviously he’s not gonna give some wigtacular chud from Uxbridge a $50,000 watch when he’s got a four year old daughter that could probably use the money more than him. Unfortunately for Pure White Chocolate, he thought the relationship was genuine, and now him and his lawyer wanna cash in on it. Good luck with that.