So this girl Princes Bree from Alabama, the one who took a smiling selfie at Auschwitz, is the story that just refuses to die. And the Princess herself is loving every minutes of it. She’s since blocked access to her Twitter account, but since we followed her immediately after this story came out we still have access to it. Things are definitely heating up. First she was on several shows, including Chelsea Lately, and whatever show this is:

Not gonna lie, I had no idea this girl came from Alabama and spoke like that. This changes everything. If she’s from Alabama then she doesn’t know any better right? I mean, I’m impressed she can even spell Auschwitz. I’m kind of shocked they even learned about it in school. Probably learned about the Holocaust right before they learned about the Civil Rights movement, or as it’s referred to in Alabama as, “Rabble rousers causing trouble.”

The fact that she readily admits that this is is the only part of history she’s ever found interesting basically sums her up in a nutshell. She is everything that is wrong with America. Guaranteed she watches Teen Mom, The Kardashians, and tons of other shows that follow around the worst people on earth. People like her are entertained by that, but learning about the Civil War, or the importance of the Constitution, or the Great Depression, or how the government functions – none of that shit interests her. This is why the terrorists hate us.

Oh yea and that self she took at Auschwitz? That was bullshit. Obviously she went home and touched it up because there is no way the girl in that selfie 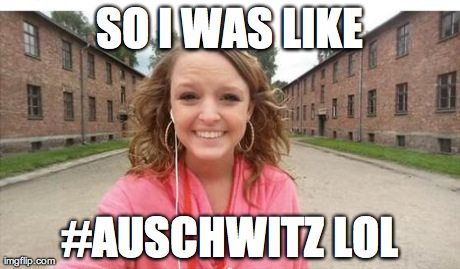 is the same person as this creature here: 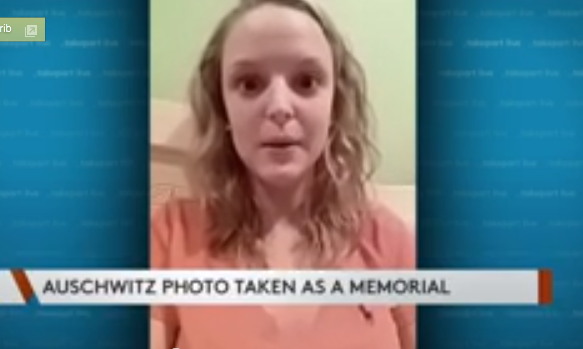 Now I said before I didn’t think it was a big deal what she did. Selfies are the new post cards. The fact that she’s smiling in the photo shouldn’t be a big deal to anyone. I mean, what do you want her to do? Pretend to cry? Get over yourselves people.

With that said some adult down there in Bama should probably tell her to shut the fuck up. She says she doesn’t regret taking the picture and she’d do it again. Newsflash hun – you have a 0.0% chance of ever getting a good job because of that photo. The google machine is going to haunt you for the rest of your life. Ask Margee Pesikov, she can fill you in with the details. The bottom line is that if you don’t regret doing this then you’re a bigger dumbass then I thought you were.

And definitely don’t make a hashtag calling yourself the Auschwitz selfie girl: 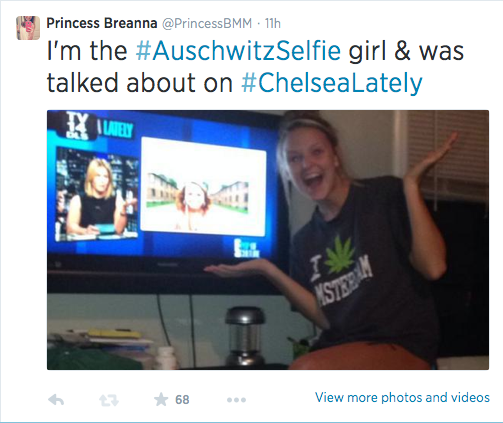 And please, for the love of God stop retweeting every dumbass who tweets their support for you:

She’s jealous of you for being “famous and stuff.” Anyone jealous that your fifteen minutes of fame revolves around your alleged desecration of a Holocaust memorial, is not someone you want to be publicly promoting. 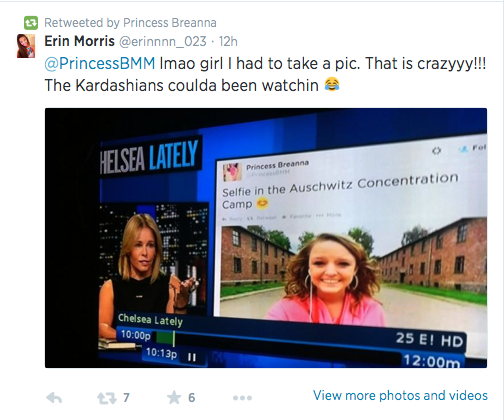 And please, for the love of God don’t retweet this like you did:

Where do I even start? Pressed jews? Does Princess Bree even know what she just retweeted? Hunny, this “Selena Gomez Fan” @thecuntclassic, just wrote one of the most anti-semitic things you could possibly say. She’s telling you not to listen to the the Jews because they’re ugly and anorexic. This person obviously hates Jews and thinks the only people who are mad at you for this are Jews themselves. So she’s backing you up for taking on those “ugly and anorexic pressed jews.” That’s what you just retweeted.

She’s deep in though right now too:

Oh yea, and remember how I predicted that she’d dump her idiot boyfriend who is coming to her defense on Twitter, by Columbus Day? Looks like it happened a little sooner: 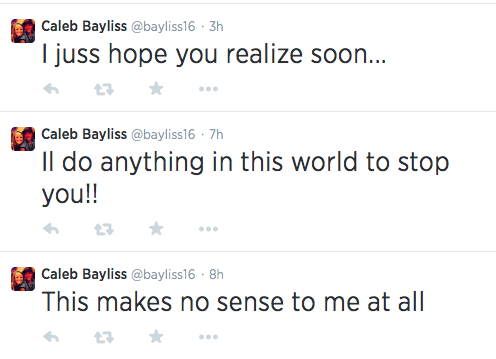