Boston City Councillor Julia Mejia is a well known moron who frequently blames police for most of the violence in Boston. But at a recent City Council meeting she came up with a new bogeyman, and it wasn’t one that anyone saw coming….

Asphalt. The City of Boston is being run by a human being who believes that gang bangers kill each other because the asphalt gets hot, and it turns them into murderers.

“If there’s any opportunity to cool things down during the summer, through uh, some of the efforts, I think it’s asphalt in certain neighborhoods it gets a little bit hotter. And then because so often times there might be some correlation with some of the violence we see in our streets. Just because there’s no real space to cool things off.”

Boston is the birthplace of the American Revolution. It’s produced brilliant leaders like John Hancock and John Adams. Men who wrote the Declaration of Independence and came up with a Constitution that has enabled the United States to become the freest and most prosperous nation that has ever existed.

Now it is the home of elected leaders who think asphalt is killing people.

I guess the simple solution is to turn the entire City of Boston into an outdoor skating rink. Instead of crews filling in potholes with dangerous asphalt we can have zambonis patrolling the streets, making sure they don’t rise above the dangerous 40 degree threshold.

This is of course the same woman who livestreamed herself at a homicide in February, showing her viewers a dead body when it was below freezing.

In the spirit of accountability, I wanted to apologize to those who were exposed to the post I shared last week. My sincere condolences to my neighbors as they grief their loss. I responded as a parent, a neighbor and someone who uses social media to amplify the realities.
Julia pic.twitter.com/1vtjs3QoKL

Turns out it wasn’t the racist police officers who were responsible for all the unsolved murders in Boston, it was the streets themselves. Luckily the streets in the north end made out of brick are homicide free. Eventually Boston may just have to go back to dirt cow paths, because asphalt is straight up killing mofos out here!

I can’t respond and laugh at this woman because apparently she blocked me. 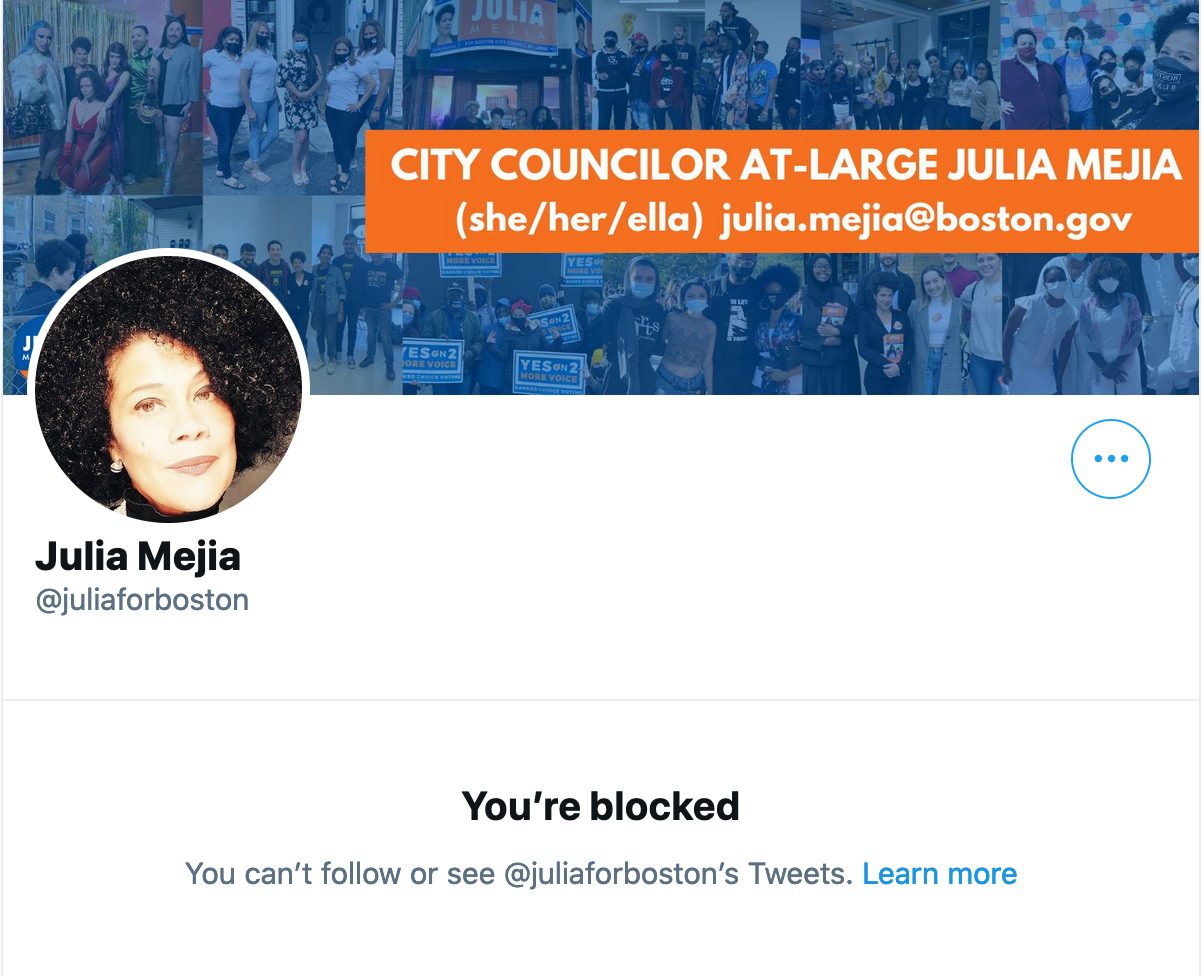 But when you search for “police” on this woman’s account you get hundreds of tweets, and all of them are critical of the cops. You literally can’t find a single tweet from this elected official in which she has something nice to say about the people who investigate murders and arrest murderers. She wants them defunded. She wants to ban a police gang database that makes it easier for cops to identify known gang members because it’s racist to arrest drug dealing killers. She brags about only taking accepting donations from cops who are the right skin color. She wrongly believes that the institution of policing, which exists in literally every country on earth, many of which never had slavery, was started by slave catchers. And she’s condemned the Lowell Police for killing Moses Harris, despite the fact that Moses Harris was a 6 time domestic abuser who attempted to evade arrest after beating up another woman by jumping into the Concord River where he drowned. Oh, and she has great things to say about Monica Cannon-Grant, who has incited more hatred and violence than all the King’s asphalt could ever incite.

This woman won her first election by 1 vote. Let’s hope the citizens of Boston are smart enough to send her packing in November. If not, you get the government you elect. Stupid people represent more stupid people.