Yesterday Worcester City Councilor Michael Gaffney wrote a letter to Turtleboy about his disgust towards Worcester Magazine Editor Walter Bird for the way Bird sexually harasses and tries to hook up with women who he has business dealings with.

But why did Councilor Gaffney wait until now to release this damning information? Well, he was probably mad that Buttmunch Billy Shaner, his newest minimum wage reporter, insinuated in the recent copy of their free newspaper that Councilor Gaffney subscribed to white nationalist ideology: YIKES: Quoting a white supremacist is not the best look, especially after one of them rammed a car into a group of people, killing one and injuring 19. With that in mind, I bring you a recent article in the Worcester Independent Leader by City Councilor At-Large Mike Gaffney blasting city leadership for policies that favor big business and development. While I felt the article did a fine job portraying his perspective, a friend pointed out something worrying toward the bottom. Just before the last sentence, there’s a quote overlaying an image attributed to Voltaire. The quote reads: “To learn who rules over you, simply find out who you are not allowed to criticize.” It is often attributed to Voltaire, although it has been disputed as to whether he, in fact, said it. A prominent and supremely controversial white supremacist named Kevin Alfred Strom did, however.. Among other things, Strom has denied the Holocaust, advocated for a Neo-Nazi party and pleaded guilty to child pornography possession charge. The quote kind of takes a different meaning in proper context, I think. So let me get this straight. Gaffney gives a completely applicable quote about the dangers of censoring free speech, which he and most other people attribute to Voltaire – the philosopher whose writings most historians agree was a driving force in the American Revolution. And what does Billy do? He goes out of his way to turn this into Gaffney quoting a white supremacist. For the record, even the far left attributes this quote to Voltaire: So did people in the aftermath of the Charlie Hebdo murders:

Voltaire: "To learn who rules over you, simply find out who you are not allowed to criticise" #JeSuisCharlie pic.twitter.com/uAK8KF3C6i

So do Palestinians who want to criticize Israel:

To learn who rules over you, simply find out who you are not allowed to criticize.
-Voltaire#GazaUnderAttack pic.twitter.com/k3yt6jzHNH

So did Trump’s lucky sperm:

This is what you get when you Google image that quote: In other words, everyone thinks Voltaire said this. No one knows for sure if he did or didn’t. All we do know is that a random white supremacist from West Virginia also wrote it here 25 years ago. So obviously Councilor Gaffney has been brushing up on his 25 year old West Virginia white supremacist literature. Either that or he, just like many progressives and conservatives before him, believe this is a Voltaire quote.

Anyone with a brain could see what Buttmunch Billy was trying to do here. He doesn’t like Gaffney because he’s a social justice warrior. He tries to play if off like he’s just “reporting the news” but he doesn’t do a very good job hiding it. Keep in mind that the Turtlegram and Gazette called Gaffney a “slave master” two years ago for investigating a fraudulent non-profit that just so happened to be run by a black woman. They act like it’s harmless to throw these labels out there. It’s not. And what I love about Gaffney is that he’s not afraid to fire back at these frauds, which is exactly what he did on his Facebook page last night: Juicy!!! Walter Bird didn’t write the blurb, but his newest employee did. I’m sure Walter appreciates Buttmunch Billy dragging him into a world of shit that is Turtleboy blowback. But what choice did Gaffney have? We’re the only media outlet in town that tells the truth. The rest are clearly against him, so why should he place nice with them any longer? Either way, Walter is the editor. He approved of this. He allowed his newest employee to insinuate that the Vice Chairman of the City Council quotes white supremacists. Yea Mike. He didn’t actually call you a racist. He just insinuated that you are inspired by white supremacist literature and freely quote them in order to push your agenda in Worcester. What’s the harm? YIKES!!

Instead of just apologizing and admitting he fucked up, Buttmunch Billy doubled down and said that he was NOT insinuating any racism on his part: Yea dude, no one believes you. You’re not good at lying. You don’t go out of your way to research a meme’s origins, and then attribute it solely to a white supremacist, unless you’re trying to tie Gaffney to that particular white supremacist. We’re not as stupid as you are.

Yea, there’s no consequences to being tied to a controversial white supremacist just a couple days after one of them murdered a woman with his car. It’s not like Joe Petty and his mindless followers will use that against him. Oh wait….. That’s the story now. That’s how it will be told from this point forward. Buttmunch Billy knew this, which is why he wrote it in the first place. But it’s not his fault: “It’s not on me the way partisans choose to use my reporting.”

See? He was just reporting the facts by going out of his way to suggest that Gaffney quoted a Nazi. Not his fault how people react to that. Kind of like how people like Billy don’t blame Trump when his supporters do fucked up shit.

Many accused him of racebaiting, but Buttmunch Billy once again disagreed:

Yea, totally not race-baiting. White supremacy has nothing do with race.

Then things got even juicier:

Busted!!! Apparently Billy was texting Gaffney wanting to know why a post from one of his trolls named Eric Malouin was deleted: 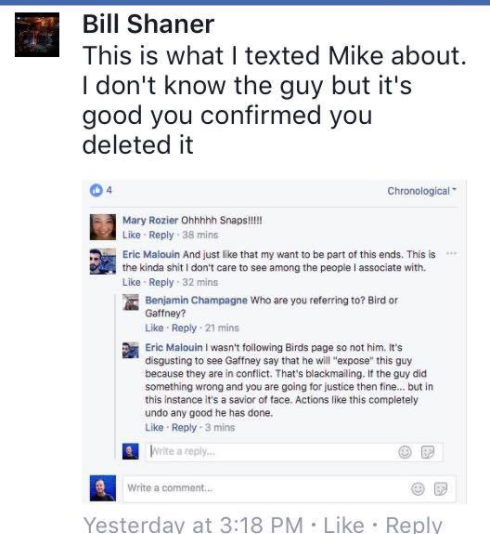 Notice the face he forgot to crop out after he screenshotted: Oh I see now – it was a group effort from Worcester Magazine. No wonder Gaffney wanted to spill the bins on their boss – they conspire to make him look bad and they got caught in the act. Nice going Billy. So that means Lyford was watching this all go down, started screenshotting his boy Eric’s troll comments, and then cried about it to Buttmunch Billy when Gaffney blocked him. Because Josh was too much of a pussy to confront Gaffney himself. Sad.

It looks as if the local African-American community was not impressed with their race baiting: Once Gaffney threatened to spill the bins on Walter’s sexting scandal, Billy realized he fucked up. He’s only been on the job a couple months and his childish vendetta was about to lead to the public humiliation of his boss. So he was all like, “Why not focus on my behavior?” Because Walter allowed this to happen. What you write reflects upon him. When South Shore Turtlegirl offends large groups of people they go after the brand, not the blogger. We all own it together.

It’s OK though, because “Worcesteria” is “irreverent.” Yea, it’s just a joke Mike!! So I called you a white supremacist. Big deal snowflake!! His “friend” thought it was funny:

At least he understands that without doing stuff like this no one would actually read his columns:

I hate to even give Buttmunch Billy attention he so dearly craves. He writes about us EVERY SINGLE WEEK. Or so I’m told, I don’t read it myself. My grandmother calls me about it on her landline. He’s baiting for us to write about him because he’s smart enough to realize that becoming a Turtleboy villain will at least make him somewhat relevant. But now he’s finally got our attention. Unfortunately for him he was completely exposed for being the fraud that he is, and his boss might lose his job.