We have come across yet another legendary GoFundMe trap queen. Her name is Ashely Auger, she’s from Oregon, and she is fantastic!!! Hopefully she won’t be pulled over by a state trooper on her way to her 29th birthday party. Might inconvenience her. But seriously, grown women celebrating their birthdays has to be one of the saddest displays on the Internet. After you turn 21, birthdays are done. It’s just another day closer to death and there’s nothing to celebrate. The people who make a big deal about their birthday are the worst people on earth.

Never mind the fact that this is yet another adult who doesn’t understand what GoFundMe’s are for. GoFundMe’s are not for online panhandling. They are for raising money for legitimate causes that can help people who can’t help themselves. They’re not for grown women who wanna throw themselves a cross country birthday party.

Anyway, it just so happens that Ashley Auger has an extensive criminal background and has been arrested five billion times. Here’s some of her best glamour shots: Holy cow. How are these the same person?

What the fuck is that thing on the right. Good God. Kill it till it’s dead!! But at the same time, if you showed me the picture on the left……….I would. I’ve picked up a lot worse than this at the Blarney Stone: She’s just got so many different looks for her mugshots I can’t help but be impressed. It’s like 50 Shades of Smashley. You’ve got Amber Jennings Smashley: It’s windy outside and I’m having a bad day Smashley: 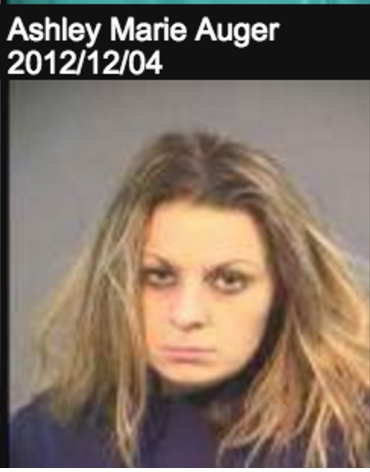 Sweet baby Jesus. This woman just got caught trying to raise money for the greatest all-night crack binge in GoFundMe history. You had to LOL at the only guy who has thrown cash at her: He’s not kidding either. In case you can’t tell from the mugshots, the woman likes her meth. And according to her Facebook page she also is fond of the Tony Yay-yo. You can also tell by her Facebook page that she associates with some real winners: Oh yea, and she’s a mother who got busted with drugs, guns, and cash in a hotel room with her daughter and some guy named Abdul:

Police say two Medford residents had heroin, methamphetamine and marijuana in a hotel room where a 5-year-old had easy access to the drugs and uncapped needles. Ashley Auger, 25, and Abdum Hackim, 29, are charged with unlawful delivery, manufacture and possession of heroin and methamphetamine. Auger also faces additional charges of first-degree forgery, first-degree child neglect and endangering the welfare of a minor, her child. Hackim faces a charge of being a felon in possession of a firearm.

Medford police and the Department of Human Services first responded on Dec. 4 to check the welfare of a child at a hotel in the 700 block of North Riverside Avenue. Auger was in the hotel room, which police said contained drugs, uncapped needles, scales and counterfeit cash. Police obtained a search warrant and seized 7 grams of heroin, 10 grams of meth, 399 grams of marijuana, a 9 mm handgun and $2,278 in cash. Police believed the money to be profits from drug trafficking. Investigators said the drugs were within reach for Auger’s 5-year-old child.

All-Star parenting right there. Don’t worry though, because according to her daughter was ballin with stacks of cash:

No idea who she’s talking to there, or if Dad, Josh, and the ex-boyfriend are the same person. But thank God this woman was able to reproduce. God bless America. Don’t worry, she’s a great Mom because the gun that was within reaching distance of her five year old daughter was registered. Even ask her: This incident happened in 2012. According to her Facebook page in 2015, she somehow had custody of her child: So yea, if you were planning on giving money to this woman, we’d recommend you just burn the money instead. The only people who are more unreliable than her with money are the crooks who operated out of 41 Piedmont Street.