Just Like We Called It: The Homeless Guy In The Gas GoFundMe Scam Was In On It, And If You Donated To Them Like An Idiot You Deserve To Lose Your Money Fox News: A New Jersey couple and a homeless Philadelphia man who were once the symbol of generosity in hard times allegedly conspired with each other to come up with a false story to earn GoFundMe donations and will now face charges, according to a complaint obtained by NBC 10 Philadelphia. The original story was this: Johnny Bobbitt, who was homeless, gave his last $20 to Kate McClure, a stranded motorist in Philadelphia in November last year, to help her get gas. To thank him, McClure, 28, and her boyfriend, Mark D’Amico, 39, created a GoFundMe account to raise funds for Bobbitt. Around 14,000 people donated to the campaign, which brought in more than $400,000 overall.

But investigators said the three deliberately prevented donors from gaining information “that would affect their judgment about solicited contribution to that fundraising effort,” according to the station. Now they will face charges including conspiracy and theft by deception, a source familiar with the case told NBC 10. The couple turned themselves in on Wednesday to Burlington County authorities, the source said. It was unlcear if Bobbitt was with them. The Burlington County Prosecutor’s office is expected to make an announcement in the case on Thursday, The New York Post reported, citing multiple reports.

The story appeared to begin to fall apart after Bobbitt claimed that the couple used the GoFundMe money as “personal piggy bank,” and sued the couple in August over the funds. Bobbitt’s attorney, Jacqueline Promislo, told The New York Post in September that the couple started to spend the money right after depositing it into their bank account. Bobbitt accused the two of mismanaging the donations, which the couple initially denied.

“They went on shopping sprees,” Promislo told the paper. “[Bobbitt] tells me they had a Louis Vuitton bag and Chanel sunglasses, a new iPhone 10.”

But the couple claimed they withheld the money to help Bobbitt. They said once the money came in, Bobbitt began to give some to relatives and spend it on drugs. He ultimately received roughly $75,000 from the GoFundMe, which he used to purchase a camper and SUV — both of which he no longer has, reports said. D’Amico claimed in August that he controls the funds and that he would dispense the money when Bobbitt gets a job and stops using drugs. Police had raided the couple’s New Jersey home in September, confiscating a new BMW, jewelry and cash, NBC 10 reported. I’m gonna give you a quote from August 27, 2018 and you tell me who published these words:

Here’s what probably happened. They were all in on this together. Obviously Mark D’Amico is a swamp maggot with Google trophies up the wazoo. They told this homeless guy, “Let’s say you gave us your last $20 when we ran out of gas, everyone will feel bad for you, and we’ll all cash in on the GoFundMe together.”

And it worked out better than any of them could’ve imagined.

The problem arose when reality sent in. Bootleg Kevin Federline and realized that the guy they partnered was indeed a junkbox who wanted to have a $400,000 crack giveaway party. The plan was to split the cash, but he felt bad since he’d just be feeding this guy’s habit. So instead of buying him a house they bought him a camper which they put on their property, and that turned into a nightmare because he sat in it all day, got high, and made sweet, sweet love to himself.

Finally the homeless dude said, “Fuck it, I’m going to give handies under the bridge for crack money since these chiselers aren’t giving me what they promised.” And here we are.

That would be Turtleboy folks. 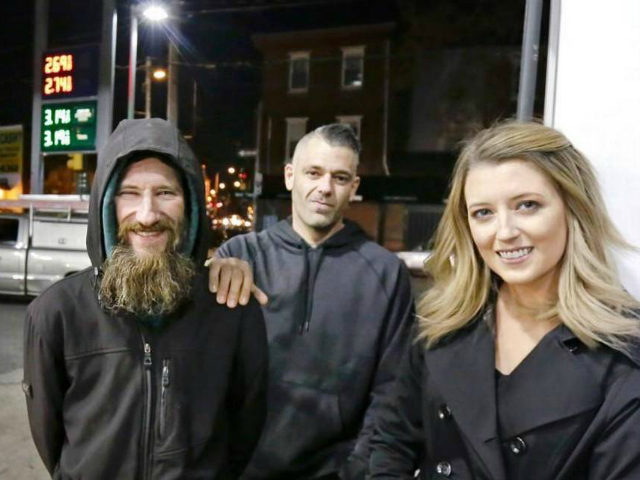 This is why you come to Turtleboy. Because our instincts are impeccable, and we are the only media outlet that isn’t afraid to make a bold but obvious prediction that goes against the acceptable norms civilized society has arbitrarily created. All these sheep were blaming D’Amico and McClure for ripping off a poor homeless veteran and treating Bobbitt like he was some sort of victim. Not one of these lemmings bothered to ask themselves these questions:

Why does a homeless guy have $20 on him?

What kind of homeless guy gives that money to two strangers for gas money instead of on food, alcohol, or the new testers from Diego?

If they ran out of gas then they only needed half a gallon of gas to get to the gas station, so why did he spend $20 on gas?

How did he transport $20 worth of gas from the gas station to the car? That’s at least 5 gallons of gas, and would be extremely heavy.

Why did he have a 5 gallon gas can in the first place?

Why was a homeless guy randomly sitting right there on a highway when they ran out of gas?

Use your brain folks. It’s OK to question things to seem too good to be true. People will call you mean and say things like, “What is wrong with you?” But at the end of the day you’re right and they’re wrong, and the truth is the only thing that matters. The biggest mistake bootleg George Clooney and his wife made was partnering with a junkie. It could’ve worked out if they had just given him $100,000 and let him spend it on whatever he wanted. But instead they actually cared about what happened to him and didn’t want to contribute to his drug habits. When you do that to a junkie they get mad. That’s why bootleg George Clooney wrote him this text message after Junkbox Johnny started opening his big mouth: You should’ve done that to begin with idiot. Write him a check and walk away. If he dies, he dies. Not your problem.

I have two points to make here.

This is why you come to Turtleboy. Because our takes are hot and bold, we’re not afraid to take a controversial position, we’re almost always right, and we report real news years before the mainstream media does.