On Friday we told you hours before the “real news” media that Massachusetts State Police Colonel Richard McKeon would be resigning that day. We also said that at least one of his immediate subordinates would also be resigning. 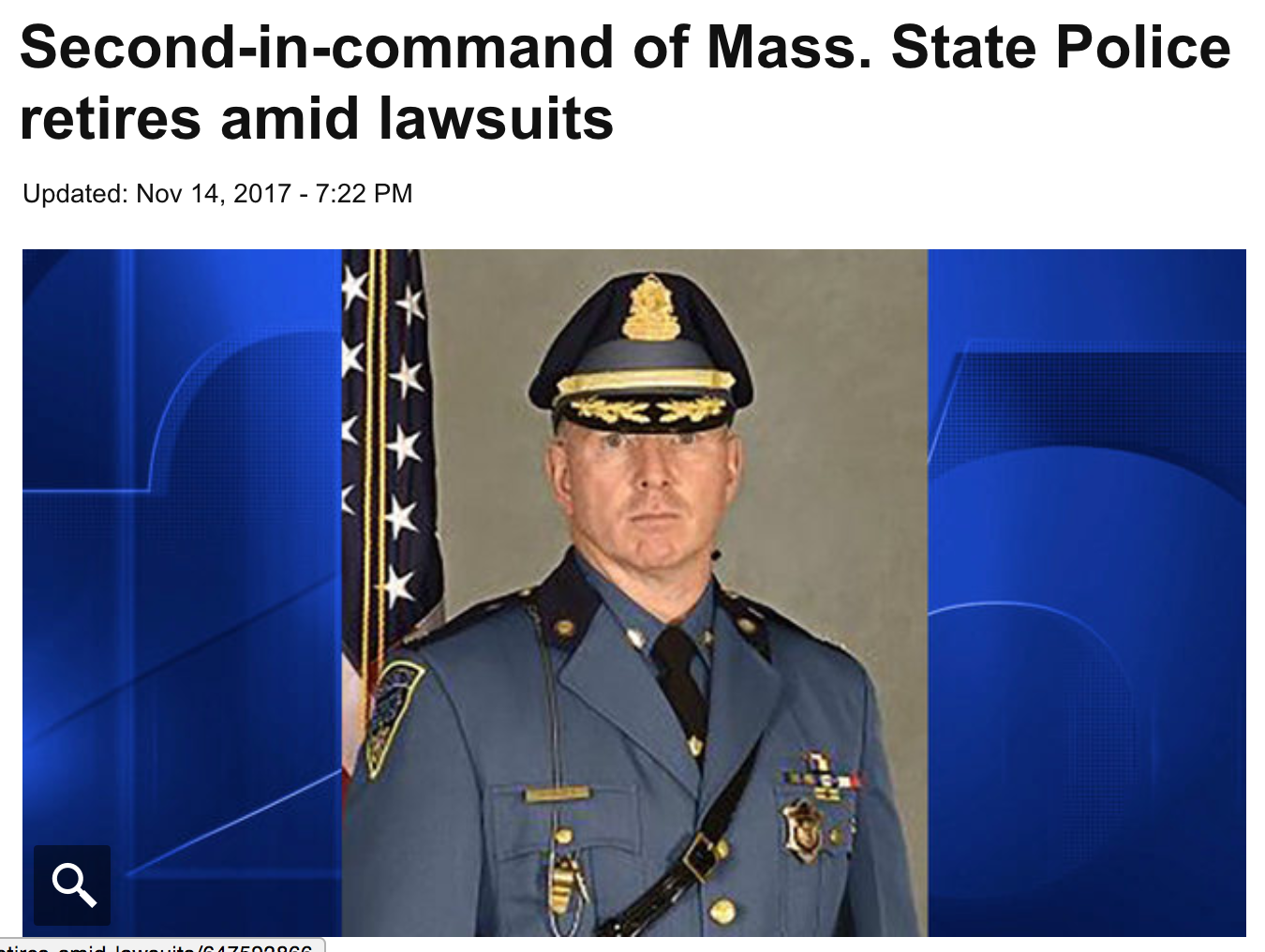 Fox 25 News has confirmed that the deputy superintendent of the Massachusetts State Police has retired amid lawsuits regarding changes made to police reports. Lt. Col. Francis Hughes’ retirement was announced days after the retirement of Col. Richard McKeon was announced. Troopers Ali Rei and Ryan Sceviour both allege they were forced to make changes to reports after the October DUI arrest of Allie Bibaud, the daughter of a Dudley District Court Judge. Originally state police said the changes were in line with protocol because the initial reports contained unnecessary, graphic comments that were not relevant to the arrest.

Good riddance. He had to go too. He knew about the coverup and did nothing to stop it. The most amazing part about this story is the fact that two low ranking, young troopers were the ones who had the balls to stand up to this system of corruption. Meanwhile these asshats making twice as much money, who had nothing to lose because they can retire on fat pensions, allowed it to continue so they could keep climbing the ladder. Pathetic.

There clearly is a culture at the top of the food chain where the deputy ops were in bed with politicians and other suits, and only had their jobs because they were loyal soldiers. I know this because I watched all five seasons of The Wire a billion times. It happens in real life. I’m sure both Lt. Colonel Francis Hughes and Colonel McKeon were good police at one point. But when you’re a climber you often forget where you came from, and that’s clearly what happened here.

What the MSP need to do is get fresh blood at the top and let the Joe Early’s and Tim Bibaud’s of the world know that this isn’t how things are gonna work anymore. And you can’t do that by letting members of the former regime hang around.

But once again Dan Bennett, Joe Early, and Tim Bibaud walk away from this with no consequences because Governor Baker doesn’t feel like going after the root cause of the problem.

Unfortunately for them, attorney Lenny Kesten, who has vocally supported Turtleboy countless times on the Howie Carr show last week, is a shark in the courtroom. He carries a vicious reputation and has vowed to get to the bottom of this.

And his two clients have had their reputations forever tarnished by this. When people Google their names now this scandal will be the first thing that comes up. What happens if the 32 and 29 year old troopers want to get a new job working for the FBI? Trooper Rei in particular will have many doors open for her because of both her gender and more importantly her expertise in drug recognition. Let’s say a gig opens up in Washington DC doing work for the DEA. The first thing they’ll do with her resume is Google her, look at the headline, and move on to the next resume. This wasn’t harmless. It potentially ruined their careers.

You best believe Bibaud, Early, and Bennett’s phone records are gonna be handed over to him, and he’s gonna see exactly who spoke to who in the days after Alli Bibaud famously posed the question that remains unanswered – how many guys did she have to blow to get that heroin?