Leigha Genduso Is No Longer A Danvers Bartender After Sean Bucci’s People Start Brawl There, US Attorney’s Office Withheld Critical Information From Bucci’s Defense In Possible Deal With Genduso For MSP Background Search Last week we published this blog about disgraced former drug dealer turned State Trooper Leigha Genduso, after new information about Genduso’s background was released. But we need to look at the timeline again. Leigha began applying to become a dispatcher in 2006. This was just a year after she committed perjury by lying about laundering money that belonged to her and her ex-boyfriend Sean Bucci in front of the grand jury. Remember in this blog we saw that Leigha spoke openly about applying to become a MSP dispatcher on Masscops.com: This is insane when you think about it. She was looking at jail time because she had just violated her deal with the US Attorney’s office for immunity if she told the truth in front of the grand jury in 2005.

Then a year AFTER she applied to become a dispatcher she remarkably got a second chance to tell the truth and testified at Sean Bucci’s trial, where she admitted to money laundering, tax evasion, perjury, and drug dealing. Obviously then we can assume that the US Attorney’s office was also complicit, as no one would ever get a second chance like this.

Keep in mind, she was also being investigated by amongst others, the MSP, when she applied to work for the MSP. The MSP confirmed that Genduso’s background check into her application to become a dispatcher was conducted by Trooper Kurt Ferrazini, who just so happens to live in North Reading, the SAME TOWN where Genduso and Bucci were busted selling pot.

Did Ferrazini know her and overlook the fact that she had just testified to some very serious crimes the year prior because he knew her? North Reading is a small town after all. Or is that just a coincidence and Colonel Marian McGovern, a good friend of Leigha’s, called in a favor? If the MSP were actually taking this seriously they would thoroughly investigating Trooper Ferrazini and finding out exactly what happened. But instead they’re going after overtime abusers as a way to distract people away from this much, much more serious issue.

Here’s another thing – when she testified against Bucci, she never mentioned that she was interviewing and applying to become a MSP dispatcher. This is a HUGE non-disclosure of exculpatory evidence by the US Attorney’s office, and Peter Leavitt. Keep in mind, Peter Leavitt allowed this woman to lie to the grand jury, after offering her a deal to be immune from prosecution if she agreed to testify truthfully. So he not only allowed her to violate that deal and avoid prosecution, he also withheld critical evidence from the defense

This would’ve been extremely influential towards her credibility. Surely a woman who wants to become a MSP dispatcher, and who has shown a willingness to lie under oath, would say just about anything the US Attorney told her to after she already perjured herself once. Leavitt had her by the balls. He could easily have coached her to say whatever would help him get a conviction, and then promised that he would help her become a dispatcher.

I’m not a lawyer, but this seems like grounds to overturn his conviction, and a serious ethical violation on Leavitt’s part. This would result in a huge cash payment to Bucci as well. All his defense has to do is provide proof that the government knew she was applying to become a dispatcher (which they can easily find, and she admits to) when she testified. The fact that this information was withheld is startling and reeks of corruption. What was Leavitt’s relationship with Genduso? Why isn’t this being investigated? We called to speak with Mr. Leavitt today and told him it was about Leigha Genduso. He told us he would gladly answer our questions but that he had a conference call and to call him back at 11 AM. We did and he was not there. Nothing shady about that!!

Update: Peter Leavitt contacted us shortly after this blog but would not comment on anything to do with the Genduso case.

Anyway, we broke the news last week that Genduso is now bartending at some spoke in Danvers called The Osborne Tavern. 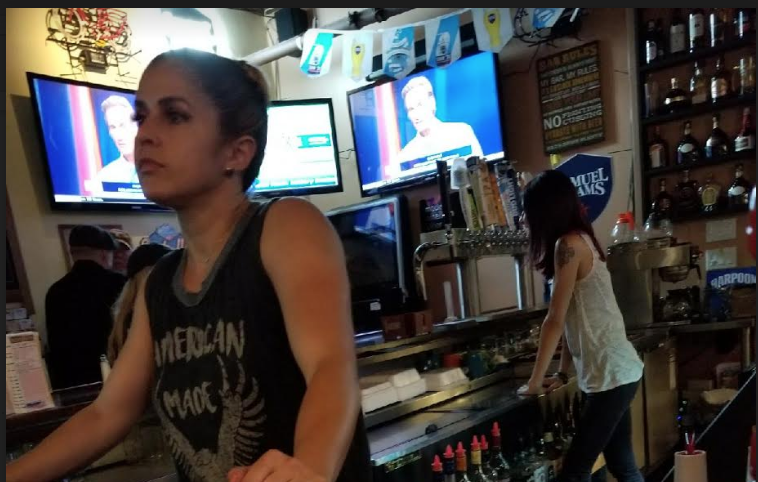 Well, Howie Carr announced this about her current employment status on Twitter yesterday….

I've got calls into @DanversPolice and @MassStatePolice. Injured Manager is dispatcher (as was Leigha before her promotion to Trooper). More details at 3pm.

LOL. This story just never ends. We know Bucci’s people read Turtleboy. And he just so happens to be from Danvers. There’s no doubt in my mind they went down there because of the blog. But can you blame them? This woman committed perjury to save her own ass, and then made a deal with a corrupt US Attorney to not only stay out of jail, but to get a plum job as a MSP dispatcher, and eventually a K-9 trooper. Howie is extremely reputable and did his homework. The fact that this bar is managed by another dispatcher is troubling too. Why is a current MSP dispatcher associating with her? Why is the MSP not cleansing itself of this woman? Sure, she has a right to become a bartender, which she should’ve been all along, but she couldn’t find a job at a bar that isn’t managed by a dispatcher?

We’ve also been told by reliable sources that they were trying to work out a deal for her, since she has not been fired yet. The rumor is that she will get to claim disability and keep her pension. If that happens, we riot. I will freak the fuck out if this chick gets a huge cash settlement after all the lies and bullshit. It will forever tarnish the legitimacy of the MSP. We will see what comes next.