Deadspin: Pirates outfielder Andrew McCutchen took a pitch to his back in Saturday night’s game against the Diamondbacks. On a 2-0 count, Arizona reliever Randall Delgado plunked McCutchen. It looked painful, but McCutchen wasn’t seriously injured. McCutchen was visibly furious, not at the beaning, but because of how it was executed.

McCutchen took a pitch to his back because in the ninth inning of Friday night’s game, Pirates reliever Ernesto Frieri caught Paul Goldschmidt in the hand, putting the D-Backs first baseman on the DL with a broken hand. After that game, the Diamondbacks dugout and Pirates catcher Russell Martin exchanged some words, though it didn’t appear that Frieri tried to hit Goldschmidt in the bottom of the ninth in a game that Pittsburgh was winning. Either way, Arizona wanted revenge, and since McCutchen would be seen as the equivalent star player, he knew what was coming. But he didn’t expect the Diamondbacks to wait until the end of the game.

“They had all game to retaliate. I can deal with being hit by a pitch. That’s the game. It happens,” McCutchen said. “Retaliation is going to happen in this game, but there is a right way to do it. They had plenty of chances.

“First inning, do it. Perfect time: one out, guy on second base. Get it over with. But they wanted to wait it out, wait until the ninth, second and third.”

“After a slider away. They’re setting me up that inning — and it was really not appreciated. Are they hoping I check my swing and it hits my hand, and I get hurt, too? If you’re going to hit me, hit me. If you’re going to miss me with the first pitch, hit me with the second pitch … try to hit me. But you don’t throw a slider on the next pitch, and wait for the third pitch. Because that’s how people get hurt.

“It hit me square in the spine. If I get hurt, what happens then?”

Is there any group of people in any profession that is filled with a bigger bunch of whining naniburgers than MLB pitchers? Because I’d love to find a group of people whose heads are shoved any further up their own asses than a MLB pitcher.

At least these pitchers are National League pitchers and they actually have to bat themselves. Because it takes a real macho man to get up on the mound and fire a blunt object 95 mph directly at another human being, knowing full well they will NEVER have to face the same sort of retaliation themselves. I mean, what fucking century is this? How are we all just cool with the fact that a guy has to stand in a defenseless position with no pads on and take a solid, cylinder object to the body simply because another guy accidentally got hit by that same object yesterday? Why don’t we just bust out the guillotine and the public floggings while we’re at it?

This is just more idiots policing baseball’s long list of unwritten rules that never existed. It’s really shocking why people don’t watch this boring ass sport anymore. Because, who doesn’t wanna watch a game where no one’s on steroids anymore, an exciting inning involves a hit and run, and surly dooshnozzles with a stick up their ass go around beaning the best player on the other team merely because they are guilty of being the best player on the other team?

Does it suck that Paul Goldschmidt is going on the DL because he accidentally got hit by a pitch? Sure does. But he’s not Helen of fucking Troy. We don’t have to start a war every time a star player gets a boo-boo. Plus, he got hit by an 85 mph pitch that got away. It’s not exactly the same thing drilling McCutchen with a 95 mph fastball in the back, on the third pitch of an at bat when he assumed the beaning was coming in the first inning.

I can’t believe McCutchen is being such a good sport about this. Like, he went into this game knowing full well he was going to have a guy throw a baseball at him from close range at full speed. And he was just COOL with that? Because it’s just part of the game? Where the fuck do these people learn this propaganda? Aren’t there any players out there that wanna take a stand and say, this is fucking retarded? Why don’t we just give them horses and jousting spears and let them go at it. Seems a lot safer and BOTH guys have a fair chance to lay a blow.

Like, I’ve known that MLB players take these unwritten rules seriously, but I had no idea how complicated they were. So if Goldschmidt gets hit, the only person on the Pirates eligible for a beaning is McCutchen because he’s good too? If I’m McCutchen I’m like, “whoa, whoa, whoa!! I didn’t hit you, why the fuck do I have to take the beaning? I’m just here to make my money and nail every prim looking star gazer in Pittsburgh.” 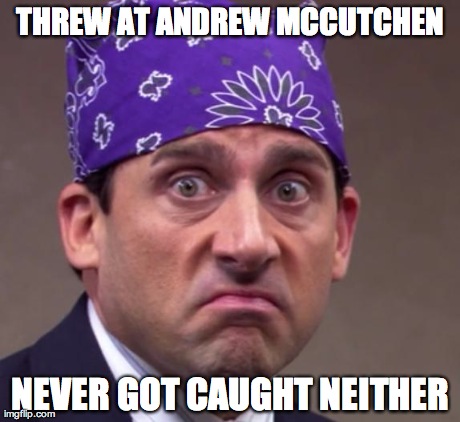 And at what age are these unwritten rules taught? Because I played baseball up through Little League (stopped there on account of I sucked, so my Mom signed me up to play the sport for kids who suck at baseball – soccer), and I can’t ever remember being taught the rules about beaning players.

So like, if you hit the worst player on the team, does the other team have to respond in a reciprocal manner? Because if I’m the sucky kid on the team, and my sucky counterpart gets nailed, I hate baseball even more than I already did going into that game. I mean, it’s bad enough that your Dad tells his all his friends that you’re gonna join the theater club. But now when you suck you have to go to a game knowing you’re gonna get drilled too? All because the other sucky kid got drilled? Yea that makes tons of sense.

Oh yea, and did I mention that the D-backs suck? This is another reason baseball is dumb. Why the fuck do the D-backs have so much pride? What in tarnation do they have to be proud of? No one goes to your games. The Dodgers pee in your stupid outfield pool every year.You’re all awful at your jobs and you’re just riding out the season and collecting checks. But THIS is the one part of the job you take seriously? No one’s even watching these games. No one cares if you retaliate. Get over yourselves dooshnozzles. 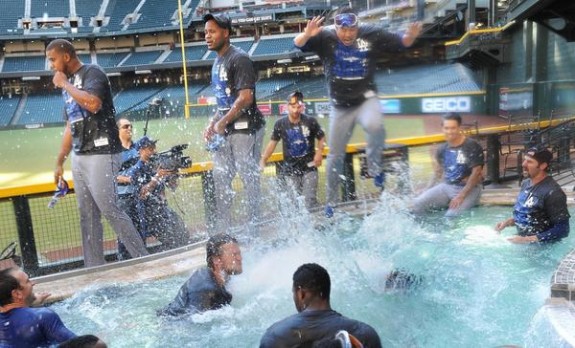 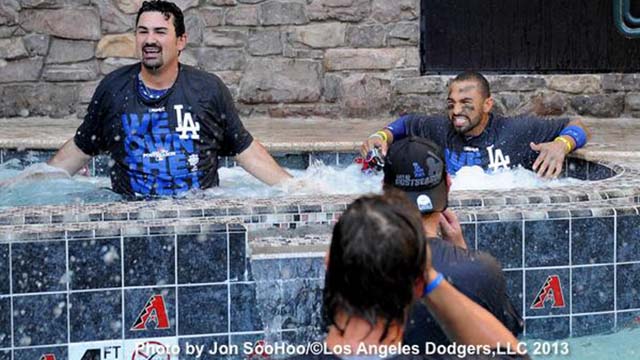 I’ll tell you one thing though. All these mother fuckers better thank their lucky stars Jonny Gomes wasn’t there or they’d all be getting the sweet taste of American justice.

P.S. I remember the good ol days when this time of year the Red Sox were fleecing the Pirates for their latest McCutchen that they would inevitably lose to a big money team like Boston. Now we’re selling away guys we don’t wanna pay like hot cakes. The times they are a changin’.