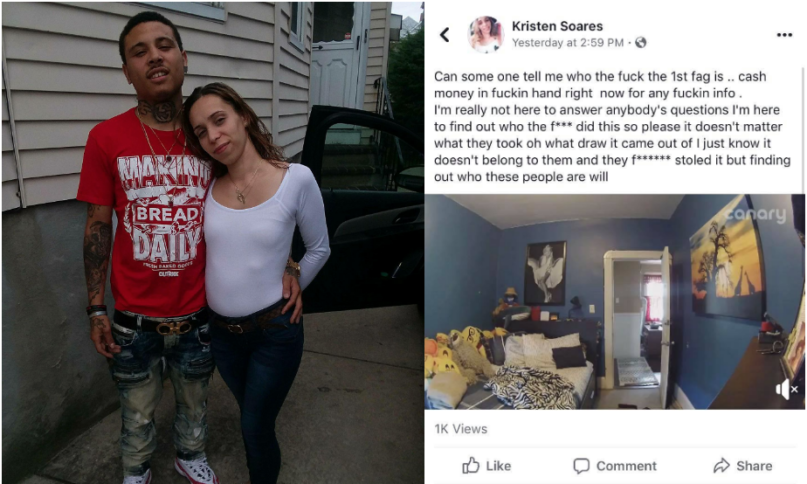 This is Kristen Soares of New Bedford. 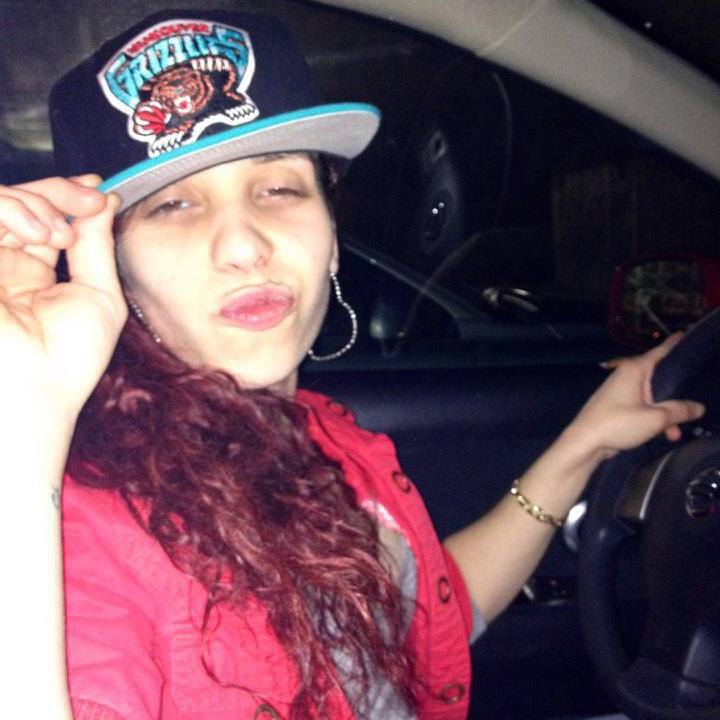 As you can see she’s into bathroom selfies, dog filters, flat brimmed hats, and reproducing with men who wear decorative gold belt buckles, flash gang signs, and wear shirts that say, “Making bread daily,” which totally is NOT a reference to drug dealing.

She has no tolerance for bitches won don’t put in the work.

And she enjoys dressing up her crotch fruits in wife beaters and handing them stacked of $20 bills so they can get a head start on following in the foot steps of whoever pulled the pump and dump in her. 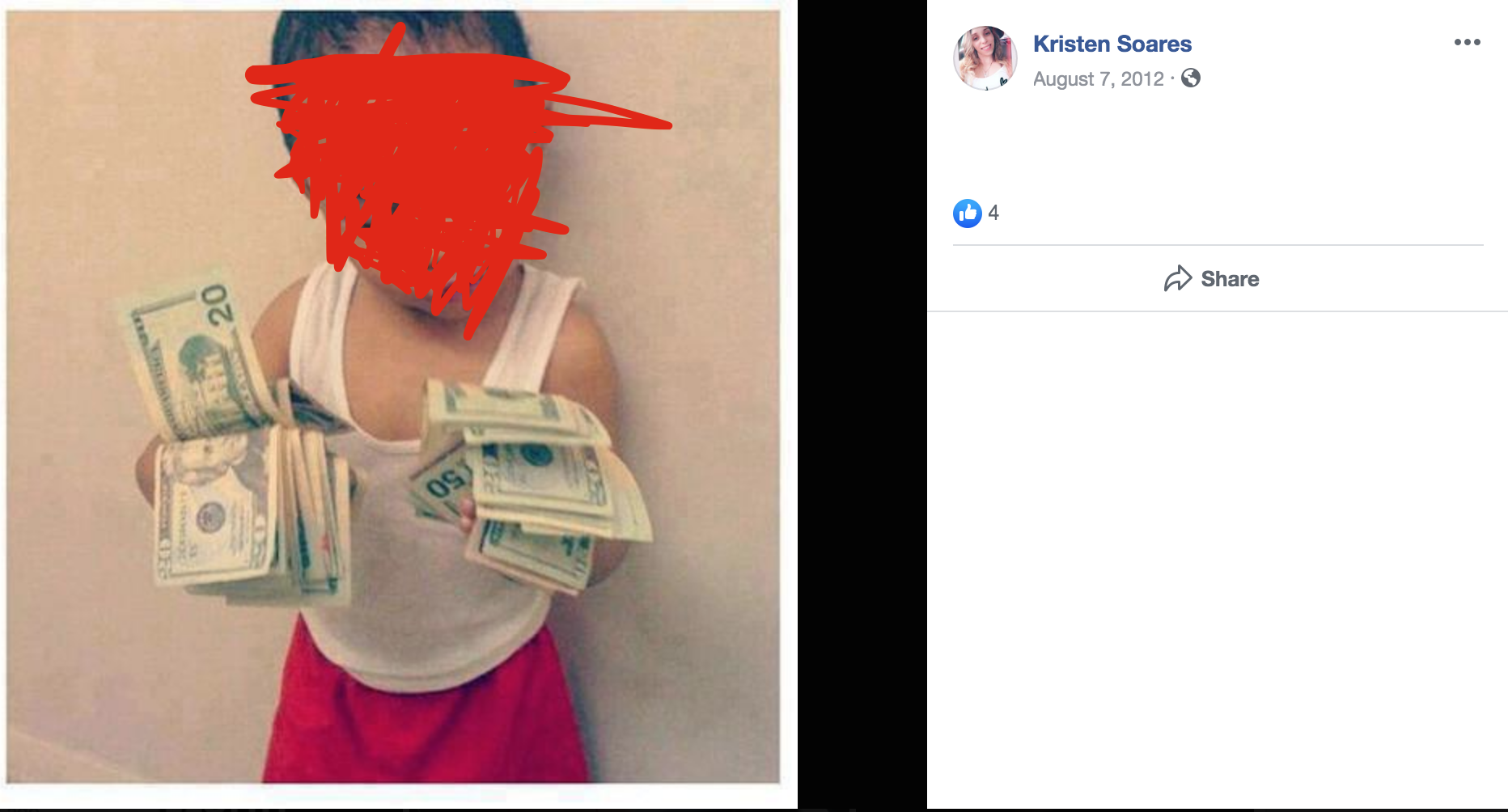 Oh, and she’s a CNA who likes the Chicago Bulls, Hennessy lodged in a fat ass, and posting about how she likes to give head for the world to see on Facebook. So obviously this is an upstanding citizen who can certainly be trusted to tell the truth.

Yesterday she posted a video of her house getting robbed and asked for the public’s help identifying the perpetrator, but it came with a caveat. “It doesn’t matter what they took…I just know it doesn’t belong to them and they f****** stoled it.”

Girl, the only thing that got stoled from you was an edumacation.

Here’s the thing though Snatch Donkey, it kind of does matter what they stoled. Especially since this plastic baggie looks like it may or may not contain something of value to them. Gee whiz, I wonder what that could be?

Notice they knew EXACTLY where to look, and knew exactly what they were looking for. They were in and out in 15 seconds. And instead of going to the police she’s going to Facebook, because she knows damn well the cops are gonna know EXACTLY what happened here.

But according to her and her PR skankatron Amanda, there were no drugs stoled, just some cash and panties which for some reason she keeps in a bag that they also stoled. Nothing to see here.

Then there’s also the fact that this particular room has a camera in it, which I’d definitely put in my room if it contained cocaine and cash. Then again, you’ll also notice there’s a sex swing hanging on the door. So the camera could be used for other purposes.

And did I mention the hoodbooger who treats her stench trench like a discount package of rice-a-roni just so happens to be a drug dealer with Google trophies for breaking and entering, burglary, and assault and battery?

WBSM: A New Bedford man has been arrested and faces multiple charges for breaking into a home Sunday night, assaulting and then occupant and preventing him from calling police. New Bedford Police say 24-year-old Orrin Guidry broke into the a 968 Rockdale Avenue residence, damaging the window in the process. Police report that the occupant of the home is known by Guidry. While inside, Guidry then assaulted the occupant and prevented emergency calls the police.  Arrest reports indicate that emergency calls from the residence came into New Bedford Police at approximately 3:54 a.m. The exact timing of Guidry’s break-in is unknown. Guidry was arrested and charged with unarmed burglary, malicious destruction of property, witness intimidation, disturbing the peace and assault and battery. 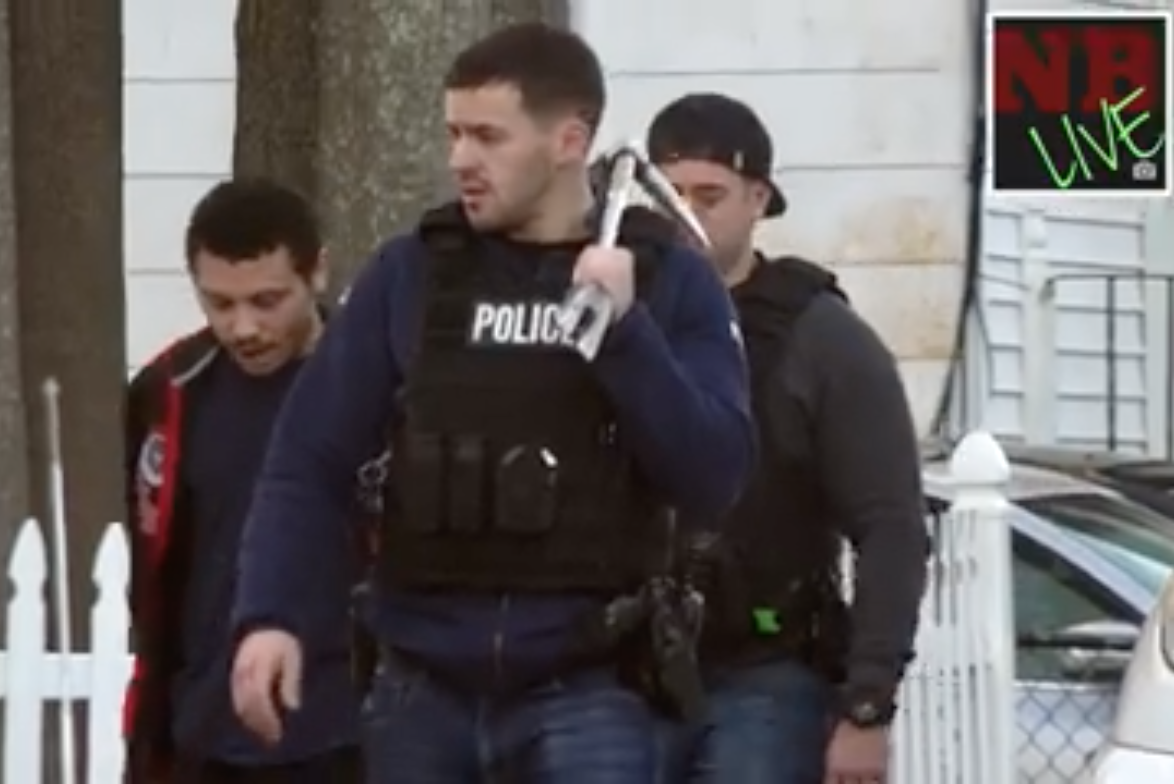 Why would anyone possibly think this robbery was drug related? He seems like such an upstanding individual. So yea, if you recognize the guys from that video please let us know so we can help Ms. Boner Garage get her stash back. I mean, panties.