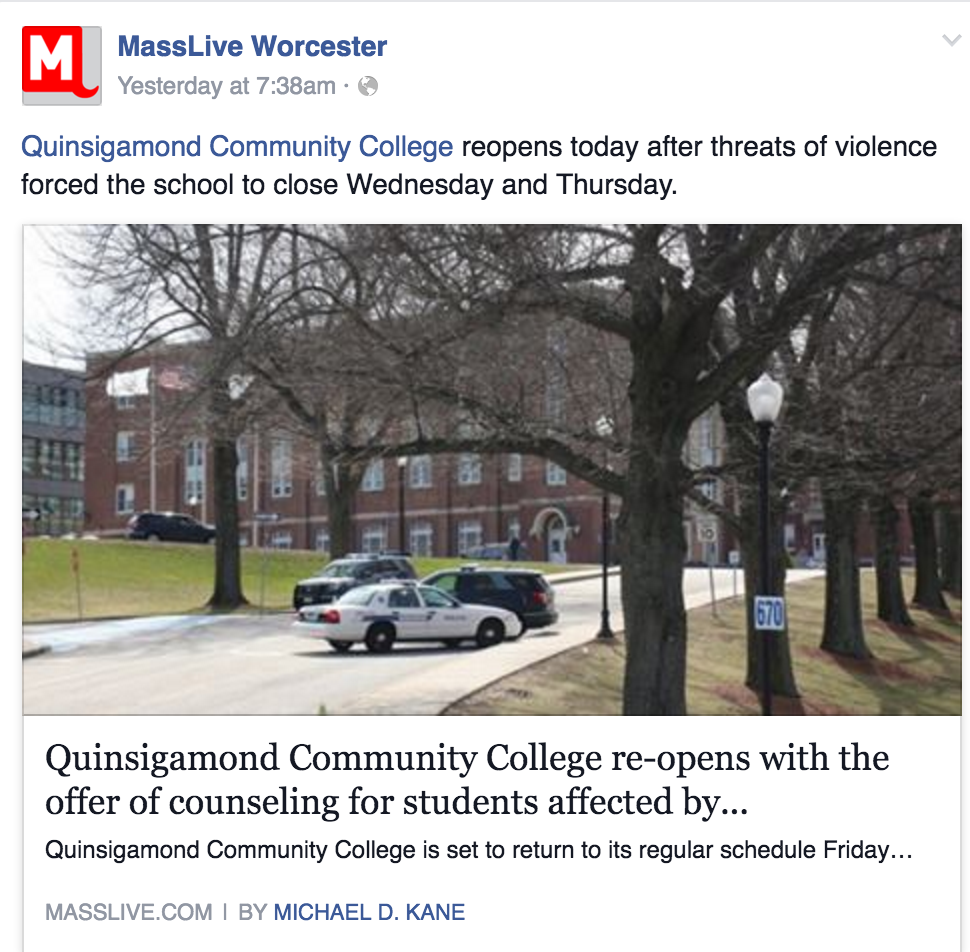 So there were a couple bomb and shooting threats at Quinsigamond Community College this week which we weren’t gonna bother blogging about until we saw this on Masslive:

Quinsigamond Community College is set to return to its regular schedule Friday morning, with the addition of “critical incident sessions” for students who feel the need to further discuss the threats of violence that closed the campus Wednesday and Thursday.

An email sent Thursday afternoon by Quinsigamond Police Chief Kevin Ritacco invites students to discuss the events of the past few days during three individual drop-in sessions scheduled for Friday. Those sessions include “professional counselors from an external agency, as well as experts in stress, psychological, and emotional management,” the email states.

“You will have the opportunity to hear the facts of the recent events, learn tactics on how to work through your emotions, and be given resources for additional emotional support and follow up,” the email states.

The problems started for the college Wednesday afternoon around 3:30 when campus police were informed of a bomb and/or shooting threat to the main campus at 670 West Boylston St. The campus was evacuated and then searched by state, Worcester and Quinsigamond police, including K-9 units; nothing was found.

On Thursday, March 31, at approximately 8:30 a.m. the college received a threat of a shooting, again directed toward the main campus, according to Carberry’s email. Daytime classes were canceled and the campus was once again cleared and shut down by 8:45 a.m. Around 10 a.m., all of the schools satellite campuses were closed and at 2 p.m., nighttime classes were canceled.

Thank God Quinsig is providing counseling for these poor damaged adult children. It’s a miracle they survived their free day off from classes and got to stay home, spoke pot, and read about Turtleboy Sports trip to Lawrence.

I just don’t get it. I mean, this is the terrorist generation. These kids are growing up with school shootings, marathon bombings, and 9/11. Shouldn’t they be naturally more hardened than everyone else? Why do they continue to need so much coddling? How far are we gonna go with this thing? Because literally NO ONE was hurt by this. Here’s the email they sent out to students: “We understand this might be traumatic?” TRAUMATIC!!!???? This is the word we are using for a a fake bomb threat that was made so someone could get out of a test?? This is traumatizing for these poor babies??

This reminds me of all these losers whining about the Boston Marathon movie that Mark Wahlberg is making. Remember these idiots?

Guess what all these people have in common? None of them was actually at the Boston Marathon when it blew up. But yet they’re all acting like they were somehow victimized by it. Because being a victim is so hot in 2016.

Ya know what, I don’t even blame this generation of college students. It’s not their fault, it’s the fault of people who are feeding into this nonsense. The administrators and professors who are providing safe spaces, and offering counseling sessions for hurt feelings and “trauma.” If there are a few kids out there who actually believe this is a traumatic event, it’s about to adults to look at them and say, “calm your tits junior.”
Stop being such a va-jay-jay and get your ass to class.” Failure to do so means you aren’t doing your job.

More importantly, we need to stop taking bomb threats and school shooting threats seriously. I know we’re probably gonna get shit for this, but it’s becoming an epidemic. High schools and colleges all over this state are shutting down like hot cakes because some idiot emailed a bomb threat or called in on a blocked number and said they were gonna shoot up the place.

Newsflash – if someone wants to blow up a building they’re gonna blow up the building. If someone wants to shoot up a campus, they’re gonna shoot up a campus. What they’re not gonna do is give everyone advanced warning so that there’s no one there to kill when the mayhem starts. Can anyone please point me to the crazed gunman that gave everyone 12 hours notice? Columbine, Virginia Tech, San Bernadino, Sandy Hook. Those all happened without warning. Because the people who perpetrated them were evil and wanted to kill people. They didn’t give anyone a heads up first.