Out of all the panhandlers in this country, Worcester panhandlers have got to be leading the nation in the least amount of fucks given. A turtle rider sent us this gem today, of two panhandlers rolling doobies in the middle of an island on Park Avenue:

It’s OK though, because they weren’t on the clock. They were taking their first 15 minute break. Even panhandlers have to abide by labor laws. Also, 99% sure that the panhandler doing the rolling in the blue tank top is the same guy who is threatening liberals with voting for Trump if they don’t give him cash: He’s also the same guy who two weeks ago was holding this sign: 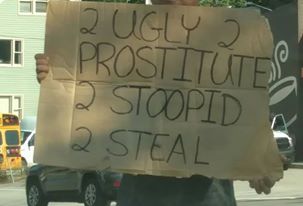 He’s even at the same corner there. Notice all the businesses surrounding him that he’s not applying for jobs at. All those job creators pay taxes to the city and rent to the landlord, who then pays property taxes to the city. It’s a struggle to make ends meet but at least they’re actually providing a service that people want. This twatwaffle is just making cliche, unoriginal signs that he thinks are funny so he can buy dime bags of shwagg.

So basically, this guy makes money by setting up an unregistered business on public property. That’s the way the city has to approach this problem. Stop treating them like panhandlers. They’re illegal gypsy business owners. Treat them the same way you would any other tax-dodging entity. 100% of their revenue goes directly into their pockets, they provide no service in return, and they threaten to elect Trump if you don’t do as they demand. Tracy Novick and the ACLU will argue that panhandling is free speech, so you just call it what it is – an illegal business. That’s how you beat Tracy Novick.

Anyway, fuck this guy. Turtleboy’s big beef with him is that he’s clearly not a heroin addict. He’s just panhandling for weed money. In the hood we call this a “scavenger.” They’re the lowest of the low. If you wanna smoke weed, then more power to you. But buy your own shit and toss in on the L once in a while.