Washington & Lee University President Ken Ruscio promised Wednesday to meet with a group of students who demanded the school remove all confederate flags from campus and begin to cancel classes for undergraduates on Martin Luther King, Jr. Day.

The president was responding to demands issued by a group of 12 W&L Law students, collectively known as The Committee, that were sent to the administration and members of the Board of Trustees.

Ruscio said in a campuswide letter he asked Provost Daniel Wubah to schedule a meeting with the law students who issued the demands, and to meet with the University Committee on Inclusiveness and Campus Climate, which was designed to address diversity concerns.

“Throughout this year, UCICC and the Office of Student Affairs have been holding focus groups with students to discuss some of the very issues that the law students are raising,” Ruscio said.

Students issued four demands, promising to engage in civil disobedience if they were not met by September 2014:

See this right here pisses me off to no end. I hate the South, I really do. I tried to give these people the benefit of the doubt, but they’re just so, so, so stupid. There is literally no hope for these infra humans. I wish General Sherman had nukes instead of torches, because the only hope for that part of the country is to just annihilate the population and start over from scratch.

People really don’t celebrate Martin Luther King day? That actually happens? I mean, if I’m a school administrator at a University in Virginia, named after a guy who led a giant army defending the right to own black slaves, I’d probably make extra sure to celebrate MLK day. At least try to throw us off the scent a little bit.

Look, I’m gonna settle this whole confederate flag debate once and for all. Obviously it does represent racism and slavery. Obviously. But morons in Georgia will tell you that they weren’t racist, they were merely defending their way of life from an oppressive federal government.

For that reason, you have to move away from the race issue with these idiots. They’ll never see what’s right in front of them. Call them what they really are: Treasonous. Anyone using the confederate flag for anything besides wiping their ass, should be immediately arrested for sedition. 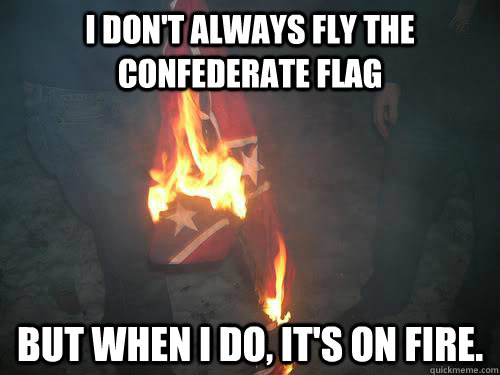 Ya see, the confederate flag represents a terrorist organization, that called themselves a “country.” They’re no more a country than Al-Qaeda. They’re just a group of fundamentalists with guns who wanna kill real Americans because they hate the fact that we represent freedom. They are the most successful terrorist organization in the history of the world. They are responsible for 650,000 American deaths in their failed insurrection. That’s almost 200 times the amount of casualties Osama bin Laden pulled off. Al-Qaeda would literally be in awe of what those following the confederate flag were able to accomplish.

Oh yea, and did I mention they killed the greatest President in the history of this great nation? Abraham Lincoln was elected by the people of the United States. It wasn’t close either time he was elected either. The people OVERWHELMINGLY wanted him. After his first election, you didn’t even wait to see what he was all about before declaring war. If he won in 1860 you were going to kill other Americans. That is the definition of a terrorist.

Then after General Sherman burnt your imaginary country to the ground, Lincoln was elected again. You responded by killing him and aiding his assassins in a 12 day manhunt. Imagine if Bin Laden had killed President Bush. Would these idiots be flying Al-Qaeda flags and bragging about their heritage? Of course not. But they’re too stupid to see this obvious parallel. 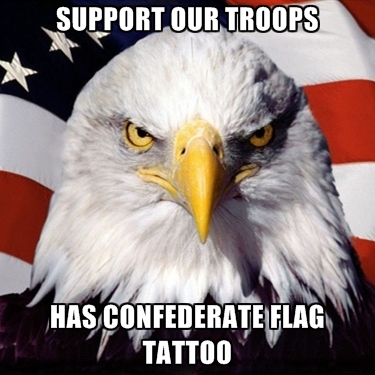 The irony is that these are the same people who claim to love ‘Murica. “If you don’t like it leave it,” and “kick out all the illegals” are the usual battle cries nowadays. So the race card against these people isn’t nearly as effective as the treason card. They consider themselves the ultimate patriots, but when faced with this undeniable truth, they simply have to admit that the confederate flag represents a terrorist organization.

The whole confederate flag obsession makes my head want to explode. These people honestly think they’re celebrating grits, lemonade on the veranda, and mint juleps. They have convinced themselves that the flag represents some imaginary laid back lifestyle where everyone lived in harmony until the evil federal government showed up with their guns and fancy “integration.” Here’s some of the more popular arguments, from the Facebook page “The Confederate flag is pride of the south and not a racist flag.”

Pride and honor? Pride in what? NASCAR and Alabama football? How are you idiots proud of a flag that represents a make believe country that got their asses kicked? That’s like being proud to be a Cleveland Browns fan. You are the definition of a loser Alexios.

What are these idiots smoking? Your flag doesn’t stand for slavery? Maybe it doesn’t have a picture of slaves on the front, but you declared war on the United States of America because you were unwilling to compromise on the fact that black people could be bought and sold as property. Please tell me how that is not racist or symbolic of slavery.

So let me get this straight…..A “confederate” state attacked the United States military, but it wasn’t their fault? Newsflash – it doesn’t matter what you think your stupid flag represents. The fact of the matter is that it represents one thing, and one thing alone – TREASON. If you fly that thing in your yard, you should be shot. Period. You are a traitor to this country, and you’re celebrating a flag that represents an imaginary country that STARTED a war which led to the deaths of 650,000 Americans – more than the rest of the wars in American history combined.

And the U.S. government DROVE them to that point??? Conservatives gone wild right here. See, liberals blame the government for DRIVING Al-Qaeda into the 9/11 attacks. Conservatives blame the government for forcing the South to declare Civil War. It’s just a bunch of bullshit on both sides. People attack America because they’re selfish asshats who prefer violence to diplomacy. In this case they were “driven” to attack the United States of America because the people had the audacity to freely elect Abraham Lincoln, which of bunch of non-slave owning rednecks thought was worth dying for. Yea, celebrate that you nudniks.

How brain dead are these people? You’re like the cow that keeps touching the electric fence, forgetting each time that they’re about to get shocked. Every time you idiots “rise again” you get smacked down. Haven’t you figured that out yet? You “rose up” during the Civil War, and you got destroyed. You rose up against Civil Rights, and you were repeatedly pummeled by the Federal government. Newsflash – they have more guns than you. They have nukes. They have international recognition as a sovereign nation. You have rednecks and flags. So go ahead and rise up again morons.

And your stupid flag isn’t an American flag at all. Not even close. It represents an imaginary country that was NEVER recognized by a single other nation in the world. I mean you idiots couldn’t even get BRITAIN to recognize you, and they would’ve taken any opportunity they could get to take a giant, steamy dump on America. 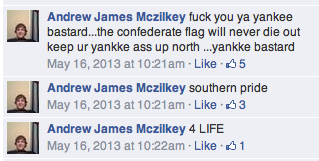 Ladies and gentlemen, I present to you the most useless person in America, Andrew Mczilkey. Sadly, his delusional way of thinking is par for the course down in Dixie. 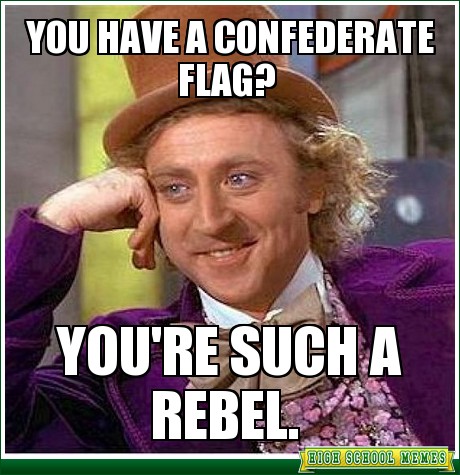