Pembroke is a boony town in the south shore I’ve spent a lot of time in. There isn’t a lot of crime there, but there is rooster beef. Not even joking either – the biggest ongoing saga in town for the last 5 years. It’s been an ongoing saga that revolves around this woman and her rooster: Kaitlyn Bergin lives on a busy road called Mattakeesett Street, close to the center of town. Across the street from her is Rich and Donna Restucci. Kaitlyn has appointed herself some sort of animal rescuer, taking in dogs, chickens, goats, and other livestock over the years, and at times has had over 40 animals on her property. The Restuccis seem like completely reasonable people, but they’ve reached their breaking point with their rooster whisperer neighbor. Two years ago the Restucci’s took her to board of health with a complaint because her roosters can’t seem to shut the fuck up.

Rooster owner Kaitlyn Bergin of Mattakeesett Street has been given 10 days to comply with the town bylaw that prohibits excessive noise. Further violations could bring $50 fines. On Monday night, the town’s board of health held a third hearing session on complaints that have been filed by Rich and Donna Restucci, who live next door to Bergin. The Restuccis say Bergin’s roosters create noise that violates the bylaw, which states that excessive noise is not allowed between 10 p.m. and 7 a.m. on weekdays and between 10 p.m. and 8 a.m. on weekends.

In a video provided to the board by the Restuccis, a rooster can be heard crowing. The video shows the date and time, establishing that the noise was made at an hour when excessive noise is prohibited. Bergin said she leaves for work at 6:30 a.m. and has to let the roosters out before she departs. She said the upcoming change to Eastern Standard Time will solve the problem.

Board of health member Gary Fine said, “We are trying to follow the letter of the law by giving Ms. Bergin 10 days to comply. We had a small uproar at our meeting two weeks ago, and we didn’t want to let that happen tonight. She may already be compliant, but she has 10 days starting tomorrow (today) to be 100 percent compliant. We are giving her time, so there is fairness with that component.”

If, after the 10-day period, the Restuccis again complain that rooster noise is violating the bylaw, town Health Agent Lisa Cullity will visit Mattakeesett Street. If she confirms that a violation is occurring, she will levy a fine of $50.

“I asked our attorney when she came in if the board is more of an enforcement agency or a mediator,” Fine said. “We tried to mediate but were unable to, and then had to regulate.”

At the board’s first meeting on the issue, Bergin said moving the rooster coop from one side of her property to the other was a possible solution. But she also said she would not be able to afford the cost, which she estimated at several hundred dollars.

Yea, it seems to be that if you can’t afford a couple hundred bucks to move your rooster coop from one part of your yard to the other then you probably shouldn’t be playing Noah’s Ark on your property. But that’s just me.

Two years ago Kaitlyn spoke at a board of health meeting with the Restuccis who played video of the rooster’s crowing (1:07:00), and Kaitlyn claimed that she has 4 dogs, one of who is autistic (38:55, and yes, she actually said her dog is autistic), as well as claiming that she has special needs chickens (58:05). This went on for an hour and a half. Fast forward to this week, whatever remedies were promised didn’t work out because Kaitlyn still apparently has her roosters waking the neighbors up in the morning, so she was back in front of the board of health once again to account for her naughty cocks. According to her the neighbors should put in earplugs, and she wasn’t happy with the resolution. This is what qualifies as drama in Pembroke. It’s all everyone’s been squawking about on Pembroke Connect Facebook group for the past few years. Seriously, just type in rooster and see what comes up in the search bar. It’s really simple – the town bylaws say your rooster has to shut the fuck up before 7 AM. Failure to do so results in rooster expulsion. Plus, this isn’t her job. She’s not a farmer. This is literally just a hobby for her. She sells chicks for $5 that she breeds with the rooster, and sells their eggs for $3 a dozen. She can’t be making much money off of this. And this is on a busy road, on less than an acre of land, in which neighbors really aren’t far apart. That front yard is where dreams go to die.

The Restuccis were there first. They wouldn’t have moved into a house if they knew they had to deal with this rooster all the time. And they’ve been very patient over the years. Here they are in 2015 trying to make light of it.

Kaitlyn is constantly posting in the Pembroke Connect group about her animal drama. Earlier in the year she admitted to antagonizing and recording her neighbor’s dog barking. 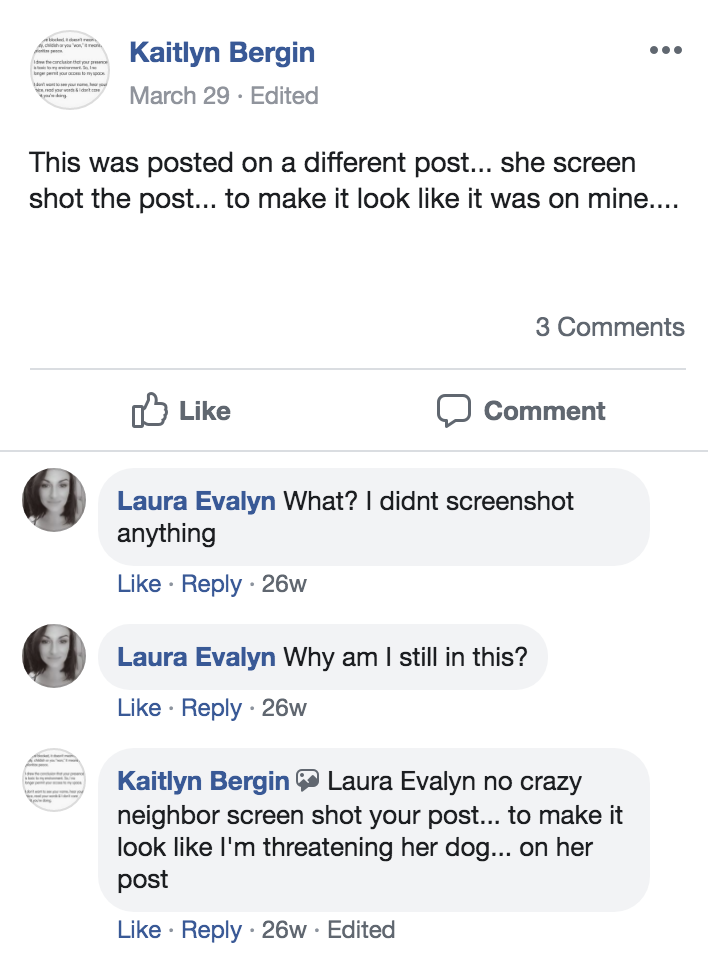 She’s had issues with her goats on her own roof. Has some GoFundMe’s for the dogs she brings in. Two years ago she announced on Facebook that she would be disregarding the Board of Health’s sound advice to stop posting rooster beef on Facebook. And since Pembroke is a right to farm community, the townsfolk are divided on the rooster beef. The bottom line is that she’s choosing to be a pain in the ass and a nuisance. She doesn’t live on some 40 acre farm in the middle of nowhere. She has neighbors, who she doesn’t seem give a shit about because her hobbies trump their right to relative peace and quiet. So I’m with the Restuccis and the board of health on this one.