This is Rachel Corey from Newton. She’s an angry little man consumed with white guilt who wants to abolish all prisons and has spent her entire career working in the insulated worlds of Academia and well funded non-profits. Defund is too close in spelling to defend for my liking.#AbolishThePolice

She hates cops (obviously) almost as much as she hates attempting to pretending to give a shit about her physical appearance, so naturally then she campaigned for Rachael Rollins for Suffolk County DA.

But she took it one step further over the weekend by posting pictures of Boston cop’s house in Newton, doxxing him, and urging people to go to his home and harass him for the crime of making too much money on overtime shifts. Perfectly normal, non-terroristic behavior from your run of the mill neighborhood Marxist.

She hates cops, but who does she like? That would be first degree murderers, since most of her “best friends” are currently incarcerated. And by “best friends” I mean, “black people convicted of violent crimes who she treats like pets.” One of the people she advocates for is Derrick Washington, who keeps getting his privileges taken away in Shirley Max due to the fact that he can’t follow the rules. She visits him a lot but apparently can’t follow the rules either, which is why she was banned from visiting him for a year. Derrick pulled some strings and got his white guilt ATM back though. Derrick is a swell guy, who just so happens to be incarcerated for the rest of his natural life because he set up three men to be murdered in an attic in Springfield, after luring them there by pretending to be interested in purchasing crack cocaine. Unfortunately for him one of them got away and was able to ID him.

White’s younger brother, Adrian E. White, 23, was killed in a 2005 double-homicide at 121 Suffolk St. He was shot execution-style in the head and back during a robbery. He was killed along with another man after three men ushered them and a third intended victim into the attic of a home, according to trial testimony. Tyrone “Tee Jay” Lewis Jr., 22, also was killed; a third man, who was not identified during a Hampden Superior Court trial for his own safety, testified to a convoluted story in which White drove Lewis to the house following a call from their assailants for crack cocaine. Three men ordered the trio up into the attic and shot at them, the witness said.

“Tee Jay and Adrian and everybody was pretty much crying for their lives. … They (the defendants) started counting down; … I was praying,” the witness told jurors, adding that the shots aimed at him missed.

They cried for their lives but Derrick Washington showed them no mercy. He murdered two black men. Black lives have never, ever mattered to Derrick Washington, because he is an animal devoid an any human compassion. You’ve likely never heard the names Adrian White or Tee Jay Lewis, because these black men were killed by another black man, not a white cop. Therefore their lives never mattered to black lives matter, and their killers are supported by black lives matter. Tamik was one of several prisoners involved in a violent attack at Shirley Max in January that nearly killed a corrections officer.

He’s also serving a life sentence after escaping from jail in 2011 to avenge the shooting of his mother, but accidentally shot and killed a completely innocent man and a barber who survived 11 gun shots. He then went and shot a state trooper and a Springfield cop from the trunk of a car he was hiding in. To make matters worse the deceased victim’s name was Innocent, and he was a married black father who left behind a grieving widow. You’ve never heard of him because he was killed by a violent black gang banger who black lives matter now aligns themselves with. Perhaps if he was killed by a white Springfield cop his life would’ve mattered to racists like Rachel Corey.

Another guy she really goes to bat for is Wayland Coleman, who keeps ending up in solitary confinement because he is a professional asshole. Wayland is in jail for, you guessed it, first degree murder. In 1997 he shot and killed an unarmed man outside of a Worcester nightclub after getting in a fight. The Globe and SJWs love this convicted killer because he complains a lot and led a hunger strike two years ago because he didn’t like the tap water in Norfolk. He started the “deeper than water” organization, which basically consists of him and other violent offenders whining about how they’ve been “dehumanized” because they’re referred to as inmates. You know who else felt dehumanized? The guy he shot, killed, and then shot again as he lay lifeless on the ground.

Since being incarcerated for murder Wayland uses dumb people like Rachel Corey for financial reward. Deeper Than Water organized a boycott in May of prison food. Except prisoners like to eat and no one wanted to join his stupid protest, so it was problematic. Wayland used funds from people like Rachel Corey at Deeper Than Water to bribe prisoners into participating by promising to fill up their canteen funds so they can live off of food from the commissary instead. 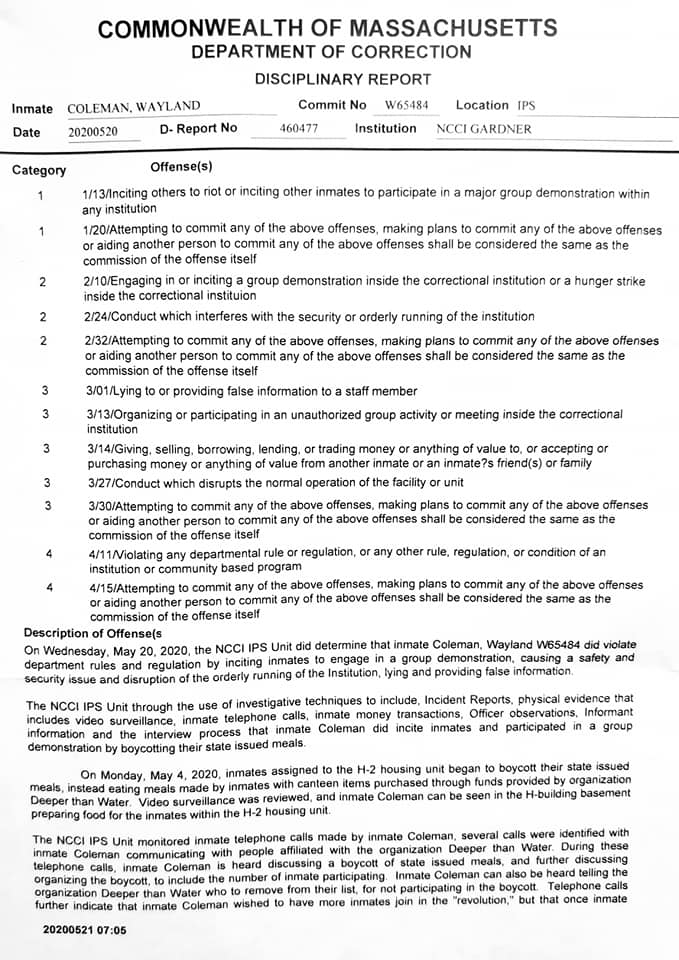 The year before he was disciplined for using the prison’s phones to participate in a social justice podcast and become a cause celebre for white women like Rachel Corey. This is who black lives matter really cares about. They hate law abiding cops because they have the audacity to (gasp) work overtime shifts, but they really like convicted murderers who kill black men because black lives matter, or something.