But I must confess that I still listened to the Mut and Callahan show in the morning because Gerry was still good radio. Even if you’re not conservative like he is, he’s still interesting and entertaining. More importantly he actually does really well with liberals. Alex Reimer and Gerry have chemistry, and even though they disagree on pretty much everything, they still have good banter and you can tell no one’s taking it personally.

Take this morning for instance. Gerry and Reimer were arguing about Megan Rapinoe and I listened to every word of it. I completely agreed with Gerry, and he’s the only guy on the station who would ever say what millions of people are thinking about that self serving narcissist. But Alex plays his part too, pretending to stand up for her, and it makes for good radio.

Then this happened today.

Well, that was fun. After 20 years in morning drive, I did my last show on WEEI this morning. Thanks to all who listened. Unfortunately, this ain’t a movie. Sometimes the bad guys win. Much more to come.

Thanks. I thought it was a good, fun show. Sadly not everyone agrees. Dark forces at work still. https://t.co/lw3hUnFGaz

And it’s official – I will no longer be listening to WEEI ever again. Even though I have nothing against his replacement.

I’ve always liked Greg Hill. He’s entertaining and good for what he does on WAAF. It was always a good alternative to WEEI if Gerry or Kirk was talking about golf.

But he was good for WAAF, not a sports talk station. And he’s bringing Danielle Mur with him, who again, is good for what she does on WAAF, but really doesn’t belong on a sports talk radio station. Mut is now moving to the night show, where careers go to die.

WAAF is going to play music while they do a nationwide search. And whenever a local radio station does a national search the results are usually God awful. Just ask WEEI how Mike Salk worked out. Remember what an abortion that guy was?

Until then WAAF is going to play music in the morning, and most of Hillman’s followers will just turn to WEEI instead of WAAF. In other words, they think that music on WAAF will get higher ratings than the Mut and Callahan show, and because of how neutered they were attempting to make that show, they might actually be right.

Of course the biggest reason they’re doing this is because the idiots at the top of this powerful company (Entercom) are PETRIFIED of this chud. This is largely Bob Murchison’s doing, although according to sources being reported from Entercom Boston, the Boston Globe’s Shirley Leung was the bigger factor.

From people behind the scenes in Entercom Boston, the insanity of recent events is unsurprising. pic.twitter.com/MOiqPZEu8m I can’t tell you how infuriating it is to see the Boston Globe pretend to be real news. They haven’t been real news in years. They are an activist propaganda outlet owned by the Red Sox, that harassed WEEI’s advertisers in bad faith until many of them left.

But they worked hand in hand with Murchison. If you need to catch up on who this guy is click here to read the many blogs we’ve published about him. The long and short of it is that he’s an extremely wealthy guy with too much time on his hands, who uses his transgender son as an excuse to lead a never ending crusade to dictate the content of what was once the most popular sports talk radio show in Boston. Murchison probably listens to WEEI every day, takes notes on anything “offensive” Gerry says, then writes down the advertisers so he can harass them relentlessly in bad faith with misleading emails. You can read all of the INSANE emails he sent here. Here’s a small sampling of stuff that producer Joey Zarbano personally sent me, then asked me not to tell anyone because it could get him in trouble. “These radio personalities have a long history of controversy on race, gender, and sexual orientation.”

Then he links Wikipedia. Wiki-FREAKING-pedia!!

I say that it was done in bad faith because Murchison goes out of his way to misquote, and misrepresent the conversations he was cited as evidence that Kirk and Callahan were problematic. Like this one he copy and posted to all of the advertisers, claiming that Minihane was talking about “children’s bodies.” The implication there to advertisers is clear – Minihane thinks pedophilia is funny. The large corporations outside of the Boston area probably have no idea who he or Dave Portnoy is, and don’t understand that they’re referring to Portnoy’s infamous controversial blog from 2011 showing Brady’s son naked on a beach. They just see “children’s bodies” and want to distance themselves from it. Murchison does this on purpose. He knows he’s misrepresenting them. He knows that if he’s honest about the context of the conversation no advertisers will want to leave. That’s how much of a lowlife he is.

He does it with obvious sarcastic jokes about racism too. And it works because the people who run corporate America now are all gutless social justice poons who shit their pants the second they get an email from some random guy of no consequence in Sherborn. Well, two can play that game. Here’s an email from Greg McGlone at the Radio Agency in Newton, canceling ads during the Kirk and Callahan show. 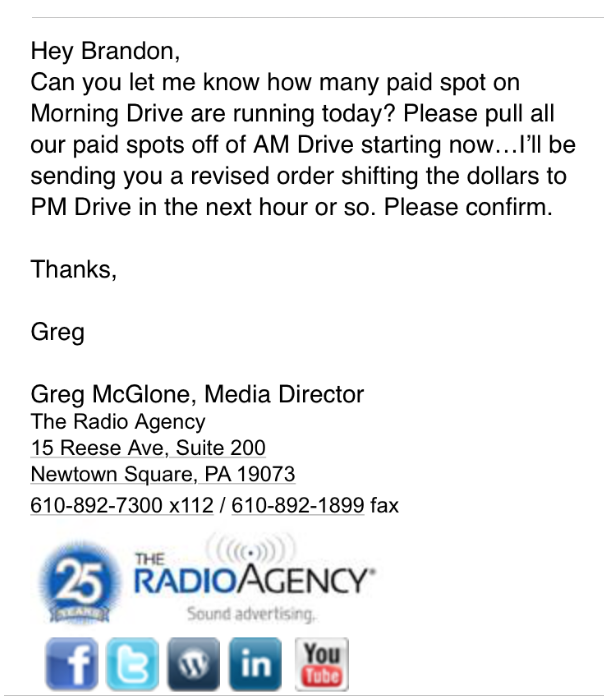 Whatever you do, DO NOT flood the Radio Agency’s Facebook page with negative reviews. I mean, I’d love to harass a company because of a business decision they made, but I don’t want to stoop to Bob Murchison’s level. Only he gets to mess with people’s livelihoods for sport.

They have a wide open Facebook page you can leave reviews, but again, we urge you to NOT give them negative reviews as a result of this. Please!! Hey Ed, give me a buzz. We’d love to have you on as an advertiser at Turtleboy.