The other day Dave “El Prez” Portnoy called into the Kirk Minihane Show to cry about Turtleboy pointing out that his employees were raising money for domestic terrorists by sharing links to the Minnesota bail fund and other radical organizations. He did this because his employees got their feelings hurt when they were called out for it, and instead of telling them to be a grown up, or stop supporting domestic terrorism he insisted that this was OK because they were only doing it on Twitter and not on podcasts or blogs, which are Barstool’s intellectual property. 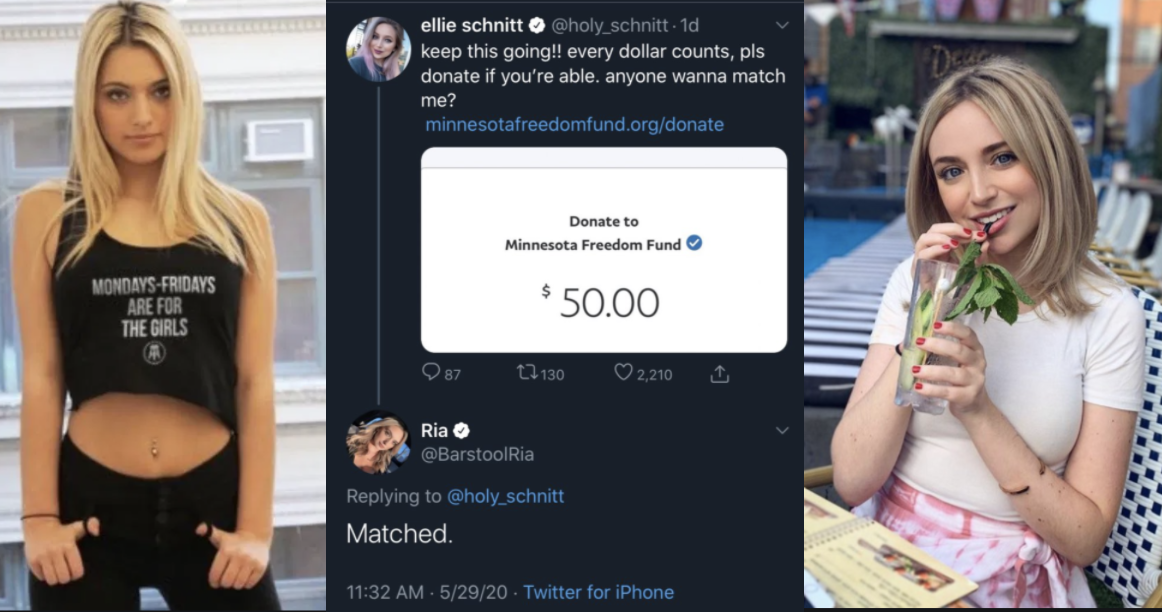 Elllie Schnitt, the simple minded blonde chick who was leading the movement has refused to debate Kirk on it, and the basic bitch mafia has gone to bat for her.

Bro. The money is for the peaceful protesters who have been wrongfully arrested. This is lazy. You’d know this if you read even one of the fund descriptions. There are more pressing topics to be using your loud mouth for.

See? It all makes sense now. The money is only going to the “peaceful protesters” who were arrested for rioting and looting. These bail funds are very specific about who gets bailed out with donated money. And lots of rioters and looters are known for their non-violence and peacefulness.

This is her producer Michaela Okland.

Mocking your female coworkers who are wildly more talented and successful than you just because they are raising awareness for the BLM movement & donating money to bail funds seems like a pretty pathetic move just because you’re too dense to understand systematic racism https://t.co/af9oHuA94r

They talk about The Bachelor.

He took a dying radio station and brought the morning drive show to #1 in the ratings. He got where he is because he’s talented. Ellie and Ria and have their jobs because they’re pleasant to look at. If either of them were 15 pounds heavier they’d be waiting tables at Denny’s.

But yea, the white chick whose entire understanding of social issues was learned from what she reads from virtue signaling twats on Instagram is here to lecture Kirk on “systemic racism,” a new buzzword she learned about 5 days ago.

Michaela has hundreds of thousands of followers as well because she looks like this. She’s just another attention starved “influencer” who only gets attention because guys wanna bang her.

She’s also a big fan of burning down police stations.

Will @holy_schnitt practice what she preaches and burn down police precincts until we see change? Or is she just pandering from her ivory tower? pic.twitter.com/efqImaD4Y4

This is an actual conversation that took place on Barstool Sports intellectual property:

Basic Becky 1: If we burn down a police precinct every time there is unjust violence towards the black community by a police officer, I think we would see change pretty fast.

Basic Bitch 2: I agree with that.

Cool business you got there Dave. Maybe Tucker will bring this up the next time he has you on for a ticklefest while you pretend that you’re not running a cooler version of Deadspin.

Then there’s this guy. He goes by Coley Mick and he’s another Barstool personality. As you can see, he’s a grown man with a chinstrap who wears flat brimmed hats and looks like he’s about to ask you if he can bum a cigarette, so he’s obviously a huge asshole.

Yesterday Saints future Hall of Fame quarterback Drew Brees became the woke mob target of the day because he said that he will never agree with people disrespecting the flag.

Highlight: @readdanwrite asks @drewbrees what the star NFL quarterback thinks about "players kneeling again when the NFL season starts."@drewbrees: “I will never agree with anybody disrespecting the flag of the United States of America or our country.”

I don’t even necessarily agree with this stance, but he’s free to have that opinion, and there’s certainly nothing wrong with him saying it. But of course the woke mob piled on him and demand that he apologize, which is what woke mobs do. Barstool Sports used to fight the woke mob, but now they have become it with Coley Mick’s hot take. But remember what Dave Portnoy told Kirk Minihane, he only allows his employees to be political activists on social media, not the blog. Except when they publish blogs calling Drew Brees spineless for his supporting his country.

Newsflash – the spineless thing to do is go along with the woke mob. That’s easy. No one’s gonna demand you be fired or apologize, and I’m certainly not advocating that Coley Mick or Ellie be fired for promoting the burning of police stations. But when you say how you’re really feeling despite knowing that the mob will come after you like Drew Brees did, that is what actually bravery looks like.

Of course thanks to websites like Barstool he had to offer this humiliating apology for being patriotic today. I mean, who hires these people?

He’s also supporting bailing terrorists out of jail and thinks that money donated will only go to the “peaceful” protesters.

If not, they’d be pretty hypocritical, right?

Please educate yourself on bail funds. They're literally for non-violent crimes only.

The idiocy of that tweet would take hours to dissect. But let’s just stick with the fact that our tax dollars pay the police, and they’re not a charity we donate to. Here was his response to getting called out for being a moron. So yea, I’m sure Dave will cry about this again when people flood his mentions because his employees are urging people to burn down police stations and joining woke mobs to shame Drew Brees. But instead of calling into Kirk’s show why doesn’t Davey Mouse just debate me on it? He obviously knows who I am, I’m in his head, and deep down inside he knows that I’m right. He started a controversial blog that never backs down and called out SJWs on their bullshit, and now Barstool has become everything he fought against.