Three more days until the Super Bowl and Patriots nation is fired up for the Pats to finally tie the Steelers for most Super Bowl wins in NFL history. Over 35,000 people showed up in the freezing cold for the sendoff at Gillette stadium. But of course the Boston Globe, which is owned by Red Sox owner John Henry, cannot stand them. There’s a few reasons why:

That’s why the Globe had to put out a headline today about the Patriots that was the same exact headline they put out two years ago:

Dugan Arnett two years ago and today. The Globe/John Henry hates the spotlight on the Patriots. pic.twitter.com/IWDOddk6Ga Of course they chose to use a cover photo of Tom Brady and Donald Trump from 2004. Something that clearly shows that their hatred of the Patriots is entirely grounded in politics. The Patriots are Trump’s team, and the Red Sox are Team Woke. That’s why they’re renaming Yawkey Way and blindly believing Adam Jones’ obvious lie. That’s why Dan Shaughnessy won’t vote for Curt Schilling for the Hall of Fame.

“No one likes the Patriots anymore because they’re Trump’s team.”

That’s the agenda they’re going with. And since the Boston Globe is fake news they come up with the agenda first, and then try to write a story based off of that.

Want proof? This is Dugan Arnett, the guy who wrote both those stories: As you can see, he’s not yet old enough to grow pubes, which is exactly why the Globe hired him. This is what all newspapers are doing – getting rid of experienced journalists who have the audacity to want a raise after 20 years on the job, and replacing them with some kid from Missouri right out of college who will work for half of what the veteran journalist wanted.

Look at what young Dugan has been up to on the Twitter machine for his “research.” Hi Samantha! I'm a writer at the Globe working on a story about how spoiled Pats fans have become with their annual trips to the Super Bowll, and I came across your funny tweet. Would you have time for a quick phone interview today, by chance?

This is what constitutes journalism in 2019.

Be more awkward. You can’t.

She was hardly the only person he tweeted at either. Tell me if you see a theme. He literally copy and pastes each one, including the “funny tweet” nonsense, and then changes the person’s name.

But he doesn’t actually follow or know any of these people so how did he find them? Simple – he searched “Patriots spoiled,” on Twitter, and messaged the first three people who tweeted using both of those words.

It’s actually what Dugan Arnett does with all of his once a week stories that the Globe pays him to write. Last week the narrative he established first was, “People don’t like other people who wear backpacks on the T.” So he searched for “MBTA backpacks” and messaged everyone who was complaining about people who wear backpacks on the MBTA. And once again he copy and pasted about the “funny tweet.” 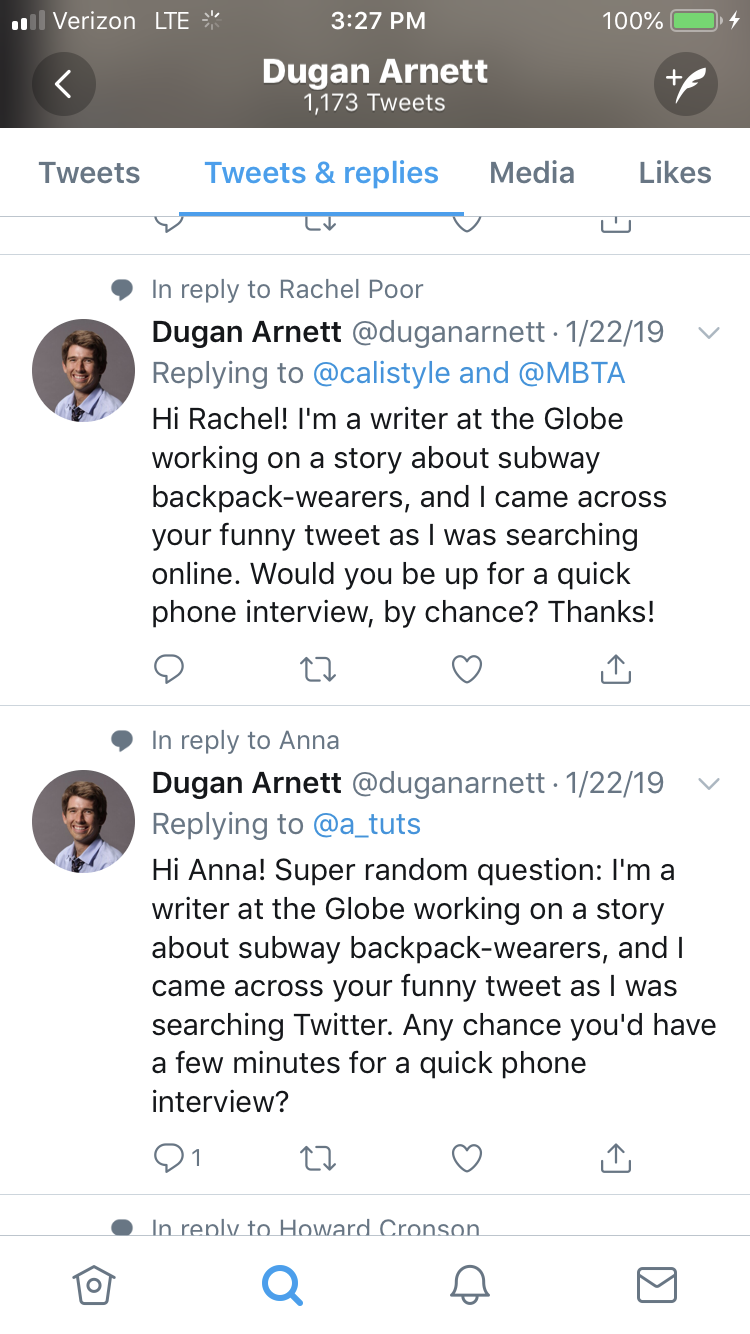 Hi Anna! Super random question: I'm a writer at the Globe working on a story about subway backpack-wearers, and I came across your funny tweet as I was searching Twitter. Any chance you'd have a few minutes for a quick phone interview?

Hi Rachel! I'm a writer at the Globe working on a story about subway backpack-wearers, and I came across your funny tweet as I was searching online. Would you be up for a quick phone interview, by chance? Thanks!

The week before that it was, “what should we call the PawSox when they move to Worcester.” In November it was really groundbreaking journalism – finding out who works out on Thanksgiving so they don’t get fat. And before that the narrative was, “People play Christmas music too early,” so he went out and found people complaining about that topic. This is what “real news” looks like from Boston’s newspaper of record.

Dugan is totally unbiased in his reporting too. It’s not like he comes from a family where he was brainwashed to believe, “orange man bad.”

Just learned that my parents went as a “Blue Wave” for Halloween. pic.twitter.com/GJgpwvsZF8

Could first person quoted in @BostonGlobe @duganarnett Patriots fan apathy story be same person quoted in @NestorARamos Lamborghini story? Does the Globe have a go-to rolodex for news manufacturing? pic.twitter.com/glLb31ImVj

Might be a little confusing so allow me to explain.

First, this is what Globe columnist Nestor Ramos had to say about the Patriots two years ago.

Columnist @NestorARamos doesn't like the #Patriots. But that would change if they sign Colin Kaepernick, he writes. https://t.co/GP0l8Ggoxj pic.twitter.com/zgsRttdsX2

I just really want Nestor to be happy

He writes for the local newspaper, but he doesn’t like the local football team unless they they sign a washed up quarterback whose politics Nestor agrees with. He’s the same guy who after Red Aurbach died accused him of integrating the Celtics, but only because he wanted to win, not because he was a good person.

Well Nestor Ramos recently wrote a story about how rich people who buy fancy sports cars are all douchebags who park in handicapped spots. To prove his point he interviewed a guy named Andrew Kubitschek, who was riding his bike home when he spotted a Lambo parked in a handicapped spot. That never happened. Ya know how I know that? Because Dugan Arnett interviewed that same guy – Andrew Kubitschek – two years earlier in his Patriots story. This was an amazing find by Evan Lips. These Globe people must keep a list of 5 people they can call up for quotes to reinforce their narratives, and act as if their opinions are representative of the collective group.

Need a quote from someone who thinks rich people suck? Call up Andrew Kubitschek. He was there.

Need someone who thinks that no one cares about the Patriots anymore? Call Andrew Kubitschek. He was there.

But you gotta give the Globe some credit. Unlike the Kevin Cullen stories, in which names are completely made up, Andrew Kubitschek is indeed a real person, and he is a Vikings fan. But he appears to be Dugan Arnett’s age, and recently graduated from the University of Wisconsin. I’m sure Dugan totally is not friends with Andrew. And any time the Globe wants to prove that Trump is evil, no one likes the Patriots, and rich people suck, they call up Andrew and he gives them what they want.

This is why you read Turtleboy. Because the mainstream media employs talentless hacks like Nestor Ramos, Kevin Cullen, and Dugan Arnett, who write stories with plotlines that John Henry already wrote for them.