DA Joe Early, Major Susan Anderson Force Troopers To Alter Report For Judge’s Daughter Who Said, “Do You Know How Many People I Had To Blow To Get That,” After Heroin OUI Arrest This is Alli Bibaud of Worcester: 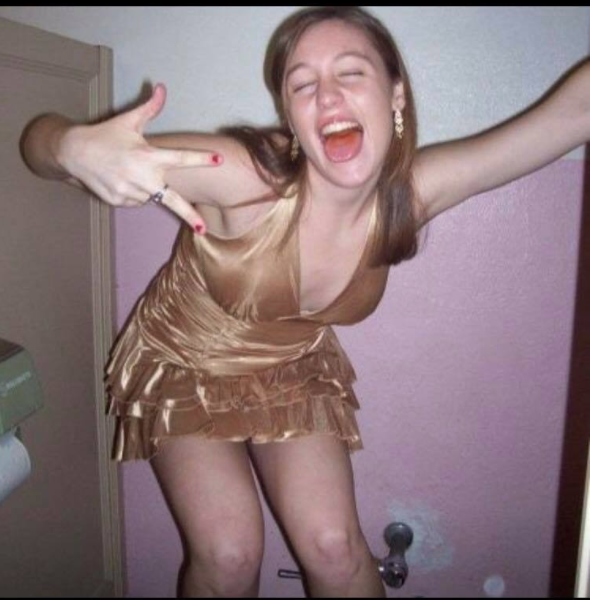 As you can see, she’s a real peach. And she’s got that disease that’s been going around where you voluntarily steal money from your friends and family in order to make sure your disease never goes away.

Alli has a tendency to have some run-ins with the law:

But it’s all good because this is her Daddy: Dudley District Court judge Tim Bibaud. A well connected guy who used to work for the DA, and has coached for various teams in the Worcester area.

Judge Bibaud has been an outspoken advocate for a different approach to the opiate epidemic:

“As the opioid epidemic continues to claim lives daily, making the public health issue of substance use a criminal justice issue isn’t helping anyone,” said Judge Bibaud, who launched the Dudley District Court on June 1, 2014. I don’t necessarily disagree with his philosophy, and I’m not faulting him for that. Just remember that quote later on in this blog.

Back to Alli. On October 16 State Trooper Ryan Sceviour from the Holden barracks responded to a crash at 7:40 PM. Alli Bibaud was the operator of a vehicle that was at fault. During his conversation with Alli, Tpr Sceviour realized that she was under the influence of drugs, searched her, found heroin, and arrested her. She responded with a legendary comment, referring to the heroin:

A drug recognition expert Trooper Ally Rei was brought in to evaluate Alli Bibaud. The report was written up and submitted, and included the legendary quote, “Do you know how many people I had to blow to get that?”

This has been confirmed to us by several State Troopers who saw the report. However, the current report does not contain this because it’s been altered. That’s because Daddy made a phone call to his good friend District Joe Early, who in turn contacted Colonel Rick McKeon, who then contacted Major Susan Anderson, who commands C Troop. C Troop consists of the barracks in Athol, Brookfield, Belchertown, Leominster, Millbury, Sturbridge, Devens, and of course Holden.

DA Joe Early Jr. is the son of nine term Congressman Joe Early Sr. A well-connected insider who would not have his job were it not for the lucky sperm he inherited. Tim Bibaud used to work for him as an ADA, and Joe was there when Deval Patrick appointed Tim a judge:

Our sources tell us that Judge Bibaud specifically asked Early to intercede on behalf of his daughter Alli. So Early called up his politically connected buddy Colonel McKeon, who made the final call to Major Susan Anderson: Major Anderson was recently the center of controversy after WCVB did an expose which revealed documents proving that Major Anderson had set an illegal quota of 60 traffic tickets per month that officers in C-Troop had to give motorists. Failure to do so would result in being put on an improvement plan. The Union isn’t happy about it, and neither are motorists. Quotas are illega, but since she’s not calling them a quota, she gets away with it.

We only bring this up to show you the kind of character that Major Anderson has. She’s not afraid to break the rules and force her troopers to do unethical things in order to be kept off a “work improvement plan.”

After Major Anderson was contacted by Colonel McKeon, Trooper Scevior was brought in, along with Trooper Rei and the State Police Sergeant who approved the initial report with the legendary quote. Major Anderson demanded that they alter the report, and because they were reluctant to do so, they were disciplined. No one was suspended because obviously the powerful State Police Union wouldn’t stand for that. But our sources tell us that they were given negative evaluations due to their hesitance to fall in line and basically lie on a report. Finally the report was altered, as well as the official log of the incident.

We felt comfortable printing this due to the alarming number of Massachusetts State Troopers who reached out to us expressing their outrage. Because the fact of the matter is that Turtleboy is where people go when they want the truth told. It’s the realest news that has ever existed. We are told the union still has the original report, but our message to the Union President was not returned.

This is why we don’t have law and order in this state. Because corrupt judges, corrupt district attorneys, and career climbing cops who act like politicians instead of cops, continue to not hold criminals accountable for their behavior. Especially if those criminals are well connected like Alli Bibaud. The fact that this report was forced to be altered is common knowledge by State Troopers in C Troop, and they’re furious about it. We contacted every state trooper we knew. All of them already knew all about it. Three good cops did the job that we the taxpayers pay them to do, and their superiors forced them to protect a spoiled 30 year old brat who was endangering the rest of us by driving under the influence.

Of course this is nothing new for Alli Bibaud. The 2009 Assumption graduate has been handed one politically connected job after another since she entered the real world. Fresh out of college she was handed a job by DA Joe Early as a Victim Witness Advocate for the Worcester District Attorney’s Office.

She wasn’t paid that much,

but at least she didn’t have to find a job by applying for one like the rest of us! Plus, Daddy was making plenty of money, so at least she had something to fall back on if she really needed help.

After that it was time for a better paying job with less work. And where did you work at that time if you were a politically connected and talentless junkbox? As a toll collector on the Mass Pike of course:

Notice that in 2009, which she was still in school, she was hired as a seasonal worker, and still made more than $20,000. Not bad for a summer job.

Alli Bibaud also loves Facebook Live, and she has a tendency to film herself in various states of fucked up. Even when she was at work, getting paid to hand out tickets that a machine could easily do for her:

I know when I used to go through these things I really appreciated it when the crackhead handing me my ticket was blowing Newport 100 smoke in my face while posting our encounter on Facebook Live. Classy! As she pointed out, she does the overnight shift, which is easy to do when you never sleep.

I assume she’s gonna take her Facebook Live videos down after this blog is published so we saved some of our favorites just to show you the type of ratchet that we’re dealing with here:

Here she is chanting “cash, money, ho’s….Hell yea” while some sort of chudstuffer is passed out in her bosom:

Here they are driving around all sorts of fucked up:

Here she is with her chudstuffer once again doing what he does best – passing out from a recent bender:

And here she is laughing uncontrollably for no reason at all:

Alli is very proud of her father, particularly because while she was working at the courthouse in the job that Daddy and Joe Early got for her, she watched her father be lenient with people like herself: According to her there are too many embarrassing people with nothing better to do with their time: Driving around all fucked up while recording yourself on Facebook Live is a valuable use of time apparently.

Oh, and she was NOT pleased that we finally closed down those tolls so that talentless hacks like herself would no longer be allowed to steal from the taxpayers by doing a job that a computer could do for us: Which was a big downer because she’d no longer be able to “sneak into the tunnels” while on the job with her friends:

This is the kind of person that Joe Early, Colonel McKeon, and Major Susan Anderson are interested in covering up for. A complete trainwreck who clearly is a danger to not only herself, but society in general. She’s filming herself driving around with her junkbox friends and she’s crashing into shit. She’s carrying heroin that she admittedly had to give out facial frosting for. And all the big guns were called out in order to protect her from the embarrassment she so deserves. But they can’t protect her from Turtleboy.

This is not only a breach of public trust, it’s outright criminal behavior by the people who we entrust to uphold the law. High ranking members of the Massachusetts State Police, judges, and the District Attorney himself. The only people who have gotten in trouble for this are the three troopers who actually did their job. If any trooper EVER pulled a stunt like this they’d be fired. Just ask Trooper Nicholas Holden, who works out of C-Troop in the Brookfield barracks, and was suspended for two years without pay because he began filming encounters from his squad car when a psychopath ratchet named Tara Brooks began to stalk him. He violated a rule in order to protect himself and has to go two years without a salary. Meanwhile his boss, Major Anderson, gets to commit criminal acts and keep her job. Makes sense.

I do understand as a father why Tim Bibaud made the call to Joe Early. But it’s unacceptable. I tried to imagine what I would do if one of my kids ended up like this. It’s gotta be hard on a Dad. But if you keep bailing your kids out, they don’t learn anything. This girl has been a trainwreck for years and for that she gets rewarded with hookup jobs. She’s not a kid either. She’s 30 freaking years old. How long is Daddy gonna keep enabling her for? I’ll never forget this amazing message a turtle rider sent us:

See that right there? This is why Turtleboy is a great thing for society. The fear of public shame can literally keep you from doing heroin. So while everyone else is enabling junkies to continue their deadly habits, we scare the shit out of them and get them back on the right track.