Apparently the prospect of being exposed by Turtleboy terrifies self-proclaimed “First Amendment Auditors” Patrick Roth and Earl David Worden, because as promised, they’re filing bogus privacy claims resulting in our video being removed by YouTube. 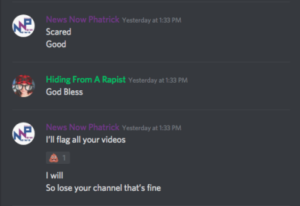 Breaking news, Patty and Earl – you just failed your First Amendment audit, because you clearly don’t believe in free speech. Luckily, we do. Here’s the thing – public record is not private information. So, Patty’s misdemeanor criminal record isn’t private. Nor is the record of the not one, but two, orders of protection taken out against him.

This video, allegedly capturing Patty beating his girlfriend is also public. I found it right on YouTube.

You know what else is public record? Earl David Worden’s sex offender registration – which is a lifetime registration, for the record.

The details of the rape case are also public record. See the link below, we’re happy to share this public information with everyone. 
Oh, and the details of his current open case for the alleged molestation of his daughters? That’s public information, too. Check it our for yourself, because sharing is caring. 
The motion to suppress filed by Rapey Uncle Earl’s attorney in 1986, that confirms Earl was a suspect in previous sexual assault cases as well? Gee. That’s public too. As is this recorded plea from one of his daughters to please stop supporting her abuser.

All public info, boys. Sorry to inform you. Sending your cronies to harass, insult and threaten the daughter you allegedly victimized is a top-tier level scumbag move we don’t see every day, though, Earl. Kudos.

Patty and Earl have vowed to take down our live stream tonight. But we can’t back down based on the threats of a couple career criminal communists who want to hide from the truth. Sorry, Patty. You can run, you can hide, you can attack us and lie all you want. But, I regret to inform you, that unlike your biological father – the truth will still be there regardless. We know you’ve been working overtime to shut down anyone who dares to speak up about you. You should know that we’re not afraid. See you tonight at 7pm, fellas.