Apparently cop killer Jorge Zambrano’s brother is up to his old tricks – shaking down people for cash in a threatening manner. We got a message from a turtle rider yesterday who has provided us with LOTS of reliable information in the past. We’re talking Top 10 turtle informers of all time, so we trust him. Apparently a couple of years ago he moved into an apartment with his girlfriend that was owned by Giancarlo Zambrano. Giancarlo’s “contracting” company was supposed to have renovated the apartment, but it never happened.

He also says that he told Zambrano to take him off the lease because he was moving out, broke up with his girlfriend, and was not going to pay her rent. He tells us that Zambrano OK’d this. So Zambrano took him to court (we will be looking into this) and he claims that he won because Giancarlo never renovated the apartment as promised, and the turtle rider was not living there during the months that Zambrano alleged. The debt is his ex-girlfriend’s.

Worst of all the turtle rider says that Giancarlo brought his enforcer – deceased cop killer Jorge Zambrano – to threaten him. Several people have messaged us about this business relationship the brothers allegedly had. Giancarlo was the brains and ran the books, and Jorge was the muscle. Anyway, Giancarlo must be short on cash lately since the media is watching his every move. Last month Giancarlo Zambrano was scheduled to appear in court. Does this sound familiar:

Giancarlo Zambrano, 35, of Sutton was charged two years ago with larceny by scheme after he accepted $7,000 from a woman in Jamaica Plain to do vinyl siding work on her property, according to the Suffolk County District Attorney’s Office. The work was never done. Zambrano was put on pre-trial probation last year on the condition that he pay all of the money back with half of it due by April 28.

Sound familiar? It’s the same story this turtle rider and several other people have told us about his business work. He got paid for work he never did. In this case today it’s the opposite – he was promised the money, never did the work, and still wants to get paid. Because Ashley Losapio’s gold encrusted sunglasses don’t pay for themselves. Google “Giancarlo Zambrano contracting” and look at all the different companies that come up. That’s one way to get rid of your shitty reviews – start new companies. Of course Giancarlo didn’t show up for his court appearance when he was scheduled to:

Zambrano initially failed to appear in West Roxbury Municipal Court Thursday and an arrest warrant was issued. The warrant was later withdrawn after Zambrano appeared provided the court with a check for $4,000, bringing him into compliance with the judge’s orders. He must pay the remaining $3,000 before Oct. 28 or the case will head to trial. 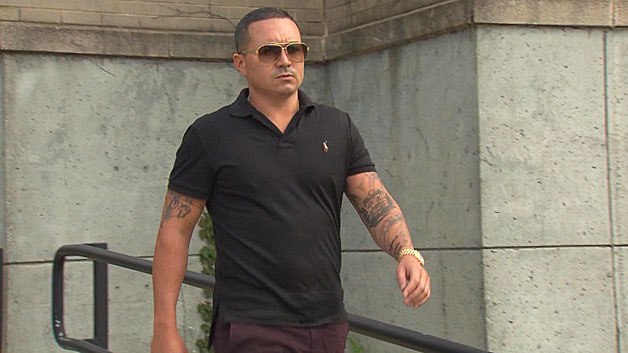 So basically he showed up when he felt like it, and paid what he felt like paying. And this was OK in a Massachusetts courtroom. Obviously he does not have the money, or else he would have paid it all. Too many trips to exotic countries with Ashley Losapio.

Plus his money collector is gone now so getting his hands on cash is gonna be more difficult. That’s why this message he sent the turtle rider in question made perfect sense: When the turtle rider told him he wasn’t paying, that’s when the implied threats began: “You can run but you can’t hide.” Yup, that doesn’t sound like an implied threat. It’s not like he comes from a family of murderers. If this turtle rider actually owes him $6,200 as he alleges, then there is a process in place to get it. If indeed a judgement has been rendered and the defendant has not paid, then you hand the judgement off to sheriff and he takes care of the rest. Because it’s the job of law enforcement to let debtors know that they can’t hide, not shady contractors like Giancarlo Zambrano.

But yet Giancarlo was insistent that the two meet up in person: Then he left this really nice message:

“I have a judgement for $6,200 in your fucking name, you fat fuck, so send me your fucking address so I can see you in court….bitch!!”

This is coming from a guy who Turtleboy commenter Nancy Smith alleges is a great businessman. He sure doesn’t sound like the nice guy he was purporting to be on our Facebook page: So yea, if Giancarlo can prove that this man does in fact owe him $6,200 that wasn’t paid then we will gladly show the judgement to the world. If we were in his position we would definitely want to set the record straight, and since he claims the judge rules in his favor, all he has to do is just take a picture of the paperwork and sent it to Turtleboy. We’ll be waiting.