Back in October, a human interests fluff piece made the rounds, about a couple of junkies living in a state forest campsite at Shawme-Crowell who were being forced to leave. Because, you know, state forest camping is seasonal, and it was fucking October.

“Jessica and John Hayes, now marking four months clean and sober from addiction to heroin and fentanyl, are in a recovery program and trying desperately to accomplish two things – get a home and get their children back.

“One thing depends on the other,” said John Hayes, who is now working again, and along with his wife (who has secured two jobs), makes the rounds of group meetings, therapy sessions and weekly tests to prove he is drug-free.

“If we have a steady place for our family, a roof over our heads, we can be a family again.” The couple was living in a tent when they first spoke with the Courier & Sentinel last week.

But, John notes, “if the price is good, the property is gone before you can even respond to an advertisement for it. And wait lists for low-income housing seem to all run well over a year.”

When first interviewed they had until Monday, Oct. 14, in the tent. That’s when the campground closed. At the start of the week, the couple, no longer allowed in the campground, had not found housing.

″“No,” said Jess Hayes, noting some really disrespectful responses to her and husband John’s story as it made its way around local social media. “Just more stress than anything.”

By Tuesday evening, the couple reported getting a room in a motel for $360 – all of their saved cash.

“Literally all of our saved money,” said Jess, “for one week. It’s so sad.”

With paperwork in hand to prove that they are testing clean of drugs and attending therapy and counseling sessions regularly at Habit Opco in Wareham, as well as jobs to put money in their pockets again, Jessica is still finding the mountain hard to climb to get back to family life.” This story actually landed in our inbox back then, but no one ever got around to it, and in a way I’m actually pretty glad. Because God forbid we speak ill of the two struggling, devoted parents who voluntarily decided to live like this until they had to literally be booted out of the gates. They were just going through a tough time, after all. Thoughts and shares! 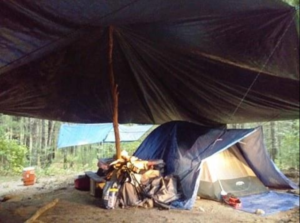 And of course, they just looking for “a hand up, not a handout.” I’m sure these two crazy kids have done great since then, and we would’ve been total assholes to point out any of the obvious glaring holes in their sob story. Right??

It’s been three months, and if you’re wondering what they’ve been up to – it’s not working hard, saving their money and parenting their kids. Nope. It’s been a whole lot of internet begging, on every town page they can get in to, with endless sob stories, requests, and “emergencies”. Less than 6 months after the junkie encampment story broke and homegirl is out here burning bridges faster than Atilla the Hun, scamming everyone with her stories of homelessness, car repairs, hotel room bills and car insurance. Seems legit. They’re going to get their kids back, any day now, they just can’t afford a whole $350 per month in bills between the two of them. Seems like their priorities are right in order. Not like they’ve been running the same flimsy scam for months, or anything. Nope, not at all. It’s actually been years. So there’s that. If you can’t even afford low income housing, the problem is you. Not the system.

Oh, and those jobs Wicked Local reported on? Gone. DCF’s fault, of course.

There is clearly no other rational explanation as to why this creature has found herself unemployed again. I just hate it when the DCF fairy comes to steal my kids, then comes back around for my job too. Naturally, Junkie Jess has been an absolute delight to anyone who dares express any skepticism towards the endless string of personal life emergencies she expects strangers to take care of for her and her able-bodied sperm donor.

They just need a little help, guys. Trust them, they’re clearly days away from getting their kids back, if they could raise the money for a rental deposit for, like, the fourth time. Jess even had the nerve to offer her unsolicited budgeting advice to a stranger who passed on the idea of funneling cash towards the two clearly able-bodied DCF parents who can’t seem to figure out how to call a homeless shelter and get off the damn streets.

Lecturing someone about living expenses after you were on the news for trying to make a Coleman tent your permanent address takes a staggering lack of insight and shame. Then again, so does intermittently begging on social media while insisting that housing is the last step you need to take to regain care and custody of your neglected crotch fruit. Because, while I do understand being low income is in no way indicative of parental unfitness, carrying on like this certainly is. For that reason, I’m going to take a hard pass on the GoFundMe and strongly suggest others do the same. No amount of money thrown at these two junkalopes is going to buy them what they really need – basic, adult life skills.