No Happy Ending: Asian Massage Parlors All Over Western MA And Framingham Get Raided From Human Trafficking A Korean massage parlor being a front for prostitution? Never thought we’d see the day!

Looks like there won’t be a happy ending for these folks:

The businesses believed to be associated with the trafficking operations, according to the attorney general’s office, consist of Hadley Massage Therapy in Hadley, Feng Health Center in East Longmeadow, Massage Body Work in Framingham, Pine Spa in Northampton and Agawam Massage Therapy in Agawam.

Feng Ling Liu, 50, her husband Jian Song, 48, both of Sunderland, and Liu’s daughter, Ting Ting Yin, 26, of New Hyde Park, New York, were all arrested Tuesday in connection with trafficking women between New York and operations in Hadley, East Longmeadow and Framingham, according to the AG’s office. Meanwhile, Shuzi Li, 52, of West Springfield, was arrested for her alleged connection with the trafficking of women between Flushing, which is in Queens, New York, and her businesses in Northampton and Agawam. Is there anyone who has more of an uphill battle than a legitimate Korean massage parlor that doesn’t give hand jobs? I can go down to Paul Conzo salon and get the couples massage with Mrs. Turtleboy and I know it won’t end up like my favorite movie. But if you’re going to a massage parlor and the person greeting you at the door looks like this: 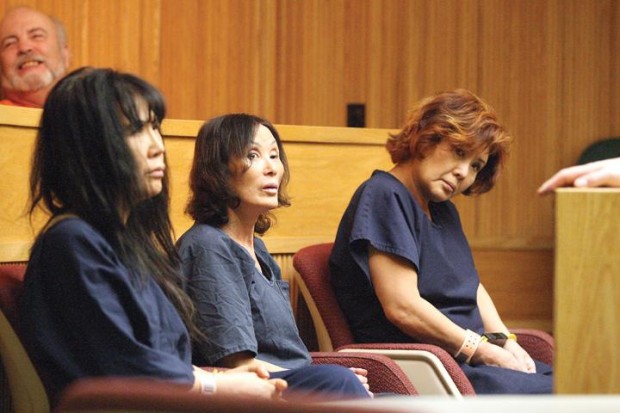 You just kind of assume something illegal is going on there. I mean, it’s blatant stereotyping, but, come on now. When you see an angry 50 year old Korean chick who looks like she’s good at enforcing rules, you just know there’s a couple girls in the back who came to American in a crate.

But what if it’s not? What if it’s a completely legitimate business that just wants to help people relax their muscle cramps? It’s gotta be hard to run a law abiding massage parlor and be Korean in the United States. Just sayin.

The best is how these places always end up getting busted. There’s always one guy who actually goes to a place like this to work out the crink in his neck. The next thing you know the poor girl from North Korea is released from her cage and she’s giving him the Kim Jong Un special. The guy then freaks out, runs home, and tells his friends about his traumatic experience at the massage parlor. Everyone who listens to his story secretly laughs because they can’t believe their friend is that dumb and naive. Also, if the massage parlor is called “Oriental Massage,” that’s code for “we do hand jobs here.”

Also, if you have to buzz your way in, or if there’s security cameras outside the door, or the receptionist greets you by saying, “boss in New York,” and it’s clearly the only phrase she knows in English, then you’re probably at a rub n’ tug place.

What I don’t get is how these places stay open for so long. Because it’s not exactly a business that you can expect your clients to keep quiet about. Plus, the one in Framingham even had a webpage with chicks in bras. They’re basically asking to get raided.

My question is, what do you do with the employees after one of these joints get raided? You can’t send them back to North Korea can you? That’s kind of cruel in and of itself. It’s not like these women have any other talents, so they can’t get another job at a place that isn’t a rub n’ tug. I’m pretty sure none of them are licensed masseuses. They can’t speak English. They’ve never actually experienced America because they live in these places. They can’t drive or take care of themselves. So…..now what? Oh well, looks like men in Northampton, Agawam, Hadley, Framingham, and East Longmeadow are gonna have to do the unthinkable – have sex with their wives.