On Jimmy Kimmel the other night he had a bunch of celebrities come on and do a bit where they read tweets that people have written about them. This is becoming like a thing now. Some of them are actually pretty funny too….

Let’s be honest, does anyone think that Ashton Kutcher SHOULDN’T get hit by a bus ASAP? Does anyone actually LIKE to hear Sophia Vergara speak? They crossed the line by insulting Gary Oldman though. Most underrated actor in hollywood and the one of the very few who is not a complete asshat.

Anyway these celebs can’t feel too bad. The internet was created so anonymous people can have a place to say really offensive shit. Today is the six month anniversary of the founding of TurtleBoy Sports. In light of that I give you the Top 12 Most Vicious Tweets/Comments Directed At TurtleBoy Sports.

12. The time someone pretended to be a lawyer for Pomona College and did a really good job at it. 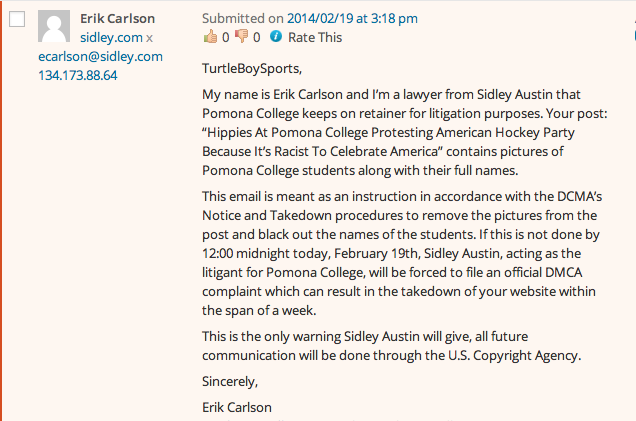 The real Erik Carlson came across this two days later and asked me to take it down. Nevertheless, A+ for effort for whoever this poster was.

11. Jonny Gomes is a popular player around here. We hate him at TurtleBoy Sports though. This causes some people to dislike us.

If I had a nickel for every time someone called me that magical “f” word, I’d be a rich man.

Because disliking Quebecers is “racist.” After all, Quebec is a racial group of human beings, not a french speaking provence of Canada.

9. That time Jon Gugala trolled the comments of TurtleBoy Sports after we publicly exposed his really shitty article on Boston Marathon bandits.

When the bandit blogs were coming out it brought out a lot of tensions because I rightfully ripped apart Kara Bonneau for being a carpetbagger from North Carolina who thinks she owns the Boston Marathon. Her supporters weren’t fond of this. Also, they think identifying junior smoke shows is “misogynistic.” Because you can’t point out when women are attractive without being sexist.

7. The Margee Pesikov blog set people off like never before. I picked up a solid five or six FULL TIME trolls since that blog. This guy is easily my #1 stalker…

When TurtleBoy Sports is taken down by the FBI and CIA, this guy will be at my trial to testify against me for sure.

5. The time we blogged about a young Tennessee basketball fan who made fun of the sexual prowess of all UMass students and alumni, and we wondered whether or not he was a 12 year old boy or a short haired woman.

Cobe Walls is a 14 year old boy. He also has a potty mouth. That settles that mystery.

4. Feminists troll the crap out of me on Twitter. I usually just ask them out when they do.

Someday I will find a girl who will ride my magical turtle. Someday.

3. The thing about the Margee Pesikov blog is that somehow a lot of commenters thought I was being the asshole. Ummmm, did I make a youtube video with my name on it that made fun of disabled people? Yea, let’s not forget that Margee is the REAL victim for voluntarily putting this video on the internet before realizing she just made the dumbest mistake of her life.

Just so much to respect about this angry St. Bonaventure fan. The email address, “HEisfartboy6969@gmail.com” is pure genius. Well played.

1. The best is still this classic in my opinion. St. Bonaventure fans hate me like none other. They would rip me off my magical turtle and hang me from the nearest poplar tree if I even went near Buffalo…..I mean, Olean. This comment had it all.

Just so much genuine passionate hate out of this comment. Butthurt, soulless twat, blow-up dolls, self-inflicted wounds, wishing I was blown up by the Tsarnaevs. This was the perfect storm of hate.

Here were some other good ones:

So don’t feel bad celebrities. They hate us because they ain’t us. I can’t wait to see what they’re saying about us by Christmas as the TurtleBoy Sports revolution picks up steam and starts offending people from all over the Globe.

Feel free to share you hateful, dirty thoughts in the comments.