This is Sophie Lovett: Sophie wanted to make it crystal clear in a series of Facebook posts that the White Rose Coffeehouse will NOT be participating in the “Coffee with a cop” initiative that has been going on around the country as part of a black lives matter push to improve relations between the police and the community: Oh look, another entitled white woman speaking on behalf of people of color who never asked her to speak for them. We shouldn’t humanize the cops? Are they not human now?

It looks like she’s speaking to a cop here based on the context of the conversation: So she’ll accept money from cops so long as they leave immediately afterwards and don’t drink their coffee in the establishment. Smart business move right there.

According to her all cops are slave catchers as well as killers, and she’d much rather have her customers of color feel safe, which obviously they cannot do if the police are in the coffeehouse If you see a cop in a business that you’re in and you feel LESS safe because of it, then you’re a fucking idiot. There’s no other way around it. But the truth is that no one actually feels that way. It’s just another white woman telling people of color that they should be afraid of cops because she read an article on the Huffington Post during her morning dump.

She’s also an anarchist who doesn’t believe in law and order: Can the Lynn Police do us all a favor and just take a day off from work? I could really go for some free coffee at the White Rose. And while I’m there I’ll probably help myself to the cash register too. It’s not like these people believe in guns either so it’s basically a free lunch. Graciously accepted.

And just for the record, she won’t host a coffee with a cop event, but she’ll gladly hold a “meet an ex-con” event: I’d ask if this chick is banging Kevin Lynch, but I think we all know that’s out of the question.

They were quickly flooded with one star reviews on their Facebook page, which led to this response: Translation – we are taking no actions against the manager because she is a “young person acting out of emotion.” This is OK because it’s “not uncommon among young people.”

Newsflash – this wasn’t her acting on emotion. These are her actual beliefs. And she made it crystal clear on Facebook that your business does not welcome the police who protect your business from thieves and those who would do you wrong. “Our business has received a lot of flack for my personal statements and for that I am deeply regretful.”

No apology to the police for spitting in their face and calling them murderers. Just an apology to her mother for the inconvenience the dumb things she wrote on Facebook have done to Mom’s business.

Funny that Mom says she wants to “talk about things” yet all these comments have been deleted: Whatever you do, DO NOT leave your thoughts on their business page just to see how long it takes for your comment to be deleted. That would be bad.

If you think Mom doesn’t harbor the same opinions that her daughter does then just check out the rest of their page: Virtue signaling like you read about!! Just so we’re clear, Nazis are NOT allowed in their business. This is a pretty brave stance they’re taking too. Especially considering the high concentration of Nazis in Lynn and the general acceptance most of us have for Nazis. If you don’t have one of those signs in your storefront I automatically assume you’re a Nazi haven. 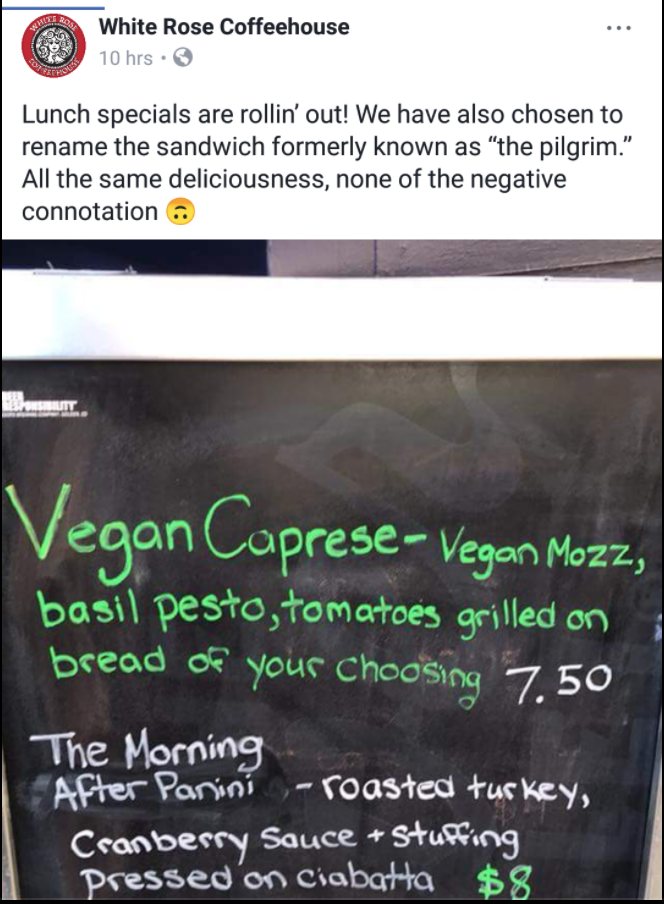 Yup, they renamed the Pilgrim sandwich because it’s offensive. Ya got that? The Pilgrims, who were a bunch of peaceful refugees fleeing religious persecution in England, and broke bread with Natives, are now racist too. It puts the Pilgrims somewhere between Dr. Seuss and Hitler on the offensive meter. This is how fucking stupid these people are. Their understanding of history is so limited that they instinctively believe that any white guy who ended up on this continent was in on the genocide.

Oh, and Mom fell for this one too: Hey Mom, we debunked that one a few weeks back.

For a progressive coffee shop they sure seem to have an interesting track record with employees though…. Anyone, fuck this place. How stupid can you be to own a business and go out of your way to be so incendiary? Do these people not understand how much everyone rejects and despises their bullshit? Not just conservatives either. The vast majority of liberals think this is coo-coo for Coco Puffs too. Everyone with a brain knows that cops are a good thing, just like coffee with a cop and high five Friday are. But this radical fringe on the left insists on bringing the rest of the group down with them, which in turn results in this: