We Finally Got The Audio Of Dog Murdering, Woman Beating Maggot Rian Waters Promising To Kill Himself In Court After Losing His Criminal Complaint Hearing And It’s So Satisfying Back in December Rian Waters, the woman beating, dog murdering piece of human garbage who sued me for libel and lost over a year ago but still hasn’t let it go, brought me to Hampden District Court in Springfield after filing a criminal complaint against me for witness intimidation. In September of 2019 he tried to file a criminal complaint against me for something else in the same court and lost. At that court date I saw Rian in the hallway and when he attempted to speak to me I called him a dog murdering, woman beating piece of shit because that’s exactly what he is. He claims this was witness intimidation, but in reality he’s just abusing the court system to harass me because he has nothing better to do. He brought lunatic Amanda Sawyer with him all the way from Rhode Island in a snowstorm, because she wanted to pick his brain. He asked the clerk magistrate to allow her inside but was denied. However, the clerk did tape the court proceedings and I finally got them this week. Enjoy.

The best part is that he wanted it taped because he wanted to prove that it wasn’t frivolous, and then proceeded to do exactly that.

“He misrepresented details to make it look like I was filing frivolous complaints against him and I wanted the public to know that it’s not frivolous.”

I urge you to listen to that tape if you wanna hear what a day in the life of Turtleboy is like. This man is a lunatic. He corrected the clerk multiple times because he thinks he’s smarter than everyone. This is a violent criminal who is allowed to waste the taxpayer’s time and money harassing someone who has committed no crimes. He played the tapes from a live show in there to prove how horrible I am, but it ended up being some of my greatest hits.

He claims that the witness intimidation is when I said that if he continues to harass me with these ridiculous complaints then I would continue to expose him, thus intimidating him from pursuing justice. Yet he pursued it anyway and constantly shows up on our Facebook page and comments.

Rian: “I was intimidated by him. I told her (the previous clerk) that I needed a few minutes to compose myself. That’s the effect that it had on me. He he goes ‘who’s your doctor?’ And at the time I couldn’t think of anything. I couldn’t even think of the place I go for therapy. And that was the effect of the witness intimidation. And there were multiple times while I was arguing where I would forget what I was saying. It was directly related to the harassment and was the reason I was so forgetful.”

Clerk: “Did he make any overt suggestion that you better drop this case?”

Rian: “He said ‘you built the perfect case for me to file a criminal complaint for malicious prosecution. After that I’ll be filing and receiving a restraining order, and then I’ll be coordinating with the Hampden County DA’s office to reopen your domestic violence dog murdering case. You will be in jail where criminals like you belong or you can walk away and take the L. Your call.’ I understood that as if I dropped this criminal complaint then he was not going to be working with the DA’s office, he would not be filing for a restraining order, and he would not be filing a criminal complaint for malicious prosecution. To me it was like, he was gonna do all that or I was gonna drop this hearing. That’s pretty direct if you ask me.”

Clerk: “Why did you wait 2 months to file this criminal complaint?”

Rian: “I didn’t want to be in the same room with him unless I had to be.”

Around the 24:00 mark he starts explaining why the judge who ruled against him in the civil suit was wrong, because he’s smarter than her, and then he explained at the 26 minute mark why he waited so long to file the second criminal complaint.

“The judge said that there was solid evidence that he did do witness intimidation and she said that she could not look at it. I told her that the Palmer Police lied and did a bunch of corruption towards me so she told me to go to the State Police. I went to the State Police and then I went to the East Longmeadow and Springfield Police. The State Police told me to file a private complaint. They told me I had plenty of evidence and they recognize that he has a close relationship with the police which makes it really tough working with them. So the State Police expected that none of the other police were going to help me. So I initially filed in Palmer but they didn’t follow any of the procedures. They didn’t even let me, they said I was unable to do whole evidence, they were just extremely rude. They said it would take 6 weeks to issue a hearing date, which I think was just to waste time. So that was the actual as I was waiting for 6 weeks for the time to expel, so that’s the reason why the criminal got pushed back. So it wasn’t that I was waiting for the case to end and then I filed a criminal complaint. I was doing what I could to be fairly heard.”

The Palmer Police “did a bunch of corruption towards me.” And he’s working with the MSP, who totally took him seriously.

Then the clerk broke his heart.

“I don’t find that calling someone a bitch boy, dog killing woman beater piece of s-h-i-t was in any way to intimidate you from going forward with your complaining. I do not find that you are intimidated Mr Waters, you just don’t like the things Mr. Kearney says about you. It doesn’t meet the elements of intimidation of a witness. He called you names. Calling you names is not a criminal offense.”

Clerk: “He called you names in the hallway. If we had criminal complaints every time that happens….”

Me: “He’s going to do it again, what happens then?”

And then finally once he realized he had lost he announced that he was gonna do the world a favor and kill himself, and you can hear him kick the chair on his way out.

“I can’t work because of him. So the thing is, yea, no I’m gonna commit suicide in 2 months if I don’t figure out something. I’m going to get a redecision started.” (kicks chair)

And for the first time I actually saw in person what this 140 pound homeless man gets like when he’s angry, and I could picture what he did to Samantha Cardin and her dog. I also have the vet reports, which I’ve included at the bottom of this blog.

Rian is still appealing the decision against him in the civil matter, which requires me to retain counsel, so I thank you everyone who has donated to help us defend our voice, which allows animals like Rian Waters to be exposed. 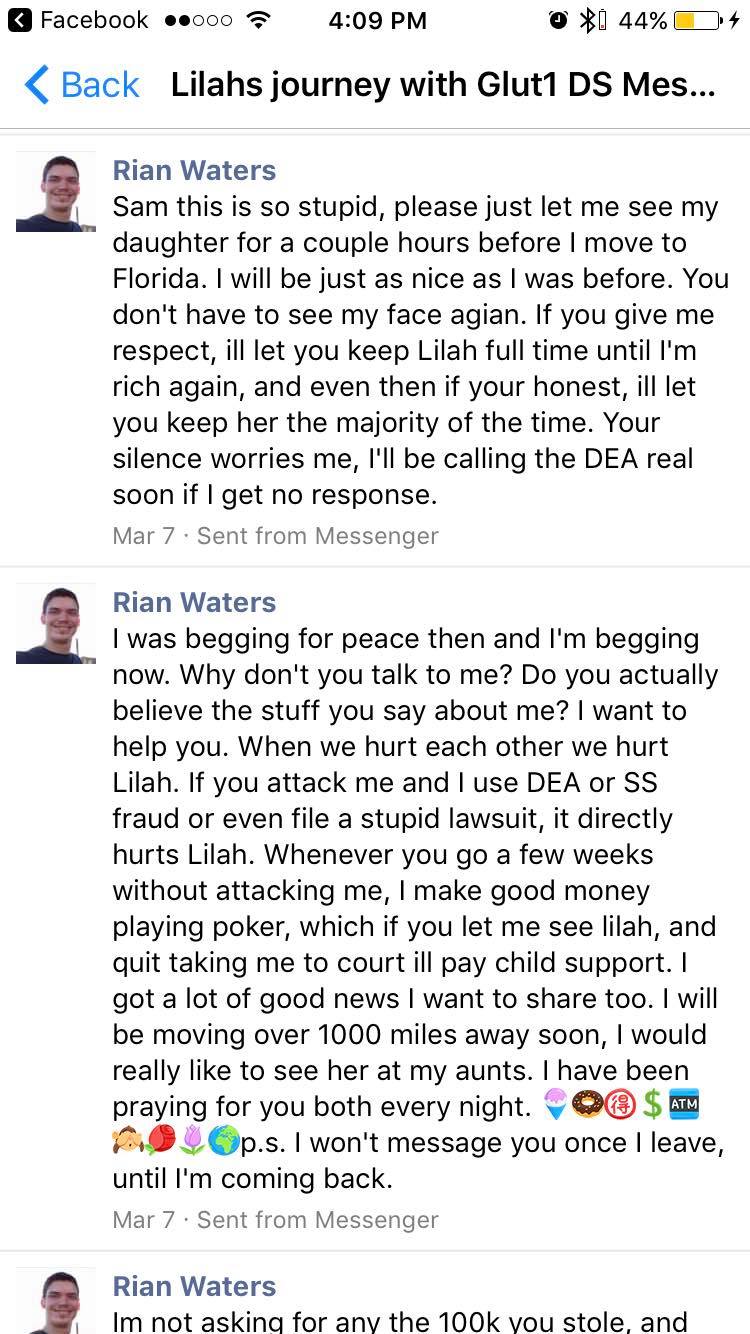