I’m running for Wachusett Regional School Committee on May 10. In our district there are 22 seats, 10 of which are from Holden since we’re the big town. Every year 3 or 4 of the seats are up for election, and this year 2 of the 3 incumbents are running. I’m running for a number of reasons, but a big one is that the woman running for re-election, Asima Silva, supports critical race theory and is completely ignorant about COVID. At one meeting she cried on command, claiming that her uncle died from COVID that day, and she was just leaving the cemetery as somehow he was also buried on the day he died. The video won’t embed but you can hear it at the 44 minute mark here.

This woman is the reason my kids haven’t been able to go to school, and she’s clearly a liar who relies on theatrics and fear mongering because she can’t make a coherent point.

A month later when schools were about to reopen she once again made her pitch for them to stay closed by spreading a baseless lie that 10,000 kids have died from COVID in Massachusetts. After being corrected that those were cases she said that it was still too many because kids “struggling to breathe,” at the 1:56 mark.

This is why I’m running – because kids in these towns deserve better than this. They were forced to stay home and lose out on a quality education because this person was in charge of opening the schools. Unacceptable.

Anyway, the word is out that I’m on the ballot, and there are 6 of us, including 4 challengers. Evidently one man is not happy about this and he has paid for fliers smearing me to be sent all over Holden: As you can see these fliers were sent out and paid for by Florida resident and disgraced Worcester City Councillor Michael Gaffney. I have chosen not to mention or mock him lately because he is clearly mentally ill and needs help. This is further proof of that, and I hope his wife Coreen helps him seek appropriate medical care. You may recall that he also sent out fliers to the entire town of Holden two years ago in an attempt to damage my family, but failed miserably. Those fliers did not have his name on them, so perhaps he’s upset I’m no longer giving him attention. Either way, they contain the same quotes as the first round of fliers. I won’t even bother refuting the ridiculous claims on these fliers because we all know they’re not true, and if anything these are just free advertising. One of the blogs cited about me leaving Shepherd Hill with a police escort was because I was being threatened. Very scandalous, for sure. Unlike the man who sent this blog I have children of my own, we get along quite well, and I’m running to make the schools better for them, so the claim that I shouldn’t be around children doesn’t hold water.

He’s not the only one who’s mad though. This is school teacher Angie Marilyn. She appeared in a blog in 2018 after smearing a pizza place over satirical bathroom signs that referenced Bruce Jenner. 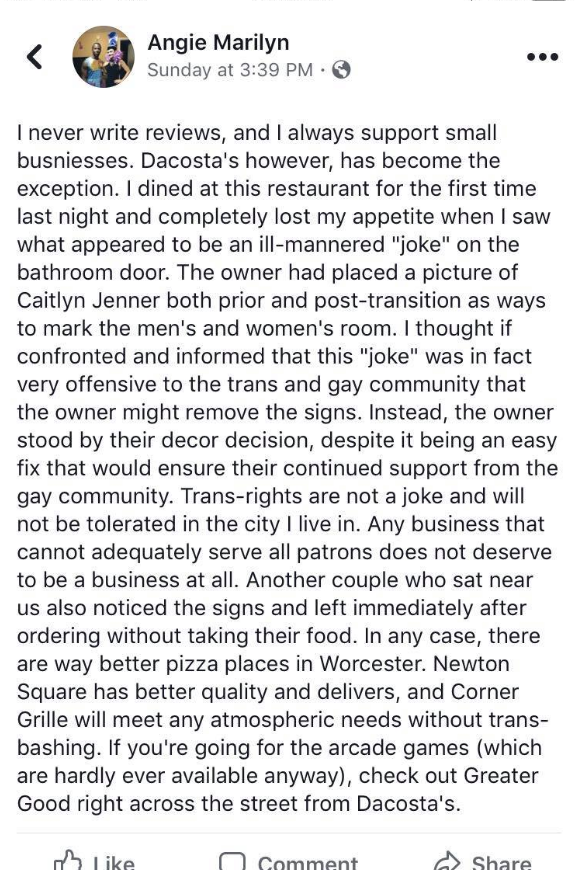 She appeared again in a blog last year when she was leading “rent strikers” in attacking landlords who wanted to get paid rent even though a virus existed. In both cases she used her platform to try to harm innocent people trying to pay their bills, so I did what I always do – defend victims of online harassment and expose the people hurting them. Angie is really upset about that and made up a ridiculous story about how she almost got kidnapped due to the blog, which she believes disqualifies me from serving on the School Committee.

Yea, she literally just made all that up. No one threatened to rape and murder her, no one tried abducting her into their car, I was never fired, I certainly never had improper relations with any students, I never called for the rape of a kindergarten teacher, and I definitely should be allowed around kids. My kids agree.

The best part is that she urged people to contact current members of the board, 12 of which do not live in Holden, and two of which I am running against. As if they have the ability to stop me from participating in the democratic process. I’ve said it before and I’ll say it again – the easiest part about what I do the level of stupidity I’m up against.

I guess Asima Silva wrote back to her though. Which makes sense. This is the kind of person who would vote for her, if she lived in Holden. Hey Ken Farrell, I’m just here fighting for what’s best for the children of the Wachusett Regional School District. I’m not a scourge, and I’m allowed to run because that’s how democracy works. Perhaps you should be worried with eradicating the blatant racism you harbor on your own Facebook page before casting judgment on others. This is one of the women I’m up against, who apparently is not a fan either. Guess I won’t be getting their votes.

This woman apparently didn’t want to go back to school until Dr. Fauci said we could. Anyone who’s incapable of analyzing data and making a judgement call on their own, rather than waiting to do what Dr. Fauci tells them to do, is unfit to serve on any school committee.

I’m choosing not to focus on any of that though, and instead I’m here to tell you what I will do once I’m elected on May 10. My platform is (I also posted it on my candidate Facebook page, which you can like by clicking here, but I will only be sharing information related to my campaign on there and any non-related discussion will be blocked): 5. Audit school spending, particularly administration, in order to cut unnecessary positions, free up money for spending on students, and avoid an override. A man named Brendan Keenan, who is good friends with the superintendent, was hired to be the COVID coordinator, except they never held any meetings and there was no plan to reopen. He sent out a survey, in which the vast majority of parents said they wanted to reopen schools in September, and he ignored the results. Instead he was sharing misinformation about COVID on Facebook. Trim the fat and use the savings on things that directly help kids learn. That’s my goal, and I appreciate your vote on May 10 if you live in Holden.