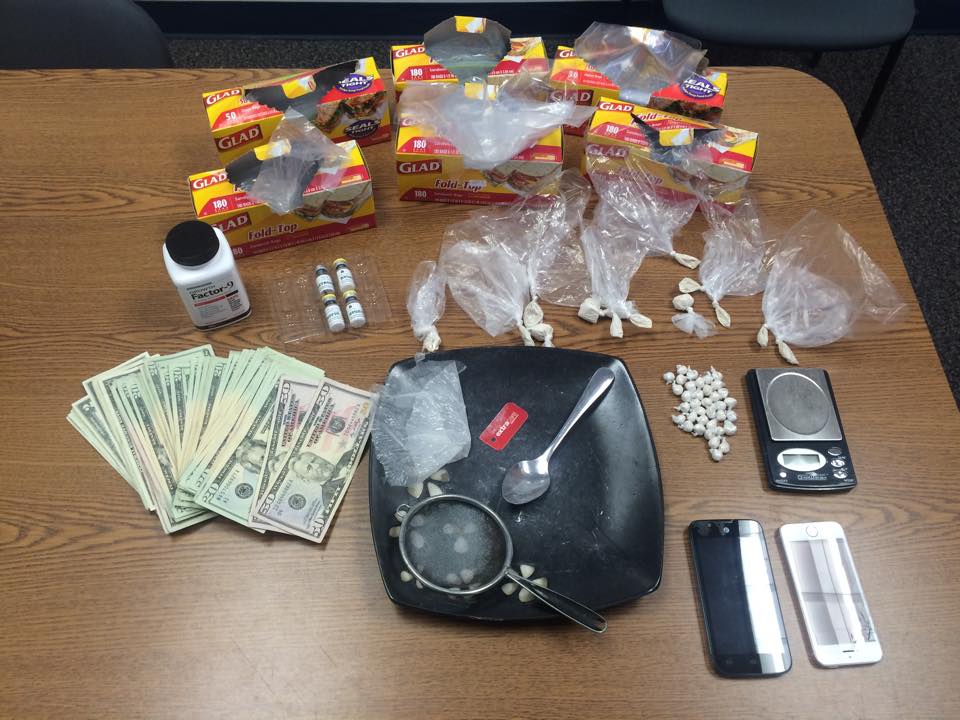 Saw this gem on the Southbridge Police Department Facebook page: On Thursday March 5, 2015 at approximately 0841 hours, Detectives from the Southbridge Police Department along with members from South Worcester County Counter Crime and Drug Task Force and DEA executed a narcotics search warrant at 164 Worcester Street 2nd floor. The targets of the warrant was Cruz “Flako” FUENTES (DOB 12/2/87) and Alba GARCIA (DOB 6/9/83).

As a result of the search warrant of 164 Worcester Street 2nd floor apartment, over 36 grams of Heroin, Steroids, a large amount of US currency, packaging materials, cuff lists, cut corner bags, cell phones and a digital scale were seized. While on scene Detectives observed that the apartment entrances/exits were fortified to prevent entry by police. FUENTES and GARCIA also had several surveillance cameras on the inside and on the outside of the property.

As a result of the property seized Detectives observations and information of this ongoing investigation, FUENTES and GARCIA are charged with Trafficking in Class A- Heroin over 36 grams approximately 50 individual packaged plastic bags of heroin, Conspiracy to violate the drug law. FUENTES was also charged with Possession of Class C (Hygetropin). The couple had 6 children living in the home that were subsequently placed in the custody of the Massachusetts Department of Children and Families. The couple already have an an open case that is pending thru the courts for another SPD drug raid that occurred in 2013 resulting in similar charges. All-Star parenting out of the Bridge. It is SHOCKING that parents like this are living in Southbridge. Shocking.

So let me get this straight. The house was raided by police in 2013 and they were arrested and charged with selling heroin. And somehow, through the brilliance that is the Massachusetts court system, they were allowed to not only maintain their lucrative business, but also do so while raising SIX FREAKING CHILDREN!!!???

These are images of the neighborhood the criminals lived in:

Whenever the satellite dishes outnumber the high school diplomas you know you’re in a dump. I don’t understand how towns like Southbridge get this way. I really don’t. It’s like one gigantic Belmont Hill. The only difference is they have a Big Bunny Super Market: The whole purpose of living in the burbs is you’re supposed to be getting AWAY from this shit. The cons are of course that there isn’t shit to do and everything is a 45 minute car ride away. So what’s the point of living in the boonies AND being so close to to so many shitty people? Like, I can understand living on Eastern Ave. At least then you’re close to shit. But Southbridge – I don’t get the whole Southbridge thing.

Regardless, these people are the scum of the earth. They sell a product that ruins people’s lives. Normal people don’t buy heroin. Desperate people do. Instead of helping these people get treatment, these nudniks take what little money they have and give them more of the shit that is slowly killing them.

Oh yea, and I’m gonna go out on a limb and guess that you and I have paid for most of their children’s upbringing with our tax dollars. Because what are the odds a single unemployed mother of six wasn’t on some form of government assistance?

At the very least I think we can all agree that these people should NEVER be allowed to see their children ever again, right? Oh wait, you mean there’s actually people DEFENDING these lovely savages? (Clive, I know you’re reading this and I DARE YOU to tell me that these animals are not savages.)

Yup. Money is money. Who gives a shit if you made that money while peddling a substance that is designed to kill you slowly over time while you profit? That’s a normal job. And I’m SURE she’s paying taxes and reporting that income as well. Because after all, that’s what you do when you have a “job.” You pay taxes on your earnings.

Is your real name Sunshine? If so that explains a lot. Because you’re right – some people do deserve a second chance. These two geniuses are not amongst those people. But yea, they actually DID get a second chance. Remember? They were arrested for the same thing in 2013. But please, tell me how second chances work out so well for people.

She does make a good point though. We all make mistakes. Some of us forget to pick up milk on the way home from work. Others sell heroin in an apartment in Southbridge with their six kids.

Oh yea, I love the “only god can judge” line. It basically eliminates the possibility of anyone ever going to jail for anything. Unless God himself is your judge in Dudley District Court you’re pretty much gonna get off scott-free.

Oh, so now she’s a “great mom.” Gotcha. Because a bad mom wouldn’t sell drugs if she was in a bind. And clearly in America the only way to make money is to sell drugs. There are literally no other options.

Good point Dotti. The only reason one could suspect government assistance is because the defendant is hispanic. It has nothing to do with the fact that she’s a single, unemployed mother with six dependent children. Does Big Bunny take EBT anyway? Definitely racism.

The bottom line is that, a) DCF has to start taking kids away from savages like this immediately without second chances, and b) they both need to go to jail for a long, long time and should never see their kids again. I dare you to say otherwise Clive.