Dear Bridget Phetasy: This Numbnuts Keeps Telling People That You Are Me, And I’m Very Sorry. I hope this blog finds you well. Actually, I really hope that it finds you at all, because you’re a famous media personality and I am a completely irrelevant 30-something year old blogger from Massachusetts, with poor metabolism and no requests for interviews sitting in my inbox. Even with these rather marked and self-evident differences, there has been a rumor circulating around the Brockton Hub that you, in fact, are me. I don’t know how, or why this happened. Despite the fact that we both have vaginas, and enjoy writing words for people to read, I am definitively not you, Bridget Phetasy. I know this, and you know this. I’m not sure why the crazy broad pictured above doesn’t know this. But she’s really selling it.

Anyway, due to this unfortunate, albeit hilarious miscue, I feel I owe you an apology. Several, actually. I would like to start by pointing out that when this was first brought to my attention, I did indeed attempt to correct the situation. However, my efforts fell on deaf ears, and thus were swiftly and sharply rebuked. So I just started to play along.

I couldn’t not. I hope you can understand that.

Now that you are presumed to be me, or I you (however this works), you might find yourself attached to some of my online exploits and misdeeds. You might feel your honor and good reputation have been soiled. I get it, I really do. Please, allow me to apologize, in full detail. It’s the least I can do.

First I’d like to apologize for the obvious physical differences between the two of us – I can completely understand if you are insulted by the insinuation that I am your doppelganger. You are a certified smokeshow with a rockin’ bod. Obviously. 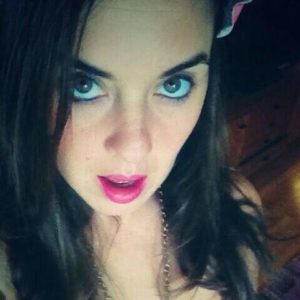 I, on the other hand, look like I mainlined bacon grease for breakfast. I apologize. As much as I truly hate the fupa that crept on me soon after I hit the dirty thirty, I love carbohydrates more. I’d like to say I would be willing to change this now that we are interchangeable online, but that would be a lie. I don’t want to lie to you, Bridget.

I honestly don’t even see the resemblance. I tried to recreate the adorable scowling photo you took that is now being passed off as me, but unfortunately, when I try it, I just look awkwardly confused and sort of like I just sniffed a turd. There’s clearly no resemblance here. Don’t take it personally. Bitches be crazy sometimes.

I apologize if you find yourself receiving angry messages from disgruntled ultra-conservative Christians condemning you to eternal damnation, and/or accusing you of being a Satanic witch. You see, I was recently added to a group of 500,000 people called “PrayerWorks”, comprised mainly of West African pastors and Midwestern grandparents who don’t fully understand how the internet works.

As an atheist and enthusiastic internet troll, I could not resist the urge to rile them all up and revel in the reactions. I’m sorry.

I hope, more for your sake than my own, that Jesus Christ has been too busy to check Facebook the past few days. If not, and you do end up with your eternal soul burning in Hellfire until the end of days for my offensive memebombs, please know, I am truly remorseful.

I apologize if you find yourself the recipient of upset and angry individuals questioning you on your desire to buy gently used living room furniture from their completely non-couch auction related Facebook live videos. I can’t really get into it per the first and only rule of couch club, and you probably don’t care anyway. But nonetheless, I am truly sorry for any inconvenience this may cause you. I apologize for any animosity you may now draw from convicted rapist, failed Scituate town Selectman candidate and former NHL player Billy “The Kid” Tibbetts. He was too much of a fahkin’ legend to simply pass by without writing about. In the same vein, I apologize if “Donnie Does” of Barstool Sports is upset with you for speaking ill of his pet duck.

I have since retracted my derogatory statements regarding the duck, if that helps any.

I apologize if alt-right conspiracy theorist Dianna Ploss accuses you of being a radical feminist sent here by ISIS to enslave all of America under Sharia Law. I couldn’t help but call her out on her bullshit because she is insane, and a black mark against rational conservative Americans. Look her up – you’ll understand why I did it. Conversely, I apologize for any hatred and vitriol you receive from the far left, particularly the feminists. I have unofficially been dubbed the “enemy of all women”, a title that I have appropriated into a badge of honor of sorts, because third wave feminists are (generally speaking) insane, and I’m just not a huge fan of playing outrage adjective mad libs. Also, I refuse to accept “fart rape” as a thing.

I apologize if New York Post Writer Chris Perez now thinks that you are a racist. I’m sure you are not, and I promise you, neither am I. I just told the truth about Franklin Baxley. I apologize if any fupasloths, gutterslugs, welfare sludgepumps, career criminals, drug dealers, junkies, or Flat Earthers wish death upon you and your family. Trust me when I say, though, you get used to it pretty quickly.

Lastly, Bridget, I wholeheartedly apologize for the accusations of “hatred, racism, and terrorism”.

It figures the same sort of stupid loon who staunchly believes that I am media personality Bridget Phetsay would also throw terrorism allegations up there. Sorry about that. We attract a certain brand of naysayer, i.g.: The crazy kind.

If it offers any solace, and I’m sure it doesn’t, this has taught me a valuable lesson in internet propriety. You just never know when you’ll wake up and find that a well known and well liked comedienne, writer and former Playboy sex columnist will have suddenly assumed your online identity through erroneous public assertion. And then, just like that, you’re forced to reckon with your own actions and how they could potentially affect another human being’s reputation. And you, Bridget….well, you’re a much better human being than I. With much better hair, too.