A lot of people have been contacting us about the story out of Freetown involving Albert Sardinha , one of “The Portuguese Kids,” which apparently is a popular Youtube comedy act with hundreds of thousands of followers that I’ve somehow never heard of before. They basically do corny parody videos from the perspective of second generation Port-a-geez mocking their old school Port-a-geez first generation parents who never bothered assimilating to American culture after jumping on the Azores expressway that always ends in Fall River. Ya know, stuff like, “Durr…..I don’t get American culture….durr…..we don’t need to buy clothes when we can make them at home…durr….Coronavirus comes from drinking Coronas.” It’s basically the shit I make fun of the Port-a-geez for except they don’t get called racist like I do because they are Port-a-geez.

Anyway, Fap Albert was arrested two weeks ago in one of the creepiest ways possible. Here’s the really grainy text message he sent her that was included in the police report, that makes him sound like a salty poon. “I had wanted to give you a note I had written what I was trying to say to you. It was clear to me in the last week or so that you wanted to avoid things with me and that you were looking to unfriend me.”

Translation – I know you wanted nothing to do with me, and you made that very, very obvious, but I wasn’t done with you and I get to have the last say. So here’s my stupid note, which I naively assume will somehow get you to realize that you actually fucked up badly by ignoring a man who is 16 years older than you.

“I didn’t want to contact you because I felt like it would’ve just prompted you to ignore it.”

Translation – You keep blocking me so I’m just gonna show up at your house with a note instead, rather than take a hint and move on.

“I just wanna say a piece of my feeling and leave you alone.”

There is a 0.0% chance he planned on leaving her alone after the note. Guys like this think that life is a Disney movie, and that she would be so moved by his passionate letter that she’d run back into his arms.

“It sucked feeling built up for no reason. It hurt.”

Translation – This is mostly your fault.

“My intention was apologize for my end and say I didn’t have hard feelings towards you for leading me on and not being up front about what things were between us.”

Translation – I’m a better person than you are, because even though you’re a cunt for leading me on, I can still find it in my heart not to hate you.

“I had thought maybe in time we could be friends. That’s what my note was about.”

What kind of psychopath wants to be friends with a woman who is 16 year younger than him, who he went on ONE FUCKING DATE with??!!

Oh, and there was no push-push either. How the hell could you be this attached to a woman who you haven’t taken to poundtown?

He claims he dindu nuffin in an interview with the Standard Times. “We were working on closure.”

No mother fucker, YOU were working on closure. Any dude who says he needs closure after one date with no push-push is by definition a psychopath.

The intent was indeed to have a conversation, but the problem with that is that she made it clear she didn’t wanna have a conversation which is why she blocked you on social media. Take the L and move onto the next one. Seriously, act like you’ve been there before

And what belongings of hers could he possibly have? He went on ONE FREAKING DATE!!

After speaking with a source who has been in that building I can say with 100% that there is no “common area” of this building. Plus, the woman downstairs heard him up there at 9 AM when she was at work. If that’s his defense then and the witness testifies in court that she heard footsteps up there at 9 AM, then he needs a new defense.

Oh, and if it was really innocent then why would he run away, and why would she feel the need to cover for herself by taking pictures of him?

But one thing I learned with Juicy Jasiel Correia is, Port-a-geez people assume that other Port-a-geez people are incapable of committing crimes. It doesn’t matter how much evidence is out there against a person, if they’re Port-a-geez then by definition they dindu nuffin. Check out all this victim blaming . 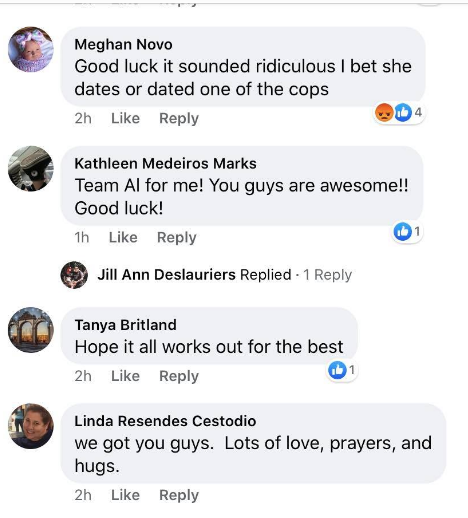 Medeiros, Ramalho, Gouveia, Silva. Gee whiz, I wonder who those guys root for in the World Cup?

Other women commented that he’d done the same to them too. Almost as if it’s a pattern.

The Portuguese Kids have released a statement on Facebook announcing that he’s on leave for a while until he can prove his innocence in court. Translation – we think she’s lying and have Fap Albert’s back.

Except she’s got messages, video, pictures, other women with similar stories, and witnesses, and he’s got a story about an imaginary common area. She’s also a well-respected mother who works for a law firm, so good luck in court fuckhead.