Pro tip – if you choose to go day drinking and driving with your crotch fruit in the backseat and you cause a three car accident and get publicly shamed on WINY Radio Facebook page WITHOUT a mugshot, then count your blessings. Because they always throw mugshots up there and then you become the biggest joke and instant Turtleboy fodder. But apparently Tara Rankin from Putnam didn’t get that memo. 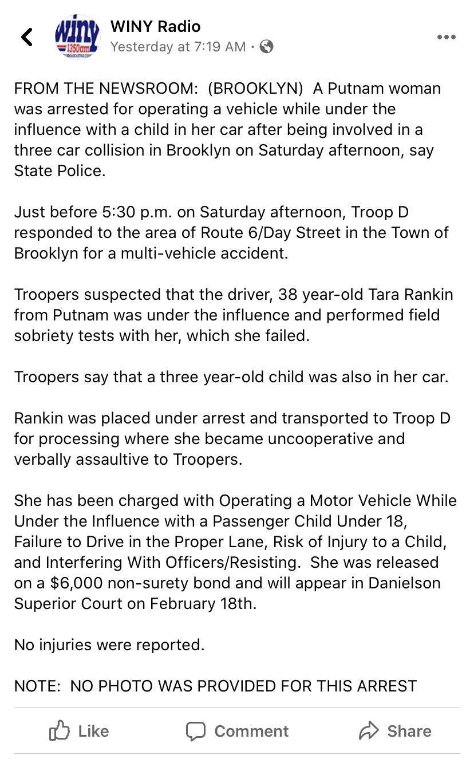 Because although she got lucky and didn’t have a mugshot, she decided to make her presence know in the comments and go full dindu nuffin. “The first to judge are just as at fault.”

No. Just no. Judging you for being a shitty Mom doesn’t make me equally as at fault as you are when you drive drunk during the day and crash into shit with the poon polyp in tow.

She also shared that her pa dukes was killed by a drunk driver, which somehow makes her drunk driving OK. No one cares that you work two jobs or consider yourself a “fantastic mother.” You get drunk and crash into shit with your kids in the car. Judgement rendered.

Turns out she was lying about it not being a three car accident too. We found that out when someone whose daughter she crashed into showed up on the page to call her out on her bullshit. “Already talked to my insurance…it was not my fault seeing she was trying to pass a moving car on the right.”

Bitch, you were drunk. I assure you it was 100% your fault and will be viewed that way by the cops and your insurance company. But keep pushing that narrative and see where it leads ya.

She kept showing pictures of her car too, like it proved something. We get it, your car went from a Putnam 8 to a Putnam 6, but it’s still drivable. It doesn’t change the fact that you were drunk and verbally assaultive to the cops.

But hey, keep working on those Snapface filters and telling yourself you’re a good Mom after crashing into a car with your child in the backseat while under the influence during the middle of the day.