If after the poke and choke she won’t smoke, maybe it’s time to call in the police folk.

SOURCE:  “James P. Vaillancourt, the man charged with murder in connection with the death of a 42-year-old woman whose body was found partially nude, had a strangulation fetish, according to the Turtlegram.

According to Leicester police documents on file in court, the body of victim Corrinna L. Santiago was found nude from the waist up, the Telegram reported. She had a necktie tied tightly around her neck.

Santiago’s body was discovered July 9 inside 69 Walnut St. in Leominster, according to the office of Worcester County District Attorney Joseph Early Jr.

While interviewing one of Vaillancourt’s ex-girlfriends, investigators learned that Vailliancourt had strangled her and other women during sex, according to the Telegram.

“Mr. Vaillancourt had a fetish for strangling females during sexual intercourse,” court documents read, according to the newspaper.

The ex-girlfriend told officers that the last time she had sex with Vaillancourt, he “strangled her to the point she had to hit him to get him to stop.” 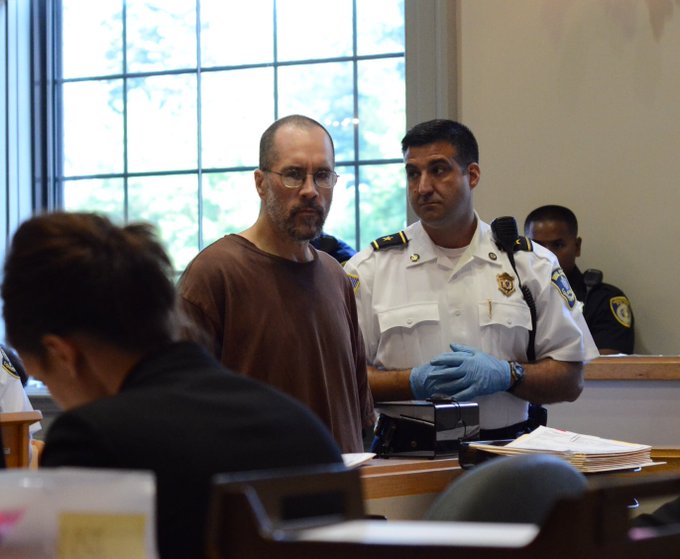 Wowza. Listen, I know we all have our little kinks that get the juices flowing – there’s really nothing better than a well-placed bite from Mr. NSTB – but once it gets to the point where people need to give you a good ol’ nutpercut to get you to knock it off, it might be time to reevaluate shit… and maybe go back to the vanilla zone for awhile, like strangle wanking while workin’ the gherkin. Meet James Vaillancourt. He’s from New Bedford, and that should really explain everything. He was a 10+-year veteran sanitational engineer, a poo baron, if you will, at Lunenburg Middle & High Schools… …who had an affinity for taking selfies in various classrooms throughout the school he was charged with defilthifying.

If you notice in the comments on this particular picture, the woman he killed, Corrinna, is letting him know just how yummy she finds him (gag.) These comments and others date way back into 2014, so it seems they had been carrying on this asphyxifucking situation for awhile now.

His friends also seem uncomfortable with this dude roaming the hallways of a Jr./Sr. high, even if it appears to be in jest. There’s truth in humor, turtles. “Look up to no good!” “Sinister!!” – yep, both are spot on. Look at that creepy/sly messosexual visage hanging out in the school gym and tell me you wouldn’t expect this guy to reverse Beverly Hills necktie a bitch someday. You can’t. His face just screams it.

Again, not that there’s anything inherently wrong with a good ol’ fashioned chokepoke every now and then. But when you see yourself escalating, when previous partners have had to bitchslap you to get you to stop… you know there’s a problem. At that point, you have a moral responsibility to do something before it escalates and you end up with a topless dead chick in your bed for a few days before turning yourself in. Nah fam, he didn’t. He knew he was escalating and didn’t give a damn. That’s why he left Corrinna ripening in his bed for a couple of days before doing anything about it. I am pretty sure had he gone to the cops right away and spilled the beans, his charges would’ve been left at A&B and would’ve been chalked up as a sad, horrific accident.

The worst part of all of this is, Corrinna leaves behind a teenage daughter who had to learn the details of her mother’s demise through the mainstream media. I can’t even fathom losing my mom as a teenager, nevermind having to learn of her sexual proclivities that led to her demise with the rest of the world. Yikes. Poor kid, I hope she’s got a strong shoulder to lean on and a counselor on deck. I have a feeling Big Bubba is gonna show him what the other end of a choke and poke feels like. Mark my words, Jimmy James is gonna have the back end blown out of his striped pajamas, and he’s gonna rue the day he ever put his hands around a woman’s neck.