This Turtleboy luckily does not live in Worcester. Because, no offense, but you’d have to be an idiot to live in Worcester. Either that or you just enjoy paying property taxes and getting nothing in return. Your roads don’t get plowed, your schools are underfunded, and there’s potholes everywhere. But at least they’re spending all this money on corrupt non-profits, DOJ race discussions, and police on horseback, because there’s nothing Worcester likes to do more than pretend like it’s a real city.

So yea, I always have been and always will be suburban Turtleboy. I go into Worcester when I need something that they don’t provide in my town right outside. Today was one of those days, and once again I was reminded how much I enjoy not living in Worcester. Because today was trash and recycling day on the West Side, and when it’s windy like it was today, the streets of Worcester get littered with garbage as a result of Worcester’s recycling program. Just a reminder, the whole purpose of recycling is to save the environment. Not in Worcester though. Because Worcester is the only city in America where recycling leads to trash covered streets. That’s because you dolts are still using those stupid bins. And this is what happens to those bins when it gets windy: 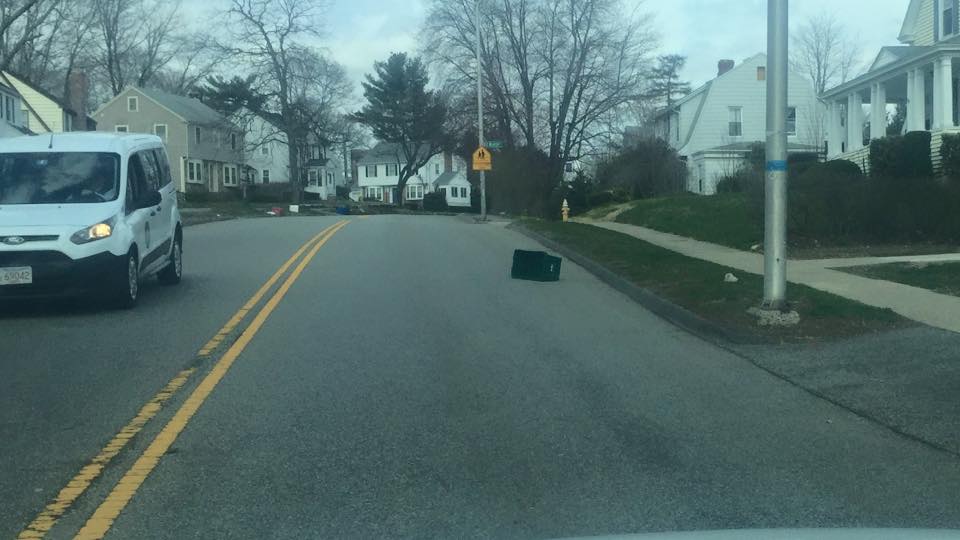 And you know those lazy pricks at Casella aren’t picking up ANYTHING that isn’t in the little bin.

Meanwhile in my town, and every other civilized place on earth, we have these magical recycling bins with wheels and tops that close: They’re wicked cool. They fit like, five times the amount of shit. You don’t have to pick them up since they’re mobile. And most importantly, wind doesn’t matter because they have tops that close.

I don’t get it. Why wouldn’t you have these things? The city OBVIOUSLY has the money since they’re willing to become a sanctuary city and risk losing $59 million in federal aid. The City Council just gave themselves a 100% pay raise. They just bought a bunch of horses and paid to have cops learn how to ride them. Surely they can spring for one of these things for each domicile. How much could it possibly cost? Either way, how is it not worth it? Driving through Worcester today all you saw was trash EVERYWHERE!! How do you expect to get people to move to your city or do business there when it’s covered in hobo juices and trash?

So yea, today was a reminder of how good life is when you don’t live in Worcester.