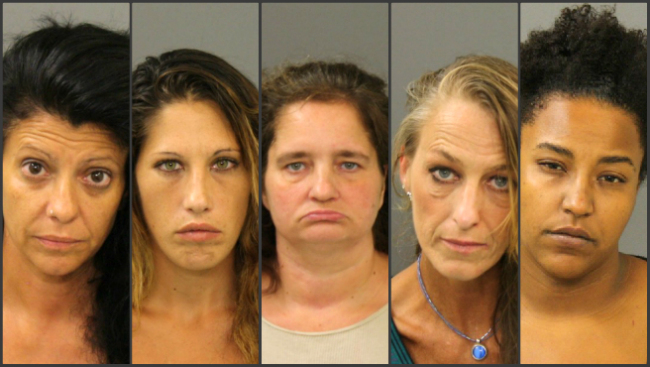 The New Bedford Guide published a story today about a prostitution sting in New Bedford:

Police have arrested five women in New Bedford after they’re accused of offering sex for a fee to an undercover male officer.

This is pretty routine to print the names of those arrested in a prostitution sting, but there’s two big differences this time around. First of all, there were no Johns arrested. The police literally created a crime that wasn’t there before they got there. It’s like walking into Main South, pretending to be a junkie, and asking some guy who is down on his luck where to find drugs. The cops shouldn’t be arresting people for a crime that they instigated.

The other thing that stood out is that the New Bedford Guide posted not only the arrested women’s names, but also their mugshots: Alright first of all, epic mugshots. Pretty much exactly what I expected a New Bedford brothel would look like. I know what 90% of you are thinking so we might as well ask it – how did #3 get into this line of work? I just can’t imagine business being very good for that poor woman. That frown is permanently glued to her face for a reason. And somehow number 4 is only 45 years old, but that’s 78 in New Bedford years.

Anyway, the posting of these pictures has sparked a debate on their Facebook page. Should they be posting the pictures of prostitutes? Seems to me like they’re kind of shaming the victims here. Because let’s be honest, if you’re a New Bedford prostitute, your life can’t get any lower. You’re doing what you have to do to survive and for some reason you’re being targeted and humiliated by the cops.

My question is, what does this accomplish? If you wanna get hookers off the mean streets of Bristol County then shouldn’t you be going after the Johns? These women are obviously familiar with the crack pipe and they’re willing to do pretty much anything for their next fix. They’re committing a crime in which the only victim is themselves. A crime in which one consenting adult and one desperate dope fiend bump uglies for a fee. It’s basically what every dude who has ever taken a woman out to dinner on Valentine’s Day has done. Minus the crack pipe.

Why not just use them as a narc? You know they’re hookers and you know they’re breaking the law. But going after hookers is like going after drug users instead of drug dealers. Why not offer to drop the charges if they turn in their pimp, or wear a wire the next time they’re strutting their stuff over the Fairhaven bridge?

Here’s the deal, I’m against police using a sting operation to arrest anyone for a crime that hasn’t been committed yet, unless you’re busting a child molester looking for kids online. Then it’s OK because you’re getting a monster off the streets. But what law was broken here? Seems like the cops were the ones who broke the law. They approached hookers and offered them money for sex. Then after they got the most desperate women on earth to holler for a dollar they say, “I’m just kidding, you’re under arrest.”

The problem is that they’re arresting them for taking money. There was no push-push, so how is this even considered prostitution? Prostitutes have sex for money. All these women did was take a handout from some guy. How do we know THEY weren’t just about to tell the cops, “I’m just kidding, I’m making a citizen’s arrest on you?” Because that’s basically what the cops did – pretended to solicit a prostitute only to change their mind at the last minute.