A few months back we wrote about this gravitationally challenged hambeast from Milford named John Moosey, who caught our attention when he wrote this underneath an article about an Auburn Police officer who was hit by a car: Oh, and it turns out he’s a level 3 sex offender: Ya see, not only was he charged with diddling a child, he was found guilty and convicted of indecent assault and battery on a child under the age of 14. He prays that bad cops die every day. Turtleboy prays that child molesting animals like him die a slow and painful death.

He also wanted to become a real cop and joined the Junior Explorers program, but most police departments have a “one chin allowed” policy that has prevented him from being hired. Well Gloppy McGee here is back in the news, and it looks like he’s gonna hate the police even more now, especially since the blog we wrote about him was part of the reason he was arrested:

A Milford man with a history of making anti-police statements and welcoming attacks against police officers is being charged with intimidating an officer who helped arrest him after an incident last fall. John Moosey, 30, of 1 Grove St., Apt. 2, is being charged with criminal harassment, intimidating a witness, juror, police officer or court officials and making annoying electronic communications. The police report on file in Milford District Court details a long string of incidents, including a blog post from Turtleboy Sports – a controversial local blogger – who posted a screenshot of a Facebook page believed to be Moosey commenting on a story about an Auburn police officer who was hit by a car.

“I pray every night that deserving bad cops get offed in heinous ways and smile when I see things like Dallas and Fort Worth on the news,” Moosey allegedly posted on Facebook, a reference to recent killings of police officers.

Stop right there. Turtleboy is not controversial. Everyone who is smart likes Turtleboy. Dumb people, sex offenders, racists, social justice warriors, con-artists, corrupt officials, and others trying to scam the system and rip off other people don’t like us. That doesn’t mean we are controversial. Anyway, check out what this idiot did this time:

The charges stem from an incident last October in which Moosey was charged after getting into a street fight with another man on Central Street. Officer Craig Stanley wasn’t the arresting officer, but assisted in the investigation. Police say last December, Moosey harassed Stanley in front of a Chinese restaurant on Main Street, alleging that Stanley parked his police cruiser illegally while picking up food for the day shift. Later that day, Chief Tom O’Loughlin received an email from Moosey complaining of the incident, according to a report. Police say that later in December, Stanley, assigned as the hearings officer in Milford District Court, presented evidence that concluded there was probable cause to arraign Moosey for an unrelated case that Stanley wasn’t involved in.

Two days after that, police were notified about a person named “John Moose” on Facebook posting “derogatory and slanderous remarks” about Stanley, including photos of him with his wife and family. One of the posts, a picture of Stanley with his wife, read, “This is corrupt Milford police officer Craig Stanley – drop him a line and thank him for his service! Clearly the dingbats also an alcoholic. Copblock network.”

I hate to be that guy, but the correct word the cops are looking for is “libelous remarks.” I know this because people accuse us of slander on Facebook on a daily basis. But slander is spoken defamation, which would render that impossible. Attorney Richard N. Vulva has found this out the hard way several times.

In February, police say Moosey yelled expletives at Stanley and called him a “pig” while the officer was responding to a call at a mental health treatment facility. In May, Stanley’s wife notified police that Moosey posted pictures and comments on Stanley’s personal Facebook page, including anti-police postings and other derogatory remarks. The poster, using the name Moose Freeman, also referenced recent deaths of unarmed black men at the hands of police officers. After a short exchange of Facebook comments, Stanley blocked the account, but “Moose Freeman” then began to “like” pictures on Stanley’s wife’s Facebook page.

Is there anything more emasculating than being a grown man still going through a cop block phase? I mean, I guess it’s kind of normal when you’re like, 19 to have a thing towards cops because they represent authority and took your Keystone Light. But if you’re in your 30’s and you’re still following cops around, taking pictures of the way they parked, it basically means you’ve never, ever gotten laid. Ever. Which would explain why he has to diddle little children to get his rocks off.

Anyway, this arrest opens up a whole new frontier for social media trolls. Kind of a weird spot for us because we kind of make a living being social media trolls. But at the same time we understand the law and we know there are lines you can’t cross. We can write about people like Gloppy McGee until the cows come home. That’s not harassment. But going to a person’s Facebook page and constantly writing false things about them (“he’s an alcoholic”) crosses that line. And honestly, if he did this to anyone but a cop, he probably wouldn’t be arrested. But that’s just how the world works people. If you pick fights with cops, don’t be surprised when they go out of their way to find something to arrest you for.

And since John Moosey can’t find a girl to play with his pickle, he has to resort to exclusively posting about the police 24/7 on Facebook: Don’t be surprised when the cops make arresting you a priority.

John Moosey is apparently wicked pissed at the Milford PD too, and has been talking about a Kevin Lynch-style massive civil lawsuit for some time now: In our first blog on Gloppy McGee we pointed out how he owned a Limousine Company: Well it looks like our blog did some damage, because Imperial Limousine is no longer in commission since publication: 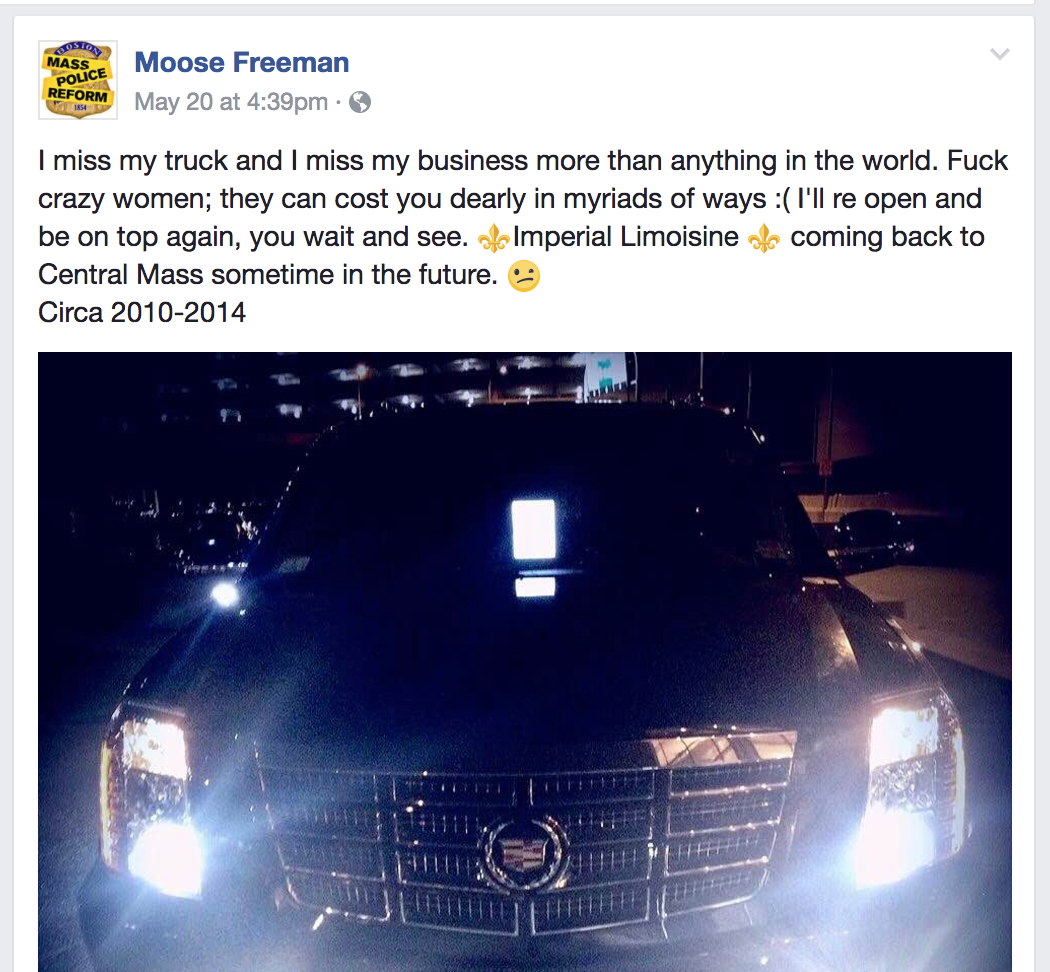 Don’t worry though, once he wins his massive civil lawsuit against the Milford Police Department he’s gonna have this business back up and running again in no time: Hey John Moosey, at the end of the day nothing you say matters. Not JUST because you’re a fat piece of shit who complains about the cops because you can’t be one. Nah, the real reason nothing you say matters is because you’re a Level 3 sex offender. You take away other people’s innocence. You can try to hide behind this whole “citizen journalist looking to expose corruption on the police” thing. But at the end of the day you’re just a child molester and an animal. And we will never, ever allow you to carry on as a respectable member of society.  You are a garbage human being who cannot be trusted to be around children, because the lonely, sad, pathetic appendage you call a penis can’t be trusted to stay in your size 48 waist pants.