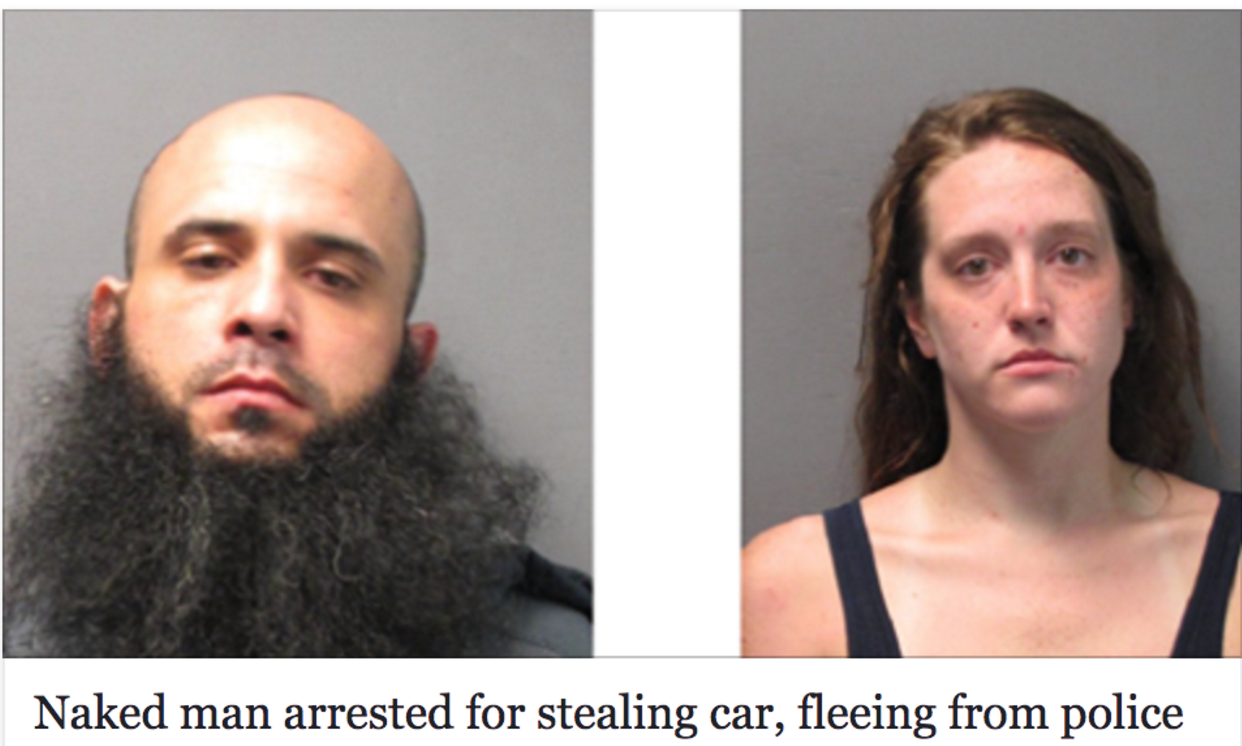 ABC 6: A Pawtucket man and a Wrentham woman were arrested Wednesday after fleeing from police. Pawtucket Police attempted to approach their vehicle at approximately 12:00 p.m. after discovering the 2013 Toyota Tundra had been stolen on Tuesday. The Toyota sped away and sent police on a chase from Pawtucket to Providence where the vehicle struck several parked cars in the process. The truck came to a stop on Nashua Street where Kenneth Polion, 34, of Pawtucket, exited the vehicle naked and fled down a steep embankment. Monica Ciannavei, 24, of Wrentham, exited the passenger side of the truck and was arrested by police. Of course he was naked. Why wouldn’t he be? The man just oozes sex appeal. No time for pants. We got cars to steal and people to kill!! I’m sure this is the first incident with this winner:

If you’re celebrating court on Monday then there’s a 99% chance you’re rocking a chinstrap. Hey Kenny, when you getting out cuz? Some of us like to share witty, satirical memes, even when they have to do with sex. Kenny just comes right out and says it, “I wanna stick it in her hole.” Nice.

Monica Ciannavei is a real winner too. It’s not her fault that she steals cars and uses other people’s credit cards to rack up thousands of dollars in bills. She has the “disease” that’s been going around. Yet according to this documentary she was featured in, she is “clean”: As you can see in the video, Monica says she loves working with kids in pediatrics. Which is great. Because I definitely want someone like this around my children in a healthcare environment.

Not her fault though. She wants congress to discuss more about how addiction is affecting families: Because it’s not her fault. It’s Paul Ryan’s. Oh, and she also has a backpage, which is how she raises money when she’s not stealing cars and credit cards Sleazy Top: How is backpage legal? I don’t get it. It’s not like it’s a secret club or anything like that. Any cop can go on one of these pages, call one of these broads up, and boom – arrested. They’re not exactly hiding.

Anyway, I do feel bad for people who are addicted to heroin. More than anything I feel for their families. But at the same time you gotta hold people accountable for their behavior. This chick is a menace. She’s obviously not interested in getting “clean” and as a result innocent people who made the choice NOT to do heroin are endangered. I hope she reads this. I hope she’s humiliated. Because being nice to these people clearly isn’t working nearly as effectively as public shaming does.