Five More Winners Arrested In Brawl Outside Mambo Drink, City And WPD Won’t Mention Mambo Drink Because That Be Racist Five More Winners Arrested In Brawl Outside Mambo Drink, City And WPD Won’t Mention Mambo Drink Because That Be Racist

City of Worcester:  On Saturday, July 29, 2017, at approximately 1:05 AM, several police officers out of the Operations Division along with officers working the overnight Bar Detail responded to Water Street for a large unruly fight. Responding officers observed a chaotic scene that involved several fights taking place Water Street. Many people were seen shoving each other and fighting. Numerous officers were on scene. Many officers gave verbal commands to cease their activities and disperse. The crowd refused. Officers began to break up the many physical altercations.

As a result of their behavior the following were placed under arrest:

Gee whiz, I wonder what bar they were coming from? Could it be the high class establishment, known for its world class clientele, that just so happened to be having yet ANOTHER special party with a special DJ that night? Nah, this would never happen at Mambo Drink. Nothing ever happens there. Except for all this stuff in the last calendar year: Of course they are allowed to get away with this for one reason and one reason alone – our leaders are gutless cowards who fear being called racist. And Mambo Drink knows this and frequently uses the race card to avoid sanctions. We know this because last year after the gigantic brawl broke out there was a meeting of Canal District business owners, with Chief Sargent and City Manager Ed Augustus. Instead of agreeing to crackdown on the one bar that was frequently a source of such lawless activity, Augustus, Sargent, and this moron, Canal District VP Ed Russo, put the blame on everyone:

Of course Ed Russo did this because as a dorky looking, sackless white chudmuffin, he was intimidated by Mambo Mafia when they showed up in wife beaters and flat brimmed hats, screaming racism. 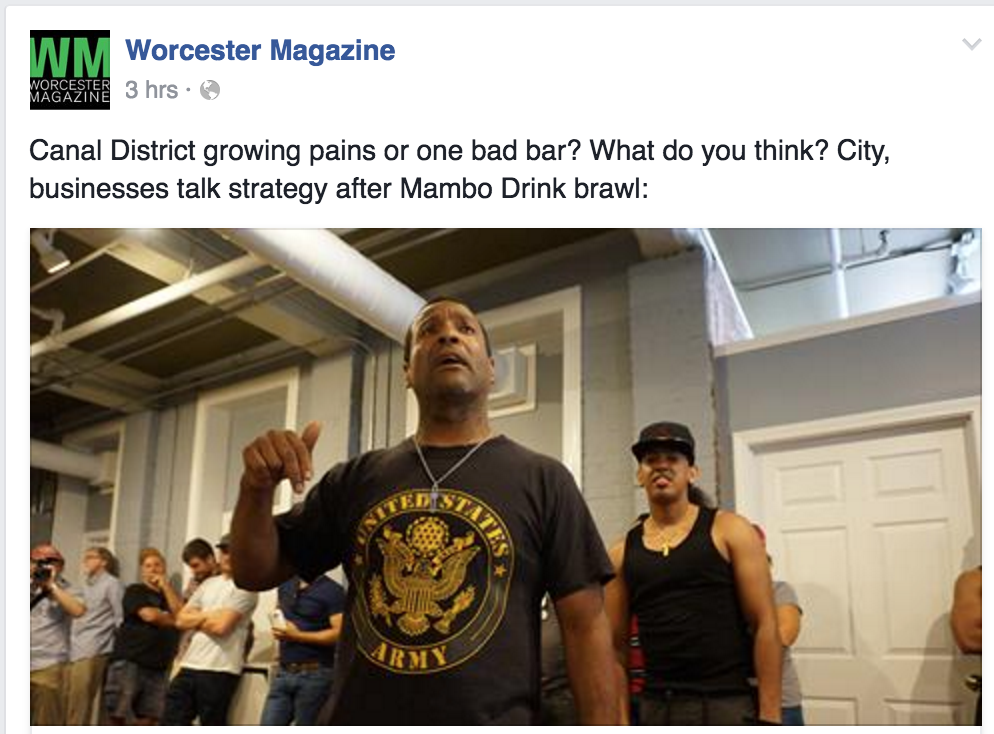 Here’s my question – why did neither the Worcester Police or City of Worcester press releases on this mention what bar these cretins were coming from? Could it be because they are once again scared of being called racist by this fine, upstanding Latino owned business? Nah, that can’t be it.

Here’s some of the winners who were arrested: If you’re attracting people from Webster to your bar, your bar should be shut down permanently. Just sayin.

You know she’s a winner because she uses the Facebook cat filter: Which is basically the flat brimmed Chicago Bulls hat for ratchet females.

She also is a mother: And may or may not have saved France from another terrorist attack. Obviously this woman is a great parent. Lots of great Webster moms get arrested outside of Mambo Drink for fighting rival ratchets over who stole whose food stamps. Oh yea, this guy is a real winner. I’m sure he was at the Blackstone Tap that night. He doesn’t strike me as the Mambo cilentele at all. That would be racist.

In the least surprising news ever he is both a sperm donor, and a fan of the official sportball team of ratchets everywhere: And he likes to drive around with his child in the backseat, while clearly NOT being impaired to drive at all: Bitch, you’re 39? Your old ass is too old to be getting in fights outside the club. This ain’t 1999. Ain’t nobody wanna see your wrinkled ass up in the club getting crunk anyway. Go back to the projects in West Boylston and drink your purple drank in the privacy of your own government subsidized home.

Had enough Worcester? This is what your city looks like under the current leadership of Joe Petty, Sarai Rivera, George Russell, and Ed Augustus. This is the kind of crowd they want to court. While they’re cutting ribbons, bragging about a “renaissance,” and telling you how safe Worcester is, they’re doing nothing about this one particular establishment that causes nothing but problems for the rest of the legitimate businesses in one of the most important economic centers of Worcester. The problem is right in front of them and they’re continuing to ignore it because they’re so afraid of being called racist. Why wouldn’t Mambo play the race card? It works every single time. Rules do not apply to them.

Here’s an idea – how bout the license commission does their fucking job for once? They have no problem shutting down Mahoney’s every time they let in a 20 year old Worcester State chick. Of course the license commission was entirely appointed by Ed Augustus, who was appointed by Joe Petty. So the only way to fix this problem is to elect Mike Gaffney mayor in November.