Wonder Weenie Of Water Wizz, Who Lied About Kidnapping Heroics, Was Threatened With Arrest By Wareham Cops And You Won’t Believe What For Wonder Weenie Of Water Wizz, Who Lied About Kidnapping Heroics, Was Threatened With Arrest By Wareham Cops And You Won’t Believe What For

I’m sure you all haven’t forgot about our friend Matt McGonnigal, our Knight in Shining Tin Foil, who said that he saved a child from being kidnapped at Water Wizz water park in Wareham. 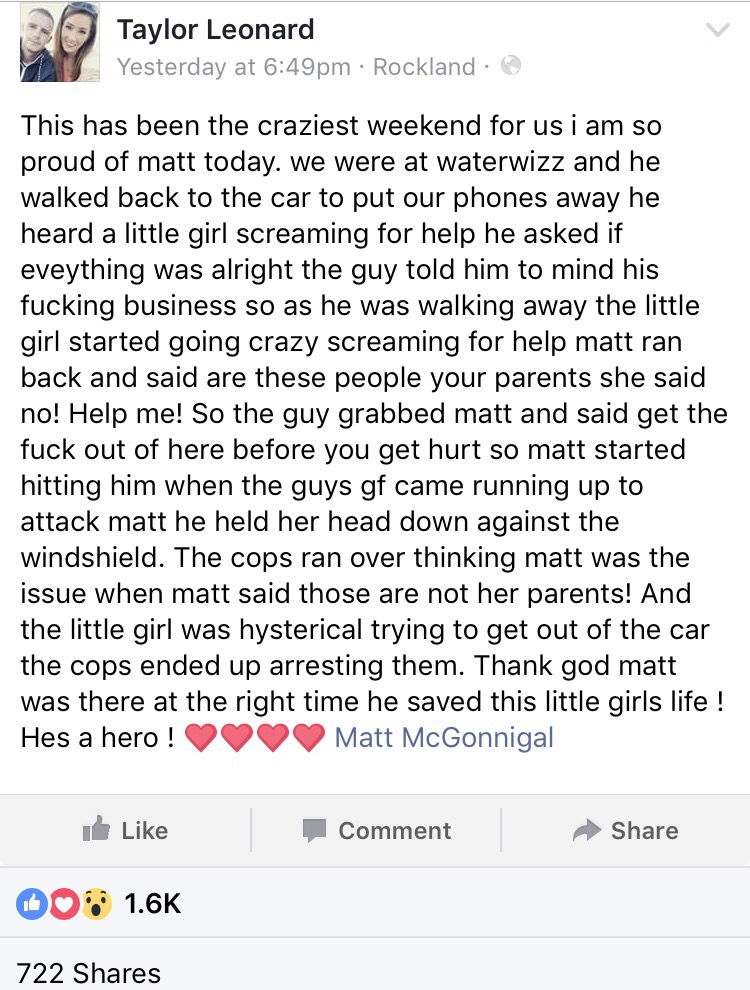 Chudstuffer Tells Baby Momma Tall Tale About Saving Girl From Abduction At Water Wizz, Her Post Goes Viral, Turns Out It Was All A Lie

This all took place a few days ago and if you missed the story you can read it HERE:

Which leaves us here. It has been DAYS and no one has come forward to say that Matt saved their child. Not a SINGLE human.

My original follow-up was going to be me making fun of Taylor and Matt’s Mom and friends sticking up for them. That was until someone sent me an audio recording Matt made illegally. It begins when he walked in to the Wareham Police Department pretending to try and get the police report of the kidnapping that didn’t exist. The police were not amused.

He was doing this to try and save face with his girlfriend.
Matt did not have the officer’s permission to record this. The voice from the police department stood by their statement that no such report had ever been filed. Matt kept pushing and sounding like a petulant child. Matt gets in an verbal (possible nearly physical by the sound of it) altercation with the fuzz and almost got himself arrested for not leaving the station when he was asked to. Here’s the audio:

It starts by Matt being told the officer watched the video from 1-4:30pm (where the fake kidnapping took place) and not a single cruiser comes in or out of the parking lot. Big shock.

Matt asks if the officer has the video. He the challenges the officer because he didn’t bring the video for Matt to watch.

Then it sound like Matt cuts a huge fart. Just sayin.’ Possibly dropping a fear turd.

That’s when someone, I assume, in command jumps in and starts asking if Matt is there to report a crime. It just goes down hill from there. Like fast. Matt claims that an officer took his verbal statement. That he didn’t report the crime but a cop witnessed the end of the fight he had with the kidnappers.

That’s when the authority figure tells Matt as far as he’s concerned he’s “a fucking liar.”

“You got a problem with your fucking girlfriend because now Facebook is tearing you apart…” you can hear the cop bark.

The cop is clearly a Turtle. Sup bae.

“I don’t care about Facebook,” Matt cries. “It’s to make my name right.” Matt is stammering so bad he can barely get a word in.

Someone else comes in asking if Matt was there to report a crime because he saw a kidnapping.

That’s when one of the cops tells him it’s time to go. They start escorting him out of the station.

“Why!? because I’m a liar,” Matt asks in a weenie scream.

“I am too,” Matt manages to spit out.

The officer marches him up the stairs, asks him (what we think is) one last time if he is there to report a crime, and Matt says “no.” Matt whines that he called the night before and someone told him he could pick up a police report. That it was on a recorded line. My guess Matt called to ask a general question about acquiring any kind of police report. I say that because his doesn’t exist.

By then the officer has officially had it. He tells Matt he’s about to be arrested for trespassing and homeboy is still whining. Matt keeps going until the cop tells him he’s not fucking around anymore and he needs to “get the fuck out of this building.”

The cop tells him not to “fucking come back because there is no fucking report.”

You can hear Matt storming away, telling the cop “fuck you” until he gets in his car, mutters “what the fuck” and shuts off the audio recorder.

This is 5:30 of straight GOLD. While you are all entertained – Matt is most likely going to be arrested for trying to show his ass because he is a liar. A liar who illegally recorded a station full of cops without their consent. BIIIIIG NO NO.

Matt, who insisted that he saw a kidnapping, never reported it. Even if he had seen one, and they didn’t have a report, Matt could have filed one. That doesn’t make him a hero does it? There was no disturbance.

Now, Matt knew he was going to piss the cops off because this whole kidnapping thing didn’t happen. He knew he would provoke a response. Matt got everything he wanted out of the visit but a Medal of Heroes. But he’s not that bright… He drove all the way from Weymouth to Wareham, with Cape traffic, to keep the facade going. Holy crap.

A rider got a more clear answer from the PD’s Facebook: 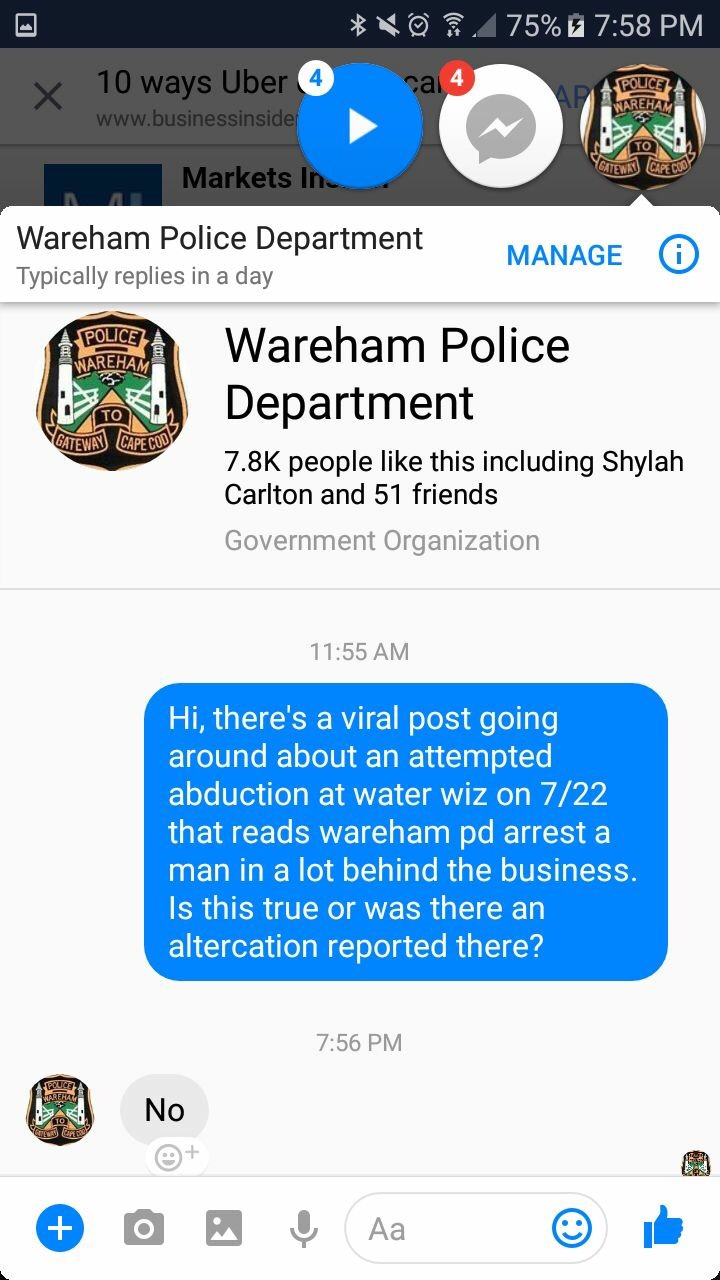 Before you have a flash of pity for Matt you should probably know that he decided to go after a young girl who spoke out against him. Not a single of the big dudes tearing him apart. A chick. Typical abuser behavior. Come at me and my turtle legion, bro. I’ll put your oxy-shriveled balls in the proverbial vice grip and watch the light fade from your eyes. Pick on someone your own size. You didn’t fight with a single dude talking trash. You went after a girl. You sent your brother, girlfriend and MOTHER in to the Internet masses and the only person you felt strong enough to try and intimidate was a girl. Hero my ass. No wonder you got popped on a domestic. Cry me a river, Sue. You raised this loser. Own it.

Call me silly but I’m kind of excited to hear when a warrant has been issued on this scrote wart by our boys in Blue down  in Wareham. Matt gets everything he deserves after this publicity stunt. This isn’t the last we’ve heard on this. Mark my words.