Add One To The Graveyard: Race Baiting, Turtle Obsessed Hack Clive McFarlane Got Shitcanned By The Turtlegram For Being So Dreadful

This breaking news brought to you by Bret Killoran: This is the greatest thing these eyes have ever seen. OG turtle riders will remember Clive “Spanky” McFarlane as one of our oldest rivals. We’ve written about him more times than I can count. His butthurt obsession with Turtleboy is a major reason this blog began to gain popularity and credibility. In March of 2015 he wrote this column “outing” me after a Buffalo blogger had done that 5 months prior. By that point he was sick of me calling out the fact that he is a one trick pony, and that trick is race baiting. 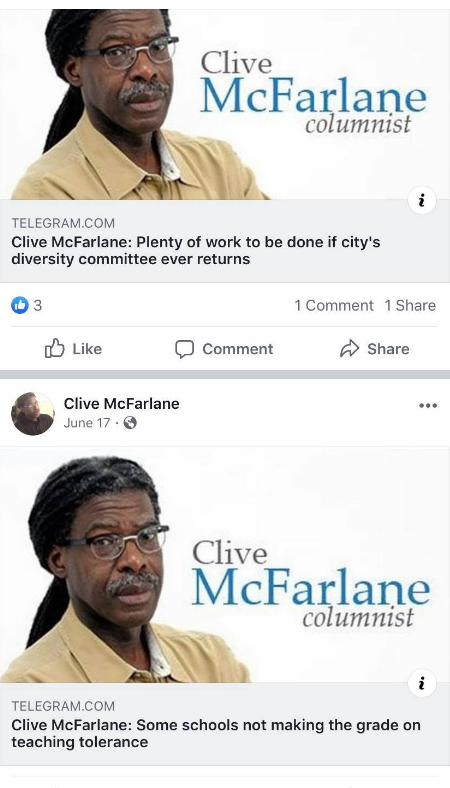 Literally everything to him was racist. Clive knew he couldn’t get to me, which is why he went after my mother for some reason in the first sentence of his hit piece.

“Aidan Kearney, son of former School Committee member Mary Mullaney, is the face behind TurtleBoy Sports, a crass and craven local blog that peddles the cheap thrills that dehumanizing groups and individuals bring to some people.”

I was 32 at the time, and my mother was no longer an elected official. It takes a special kind of untalented hack to pull the “yo mama” card.

He was always upset that legitimate members of the community read this blog that he thought was so beneath him.

What makes these callous and insensitive comments more troubling is that this guy, until recently a teacher at Shepherd Hill Regional High School, appears to have a fair share of enablers. So much so that he feels the blog is the true voice of the community, bragging of how warmly it and its cesspool of profanity-laden commentary are being received by judges, doctors, nurses, teachers, cops and firefighters.

Clive hated Turtleboy because we stood up for teachers at North High School who were being assaulted by students, and we called them words like “savages” because their behavior was savage. He hated that Turtleboy was growing in popularity while he was working in a dying industry; one in which he had a monopoly on public opinion as one of the featured columnists at our local newspaper. So he got desperate and spread libelous nonsense about me being sexual at a Bills-Patriots game.

Last October, his alleged lewd and intimidating behavior toward a young woman at a Patriots-Buffalo Bills game in Buffalo triggered an investigation by school officials at Shepherd Hill. Mr. Kearney, however, chose to resign rather than face the music.

Of course we now know none of that actually happened, and Clive knew it then. If I gave a shit or thought anyone cared what Spanky thought about anything I would’ve brought them to deformation court. If you want a good laugh read all the comments on the Turtlegram’s Facebook page when they posted this hot garbage.

It’s remarkable they took this long to fire him, and I love Gatehouse Media for it. Gatehouse Media is a predatory monopoly that buys up local newspapers, cuts the fat, and then puts in a paywall that only a moron would ever contribute to. The only thing they care about is money, and the fact of the matter is the newspapers hold onto people for years who don’t bring value to the company. No one reads Spanky’s columns, he wasn’t interesting, and this move should’ve been done years ago. There’s nothing I love more than watching mainstream media hacks who have been calling Turtleboy “not real journalism” lose their minds every time Gatehouse Media makes more cuts. The topping on the cake is that he didn’t get the goodbye column that everyone else gets, probably because they know he’d blame racism. Anyway, for those of you who are newer you may not remember our feuds with Spanky so allow me to bring to you the Top 10 Spank Butthurt Blogs About Turtleboy.

9. Spanky defends Mosaic Cultural Complex, calls Turtleboy racist after we exposed them for stealing money from the taxpayers. 8. Spanky sends a mob to harass our advertisers This is the blog, which, in response to Councilor Rivera’s concerns about civility, referred to her as “Pastor Sarai ‘ti-ti ho’ Rivera — the most cruel, venomous, evil, ghettofied city councilor that Worcester has ever seen.”

6. Clive becomes besties with a right wing conservative who was actively destroying the Spencer-East Brookfield Public Schools in an attempt to own Turtleboy.

5. The real source of Spanky’s anger towards the cops is revealed – his arrest for being kicked out of a bar for being a drunken fool. 4. Clive gets fooled into taking a picture with a Burncoat High School black student wearing an “I Am Turtleboy” shirt, and then wrote a column calling the kid just as dangerous as another student who brought a weapon to school. 3. Clive calls disgraced City Councilor a “slave master” after we nearly got him elected mayor (my bad).

2. Clive runs and hides from me at Turtlegram headquarters after writing a hit piece on me, then calls his lawyer like the bitch boi he is and gets a no trespassing order taken out against me. 1. Clive blames my mother for raising such a crappy kid after I had the audacity to support a white superintendent.